The King's Fund verdict is our take on the big questions in health and social care. Here we look at social care under the Labour and coalition governments, and at whether the system is sustainable in its current form.

The issue in a nutshell

As more of us live longer, the need for social care and support as well as health care is increasing.

Spending on social care began to fall in real terms from 2009, though it has fallen much more steeply since 2010, and fewer people are receiving publicly funded services. This has created mounting concern about the impact of these cuts on individuals and families and on the NHS.

The government says it will have provided an extra £2 billion each year for adult social care by 2014/15 – a total of £7.2 billion extra over the current Spending Review period. About half of this is money transferred from the NHS budget to support spending on social care that will also benefit the NHS (for example, reducing pressure on hospitals). The government claimed that this would be sufficient for councils to protect people’s access to services ‘if combined with a rigorous approach to efficiency’.

However, social care is funded in a completely different way to the NHS, with spending set by each local authority using a mixture of a central government grant and revenue from local tax and user charges.

In contrast to the NHS budget, which the coalition government pledged to protect from real-terms reductions in funding, financial support to local authorities from the government has decreased by 40 per cent over the current Spending Review period. Adult social care is the largest controllable element of a local authority’s budget and is not ring-fenced as part of the allocation councils receive from local government. This makes it almost impossible for councils to completely protect social care from cuts. In summary, since 2009/10: 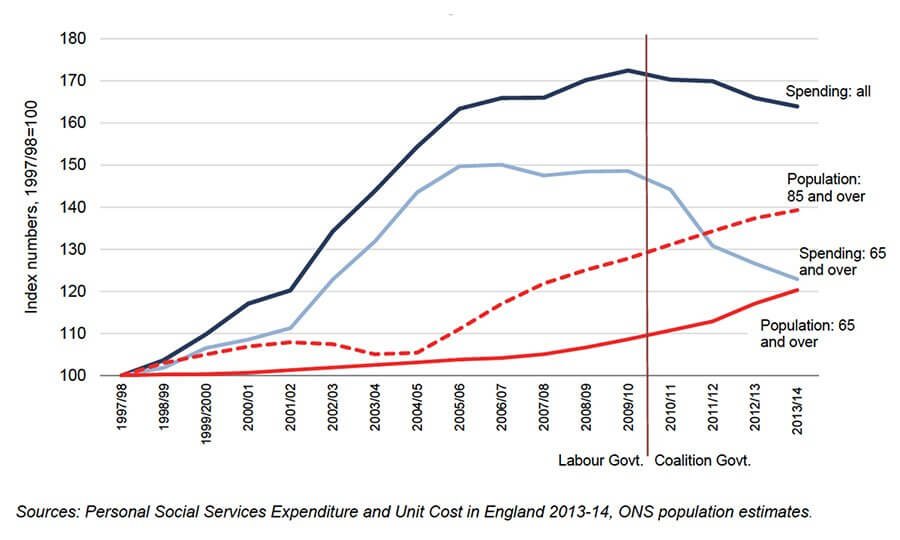 The impact of reductions on this scale is difficult to quantify but it has undoubtedly shifted the costs of care on to private individuals and their families and created greater reliance on unpaid carers (usually family members). The steepest reductions have been in community services such as home care and day care; alongside a 28 per cent reduction in district nurses since 2009, this will undermine the government’s aim of supporting people to remain at home and reducing hospital admissions.

There is concern about the impact of inadequate social care on hospitals. Some have argued that lack of access to social care is causing people to get stuck in hospital when they are ready to be discharged. However, in December 2014 the majority (66 per cent) of delayed discharges (or ‘delayed transfers of care’ using the official terminology) were because of NHS-related delays.

Social care was already under-funded when the coalition government came to power. Spending on social care for older people, and the number of older people receiving publicly funded care, began to fall during the past decade. But the fundamental inadequacy of social care funding has become much worse as a consequence of the fiscal reduction programme since 2010 and the impact of this on local government.

Adult social care has experienced an unprecedented five consecutive years of budget cuts. The Local Government Association estimates that social care faces a funding gap of £4.3 billion by 2020. We endorse the conclusion of the National Audit Office that neither national nor local government know how long the NHS and care system can continue to absorb these pressures.

The government has argued that existing resources will be used more effectively if health and social care services more joined up. It has designated 25 places as ‘pioneers’ to demonstrate innovative ways of achieving this. It is also introducing the Better Care Fund – a £5.3 billion pooled budget – from April 2015 to allow local authorities and clinical commissioning groups to spend jointly on social services and community services. However, following a redesign of the Fund in 2014, the priority has now shifted from improving local services through integration to reducing emergency hospital admissions and saving money, potentially placing even greater pressure on adult social care services.

The government fulfilled its commitment to establish an independent commission to review how social care should be funded and has pledged to implement a cap on care costs and more generous means-test thresholds from 2016. Major changes to social care funding have been enshrined in the Care Act 2014 – a significant achievement in creating a single, modern statute for adult social care that offers a stepping stone for wider reform of how social care is paid for.

But most people with care needs will not benefit from the changes, and the new funding system will be more complex to understand and administer than the current arrangements. The government’s funding reforms on their own will not solve the social care funding challenge: the deepening fault-line between universal NHS care and social care that is rationed to people with the highest needs and lowest means is not sustainable.

The King’s Fund endorses the recommendations of the Barker Commission for a new settlement, based on a single ring-fenced budget for health and social care, with a single commissioner for local services, and higher spending public spending on health and care phased in over a decade.

In summary, the government has made some steps in the right direction towards more integrated health and social care and protecting individuals from extremely high care costs.

But it has failed to protect adult social care from unprecedented cuts in spending, and the number of people getting publicly funded social care has fallen by a quarter despite growing demographic need. If reductions on this scale continue, it is difficult to see how the social care system or the NHS will be sustainable in their current form.

Our analysis of the big questions in health and social care for the 2015 general election.
Blog

The coalition has done well to pass the Care Act, but bigger change is now needed. In an ageing society social care has become too important to play second fiddle to the NHS, says Richard Humphries.

Has the government delivered a new era for public health?

The White Paper, Healthy lives, healthy people, published in November 2010, promised ‘a new era for public health, with a higher priority and dedicated resources’. Was this promise kept?

Social care and the election: we need to talk about the money

Former New York governor Mario Cuomo once said that politicians campaign in poetry but govern in prose. When it comes to social care issues in the current election campaign, most UK politicians are struggling with even basic literacy.
Blog