The King's Fund verdict is our take on the big questions in health and social care. Here we tackle the thorny issue of how much money the NHS needs.

The NHS is going through the biggest financial squeeze in its history. Since 2010, its budget has increased only marginally in real terms. While this is generous compared to other areas of public spending, many NHS organisations are already overspending. Increasing demand for care means that, without a significant increase in the NHS budget, a funding gap will open.

Financial pressures are growing, with large numbers of hospitals now in deficit. At the same time, NHS performance is beginning to slip, with A&E waiting times at their highest level at this time of year for a decade and target waits for hospital treatment, diagnostic tests and cancer treatment being breached on a regular basis. Looking further ahead, pressure to spend more will grow as the costs of treatment rise, public expectations increase and the population continues to age.

Why is this happening? Since 2010, the NHS has had an unprecedented funding squeeze. Over the period between 2010/11 and 2015/16, the NHS budget will have increased by £6 billion in real terms – an average of 0.9 per cent a year. This is significantly lower than the long-term average increase in NHS spending which is 4 per cent.

At the same time demand for services is rising – the number of referrals, admissions and outpatient attendances have been rising steadily over the last few years, adding significantly to the pressures on hospitals. This growth now appears to be accelerating, placing further pressure on the system. The tragic events at Mid Staffordshire NHS Foundation Trust have also meant that, faced with a choice between safeguarding quality of care and balancing the books, acute hospitals are choosing the former and recruiting extra staff. 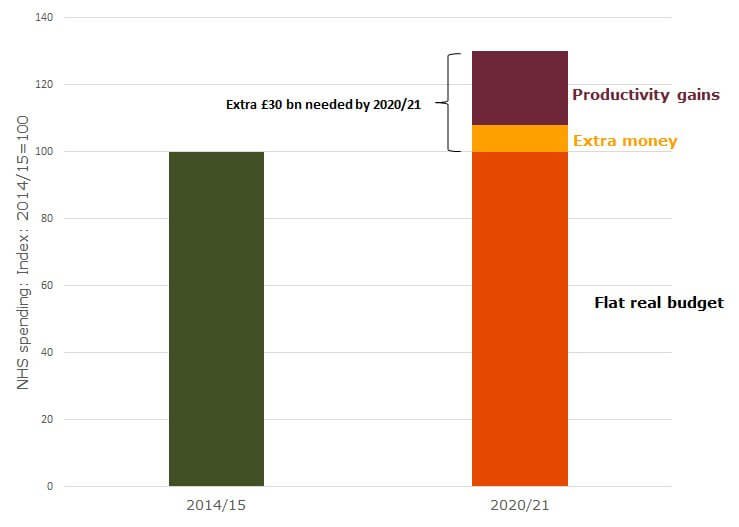 The NHS five year forward view, published in October 2014, set out different scenarios to estimate how much funding the NHS would need by 2020/21. Based on current trends in demand, with just enough money to cover rising pay and prices and no productivity improvements, it estimated that a funding gap of £30 billion would emerge by the end of this period. Its most optimistic scenario estimated that productivity improvements of 2-3 per cent a year (significantly higher than the 0.8 per cent the NHS currently averages) could reduce this gap by £22 billion, leaving an additional funding requirement of £8 billion a year by 2020/21.

Even under the most optimistic scenario outlined in the NHS five year forward view, an additional £8 billion a year in funding will be needed by 2020. New funding will also be required to establish a transformation fund early in the next parliament to help meet the costs of developing new community-based services and double-running during the transition between old and new models of care. With deficit reduction still a high priority, finding this money will not be easy. However, unless it is found, patients will bear the cost as staff numbers are cut, waiting times rise and quality of care deteriorates.

Our analysis of the big questions in health and social care for the 2015 general election.

How far has the government gone towards integrating care?

Here we take a look at how far the coalition government went in its efforts to develop integrated health and social care services.

Is the NHS heading for financial crisis?

Tight control over pay and prices together with cuts in management costs meant that NHS performance held up well for the first three years of the last parliament. But both performance and financial control have since declined.

Did the government meet its pledge to increase real terms spending year on year?

The King's Fund verdict is our take on the big questions ahead of the general election in May 2015. Here we look at whether the government has met its pledge to increase real terms spending year on year.