The King's Fund verdict is our take on the big questions in health and social care. Here we look at whether the government has met its pledge to increase real terms spending year on year.

The coalition agreement adopted the Conservative party’s 2010 general election campaign pledge that funding for the NHS should increase in real terms in each year of the parliament.

But the future is always hard to predict. The silver lining of the longest recessionary period since the beginning of the 20th century was lower-than-forecast inflation, and consequently higher-than-planned real increases in NHS funding.

Overall, over the five years of this parliament, English NHS funding will have increased by around 0.8 per cent per year on average – an additional £890 million a year in real terms. However, year to year, changes in funding have been somewhat erratic. In 2010/11 (a year where spending, the government could argue, was determined by the previous administration) there was a real cut of around 0.7 per cent, and in 2013/14 a real rise of around 2.4 per cent.

Changes in accounting and policies to transfer some NHS-allocated funds to local authorities have added a layer of complication to understanding NHS funding over the last few years. These funds have ranged from around £0.6 billion to nearly £1 billion a year since 2011/12.

This grey area of overlapping budgets will become more pronounced next year. The government’s planned spend on the NHS in 2015/16 is £116.6 billion. This provides the NHS with an additional £2.1 billion as set out in the 2014 Budget, an extra £1.29 billion announced in the 2014 Autumn Statement, and an additional £250 million for mental health services announced in the 2015 Budget. This amounts to a real-terms increase of around 1.5 per cent (£1.7 billion). But next year will see the earmarking of £5.3 billion of pooled NHS funding to be spent jointly with local authorities as part of the Better Care Fund’s integration programme. Of this £4.2 billion will come from the NHS and £1.1 billion from local authorities. While there should be benefits to the NHS emerging from the Better Care Fund, there will also be opportunity costs. 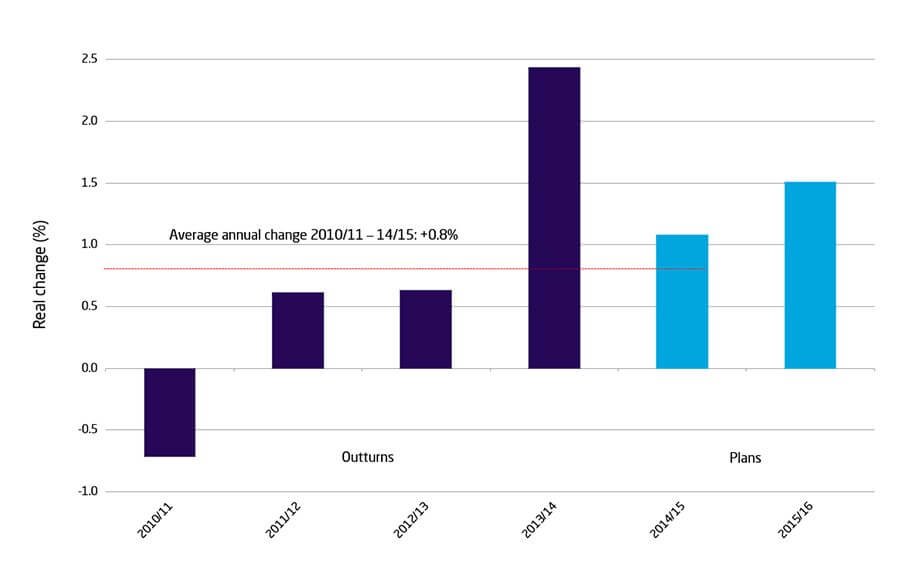 Strictly speaking, the government has not met the letter of its pledge as there was a real cut in spending in 2010/11. However, it has met the spirit of the promise across the whole parliamentary period. Funding has in fact increased more than was planned, due mainly to lower-than-forecast inflation. None of this has exempted the NHS from having to make huge efforts to make ends meet as demand grows during a prolonged period of funding restraint.

Our analysis of the big questions in health and social care for the 2015 general election.

How serious are the pressures in social care?

The coalition government made some steps in the right direction. But it failed to protect adult social care from unprecedented cuts in spending, and the number of people getting publicly funded social care has fallen by a quarter despite growing demographic need.

Has the government put mental health on an equal footing with physical health?

Some specific achievements have been made in recent years. However, the increased attention now being placed on mental health has come late in the parliament, and there remains a gap between rhetoric and reality.

Has the government delivered a new era for public health?

The White Paper, Healthy lives, healthy people, published in November 2010, promised ‘a new era for public health, with a higher priority and dedicated resources’. Was this promise kept?