Advances in diagnosis and treatment have led to reductions in premature deaths from major causes such as heart disease, strokes, respiratory disease and infectious disease, as clearly seen in the trend graphs below.

Male age-standardised mortality rates by major cause, England and Wales 1951-2010 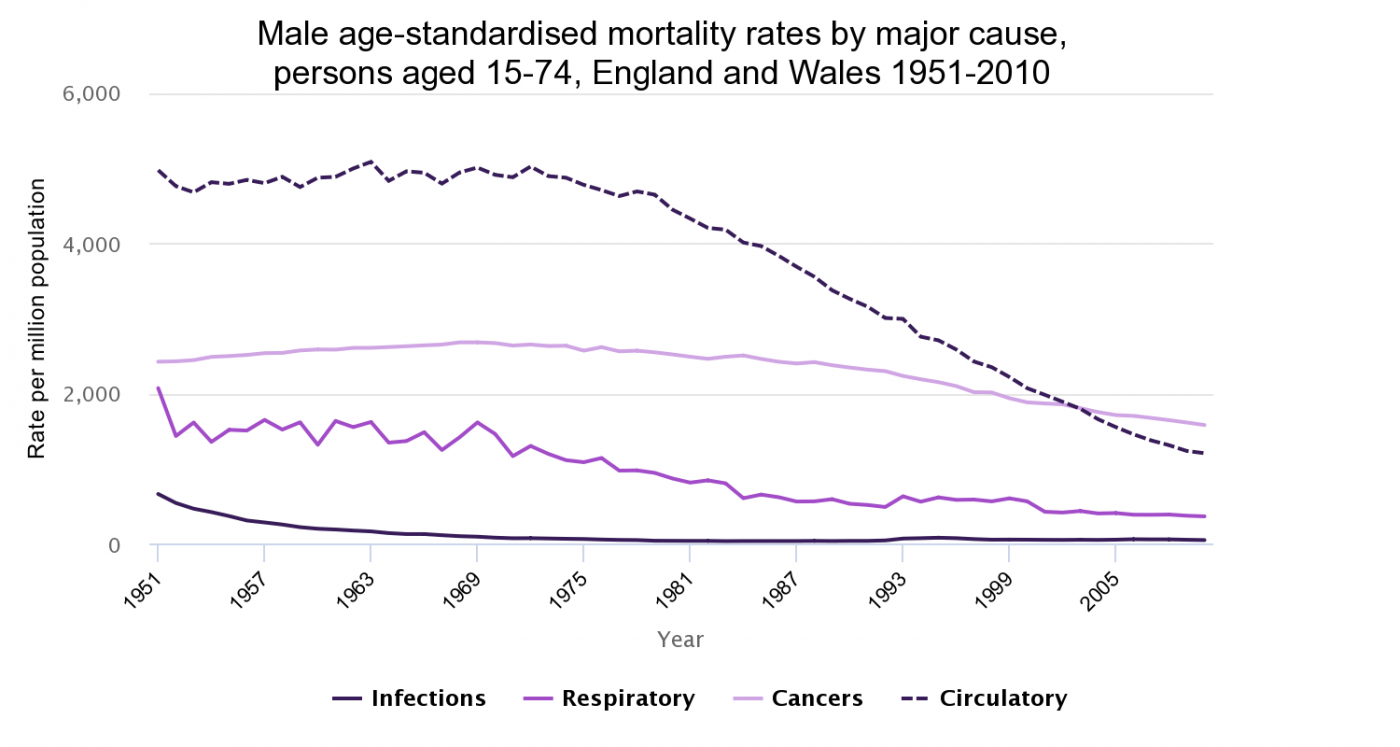 Female age-standardised mortality rates by major cause, England and Wales 1951-2010 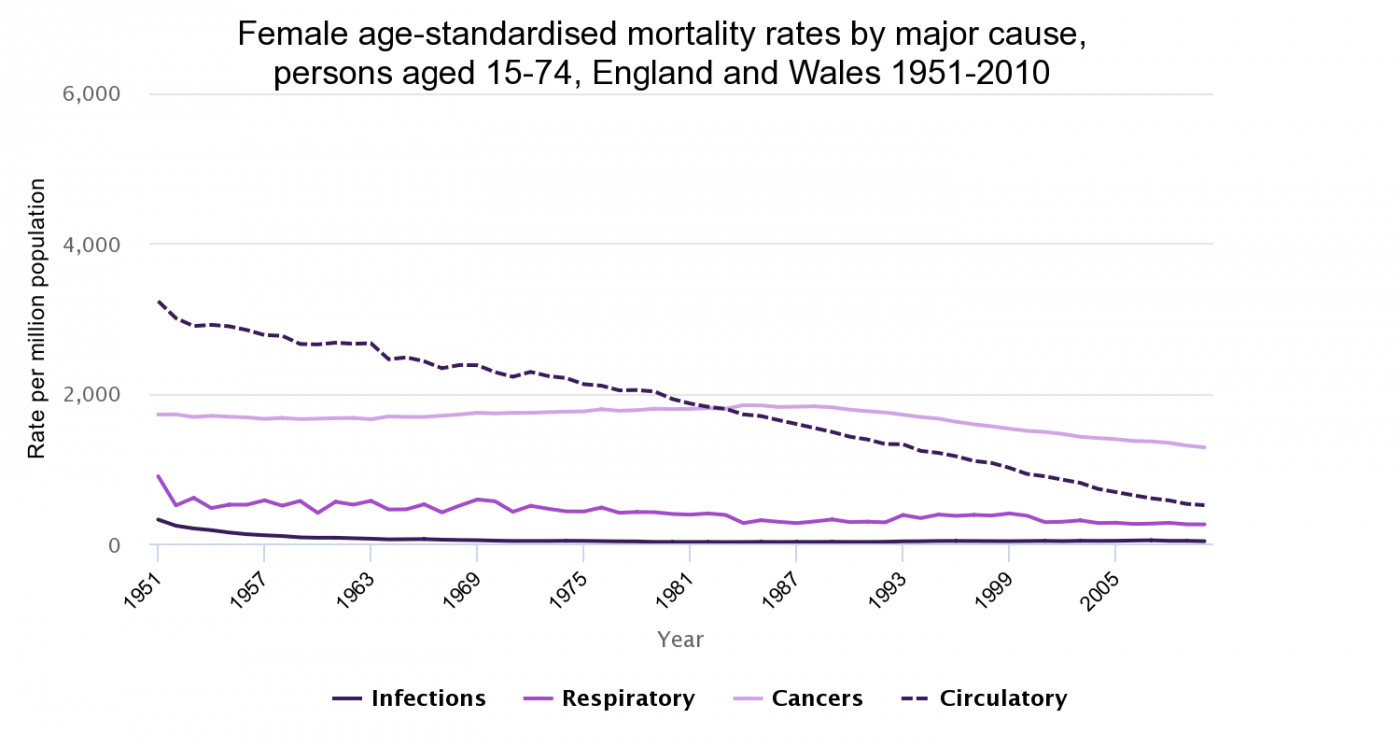 The burden on health and social care is high: 1 million people are disabled by their neurological condition and 350,000 require help with daily activities (4) – and as many as 1 in 10 emergency medical admissions are for neurological problems (5).

Prevalence rates for Parkinson's disease in the UK, 2009 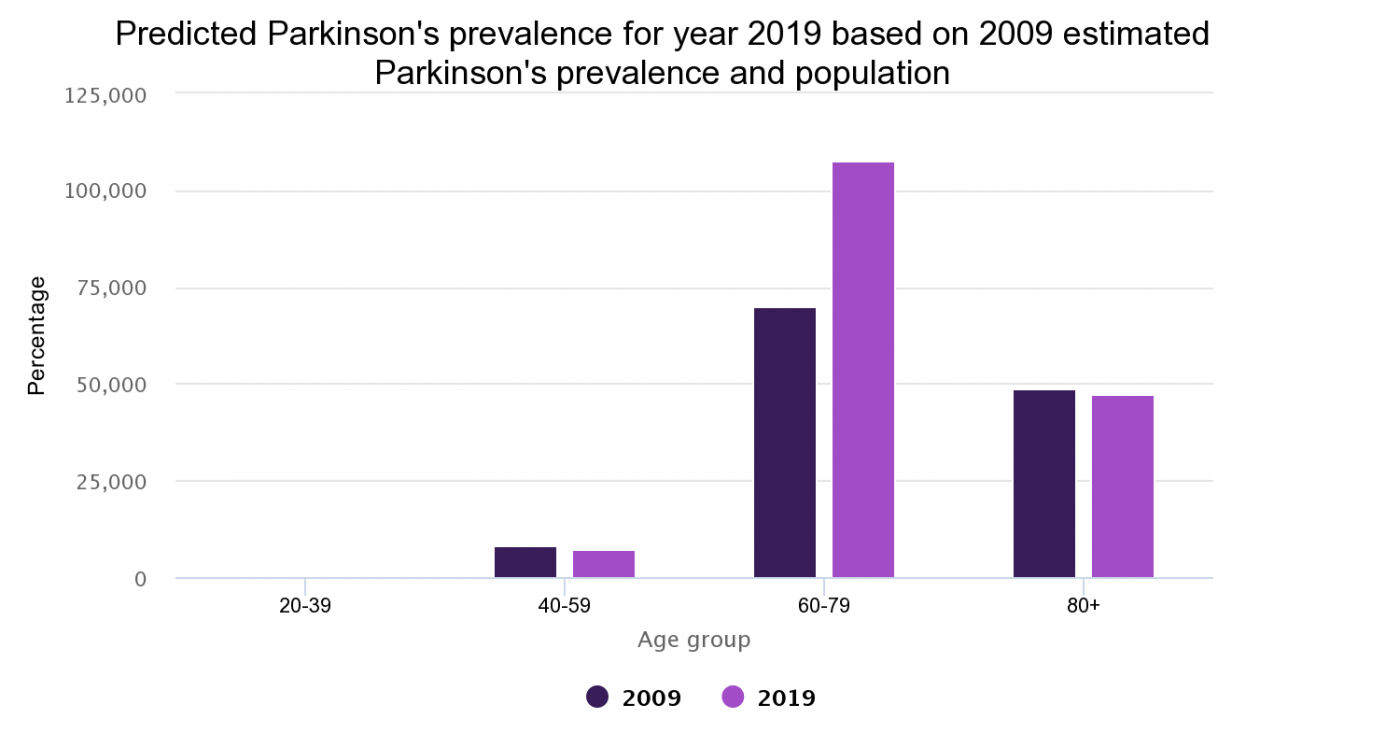 Osteoarthritis (a degenerative disease of joints, causing pain and stiffness, and leading to a decline in physical function) is the most common reason for hip or knee replacement (7).

Back pain affects 4 out of 5 people at some time in their life; 2 out of 5 have had back pain for more than a day during the past year (8).

Osteoporosis (a reduction in bone mineral density which increases the risk of bone fractures especially after falls) is estimated to cause one in two women and one in five men over the age of 50 to break a bone (9). In the future computer-aided diagnosis could become useful in the detection of osteoporosis.

There are currently no cures for many musculoskeletal diseases – intervention for osteoarthritis, for example, concentrates on trying to avoid or delay the need for joint replacement.

Respiratory diseases kill one in five people in the UK and cost the NHS more than £6 billion.

In 2004, an estimated 1 million hospital admissions, 24 million GP consultations  and more than 62 million prescriptions were for respiratory diseases, and respiratory conditions are the most commonly reported long-term illness in children and babies (12).

Around 835,000 people in the UK have been diagnosed with COPD, but there may be an additional 2 million people living with the disease who have not been diagnosed. The prevalence of COPD is projected (model-based) to rise from 1.6 million in England in 2010 (including undiagnosed cases) to 1.8 million in 2020  (13).

It is estimated that 5.4 million people in the UK are currently receiving treatment for asthma – 1.1 million children and 4.3 million adults. The number of children with asthma has declined since the early 1990s, as has the prevalence in adults. A risk factor for asthma is deprivation, with prevalence highest in the lowest income quintiles. The number of deaths from asthma is relatively small – 955 in England in 2010 (14).

The major diseases of the heart and circulatory system – coronary heart disease and stroke – are the biggest causes of death in the UK.

Coronary heart disease and stroke are caused by the same condition – atherosclerosis, which is the narrowing of the arteries with fatty materials called atheroma. Other heart and circulatory conditions can be caused by congenital heart problems or infections, or follow a heart attack. Heart failure is one of the most common long-term conditions, affecting around 670,000 people in the UK (15).

The prevalence of coronary heart disease increases with age, and lifestyle factors such as diet, physical inactivity, obesity, high blood pressure, smoking and alcohol significantly increase the risk, with smoking the most significant risk factor.

But the mortality rates have more than halved between 1993 and 2010.

More than half of this reduction (58 per cent) is attributable to reductions in major risk factors, principally smoking, and the rest to treatments, including secondary prevention (16).

As in many disease areas, the prevalence and incidence of coronary heart disease is not equally distributed in the population, and 32 per cent of people with heart disease in the most deprived areas also have a co-existing condition versus 16 per cent in the most affluent areas (17).

Medication can lower cholesterol levels and blood pressure and reduce the risk of heart attacks; an estimated 4.2 million people in England are taking statins to reduce their cholesterol levels (18). Recent clinical trials indicate that a 'poly pill' may reduce the risk of heart attacks and stroke by up to 80 per cent (19). In the past 10 years the proportion of patients over 75 who suffered from heart disease and had heart bypass surgery increased from 2.2 per cent to 10 per cent (15).

In the longer term, stem cells may allow hearts or other tissue to be grown for transplantation (20); gene and cytokine therapies could become an alternative to angioplasty or bypass surgery, and may even do away with the need for some drugs (21).

Mortality rates from stroke halved from 1993 to 2010, and this trend is expected to continue as a result of continued improvements in treatment. Many conditions that contribute to the risk of stroke can also be managed with medication (22).

There is likely to be a growing burden of heart and circulatory disease arising from the ageing population and lifestyle factors. However, modest reductions in cholesterol levels, blood pressure and smoking could reduce deaths from cardiovascular disease. Reducing obesity would also make an impact.

It is estimated that over 1 in 20 people in England has diabetes (diagnosed and undiagnosed) (23).

Diabetes mellitus is characterised by raised blood glucose levels. There are two types, type 1 and type 2:

An increasing number of children are being diagnosed with diabetes. There are almost 23,000 people under the age of 17 with diabetes in England (97 per cent have type 1 diabetes, 1.5 per cent type 2 and 1.5 per cent are recorded as 'other') (24).

Effective disease management is critical to the success of current treatment regimes. The development of remote monitoring devices will support this (25).

Complications and risks from diabetes

When diabetes is poorly managed, it can have serious complications, including heart disease, stroke, blindness, kidney disease, nerve damage and amputations, leading to disability and premature mortality (26).

Treatment aims to prevent or slow down the progress of complications. Diabetes also increases the damage done by some of the major risk factors for coronary heart disease – smoking, high blood pressure and high cholesterol. Average life expectancy is therefore reduced, by 20 years in people with type 1 and by 10 years in those with type 2 diabetes (23). The mortality rate for diabetes in England has fallen recently, but more than one in ten (11.6 per cent) deaths among 20-79-year-olds can be attributed to diabetes (27).

A number of medical advances aim to improve prevention and health outcomes for diabetes. Clinical trials are under way for artificial pancreas systems, which deliver insulin and glucagon in response to blood sugar levels, while transplantation of insulin-producing islet cells or pancreatic stem cells could provide a cure for type 1 diabetes. Personalised genomic profiling will be able to indicate a pre-disposition to diabetes and suggest appropriate preventive measures. Alternative methods of delivering insulin, including inhalation and oral administration, could replace the need for injections. Research into the regulation of insulin gene expression and the process of insulin synthesis could identify pharmacological means to enhance insulin output in type 2 diabetes (24).

Overall there will be a growing burden of disease linked to the increased prevalence of diabetes, caused by both the condition itself and its associated complications. This burden can be reduced by tackling the high prevalence of obesity and by good management of diabetes.

There are more than 200 types of cancer that can occur anywhere in the body; each has different causes, different symptoms and requires different treatment. Evidence suggests that half of all cases of cancer could be avoided if people made changes to their lifestyle. Tobacco smoking alone is estimated to cause more than a quarter of all deaths from cancer (29). The other major factor is age: 63 per cent of cases are diagnosed in people aged 65 and over (30).

Overall incidence of cancer has increased by almost a third since the mid 1970s, but the rates have been fairly stable since the late 1990s and are expected to remain so. This is because the incidence of some cancers has reduced as the incidence of others has risen. For example, there have been large increases in the incidence of some potentially avoidable cancers over recent years – such as malignant melanoma, liver and oral cancers – but a reduction in male lung cancer and stomach and bladder cancers (30). See the percentage change in incidence rates for the 20 most common cancers

Actual and predicted incidence in the UK of all cancers

While incidence rates are stable for different ages groups, the number of new cases of cancer is predicted to rise significantly between 2011 and 2030, mainly due to the ageing population. Deaths from cancer in the UK have fallen by 20 per cent over the past 30 years and by 9 per cent over the past decade. If England was to achieve cancer survival rates at the European average, an additional 5,000 lives would be saved per year and at the European best, an additional 10,000 lives. The current strategy is to save an additional 5,000 lives each year by 2014/15 (31).

At present there are approximately 1.8 million people living with a diagnosis of cancer in England. The number of cancer survivors in England is expected to nearly double to 3 million by 2030. This rise is significant as people who have survived cancer often have worse health overall than the rest of the population and make more use of all types of health care. The effects of cancer treatment can persist for years- lymphoedema, bladder and bowel problems, and infertility. Cancer also often leads to psychosocial problems (31).

The effects of living with cancer 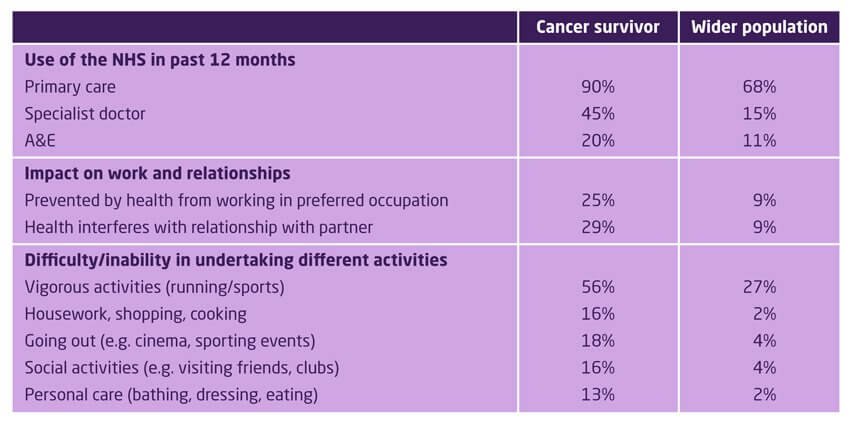 Scientists are optimistic about the future of cancer treatment. Expanding knowledge of genetics can help to predict an individual's risk of developing cancer, detect and diagnose cancer early, and select treatments that are most likely to be effective (31). Increased understanding of the underlying cellular processes would also enable treatment to fix the specific molecular problems in a tumour that drive its growth. Ultimately the genetic revolution may lead to ways of preventing cancer, such as cancer vaccines (32).

Within the next decade new imaging techniques and computer-assisted diagnosis should be able to detect irregular growth very early, while treatments such as high-intensity, focused ultrasound and the CyberKnife could be used more widely to target tumours without damaging healthy cells (33).

While the incidence of cancer is relatively stable, the number of cases is rising. Cancer, once fatal disease, is becoming a chronic disease with a burden of long-term ill health associated with it.