Incidence of sexually transmitted infections is high and has been increasing in England for the past 20 years (1).

Rates are also increasing among older groups – where the incidence rate has more than doubled to 13,000 (for those aged 45 and over between 2000 and 2009) (2). Traditionally public health campaigns are not aimed at older age groups (2,3).

A key concern in the treatment of sexually transmitted infections is the emergence of multi-drug resistant gonorrhoea (4).

The number of people living with HIV has more than doubled in the past 10 years, but the number of cases of AIDS has remained stable.

HIV (human immunodeficiency virus) is a virus that infects and gradually destroys the cells of the body's immune system. When the number of these cells drops so low that the immune system is weakened, the patient is vulnerable to multiple diseases, such as cancer and pneumonia, a condition that is called late-stage HIV or AIDS (acquired immune deficiency syndrome) (5,6).

More than 6,000 new cases of HIV are diagnosed every year in the UK, and despite sexual health promotion, a recent decline appears to be levelling out (6). Just over half of people diagnosed in the UK acquired the infection here (1).

HIV and AIDS diagnoses and people living with diagnosed HIV in the United Kingdom, 2001-2010 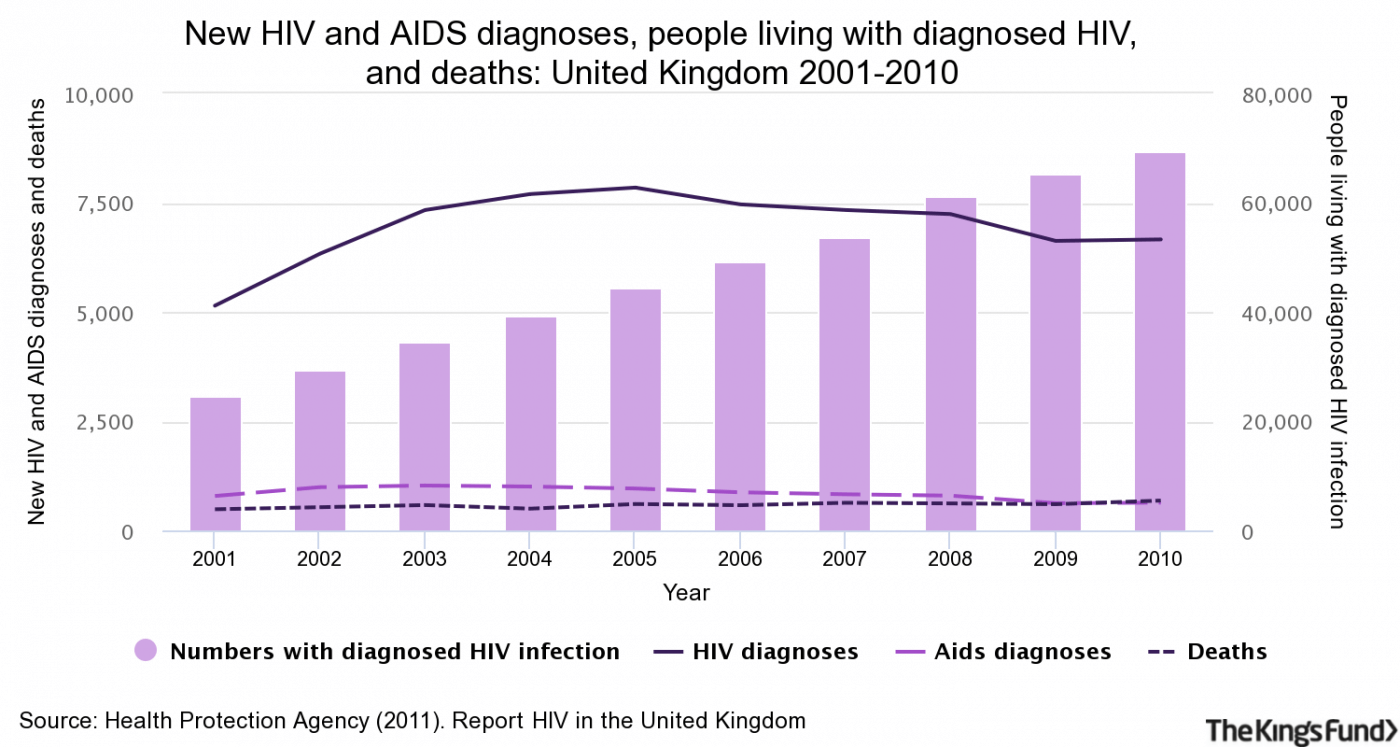 However, the number of people dying due to late-stage HIV or AIDS has not risen since 1998, mainly because of the effectiveness of HIV drugs. There is a rising number of people living with HIV – more than double the number 10 years ago (6) – who have an ongoing need for health and social care.

HIV has a greater impact in urban areas, and this is unlikely to change. About 40 per cent of HIV cases are within London, with certain boroughs having a particularly high prevalence (7).

New or re-emerging infectious diseases are unpredictable in their timing and impact.

The impact of new and re-emerging infectious diseases in the future is uncertain.

SARS emerged in Guangdong province in China in 2002 and rapidly spread to many other countries, including the UK, causing more than 700 deaths worldwide (8). But new strains of flu will not neccessarily transmit to humans: bird flu first emerged as a threat in 1997 and again in 2003, but has not yet caused a pandemic, while swine flu caused an immediate pandemic in 2009 (9,10).

There are also threats from re-emerging communicable diseases, such as tuberculosis (TB), which were previously thought to be controlled in the UK (11). The highest rates of TB are in London, with major problems in certain boroughs: homeless people, prisoners and problem drug users are at particular risk (12). Rates are also 21 times higher in those born outside the UK than those born in the UK, with most people affected by TB coming from South Asia and sub-Saharan Africa (11). Although migration is high in London, other urban areas have significant problems with TB – for example, 11 per cent of cases in 2010 were in the West Midlands (11).

Antibiotics kill or interfere with the growth of micro-organisms, especially bacteria. Since the introduction of penicillin in the 1940s, antimicrobial medicines have been used to treat many infectious diseases including pneumonia and TB.

Antimicrobial medicines also help reduce the risk of complications after surgery and chemotherapy and support the care of premature babies.

In recent years microbes have emerged that are resistant to antimicrobial medicines, making these treatments ineffective and enabling infection to spread. Some bacteria are naturally resistant; new resistances also arise spontaneously and then multiply. An estimated 25,000 patients die in the EU each year from multi-drug resistant bacteria (13).

The more antibiotics are used, the greater the risk of resistant strains developing. The resistant bacteria then spread through direct contact. Resistance is a particular problem in hospitals and places like care homes for older people, where vulnerable people are gathered together. Patients in hospital also often need antibiotics, and intensive use means resistant bacteria are more likely to emerge. The problem is compounded by failure to develop new antibiotics that can deal with the new resistant strains.

The European Union and the World Health Organisation have both identified antimicrobial resistance as a priority. The current focus is on improving surveillance, reducing unnecessary prescribing of antibiotics and supporting the search for new antibiotics (13).

The impact of infectious diseases in the future is uncertain, it is also possible that some existing communicable diseases may be eradicated.

Funding cuts to England's sexual health service are having an impact on provision. Against this background, the Health and Social Care select Committee’s inquiry is extremely timely, and we welcome the opportunity to contribute to this.
Blog

There have been deep spending cuts to sexual health prevention services that work to promote safe sexual behaviour. Ruth Robertson looks at the data.
Blog

Dr Tom Beaney, a GP trainee working in The King's Fund policy team, reflects on new data from the Positive Voices survey and considers the stigma that people with HIV face within the health service today.
Blog

Alex Baylis calls for effective national and local leadership in HIV services, as new figures show a fall in new diagnoses in gay and bisexual men.