There is strong evidence that access to green spaces improves mental health, although the evidence that it increases physical activity is less strong (1). Use of green spaces is associated with: a decrease in health complaints, improved blood pressure and cholesterol levels, reduced stress, improved general health perceptions and a greater ability to face problems (2).

Use of green spaces

The use of green spaces is slowly increasing. In 2011, 56 per cent of people surveyed said they used public gardens, parks, commons or other green spaces at least once a week; in 2009 this was 48 per cent. Twenty-one per cent of respondents reported using green spaces less than once a month or never, compared to 26 per cent in 2009 (3).

People in higher socio-economic groups make more use of green spaces than those in lower socio-economic groups. Sixty-three per cent of people in social grade AB (managerial and professionals) said they visited green spaces on a weekly basis, compared with 47 per cent in grade DE (manual workers, shop workers, apprentices, casual labourers, state pensioners and the unemployed).

Frequency of visits to public gardens, parks, commons or other green spaces 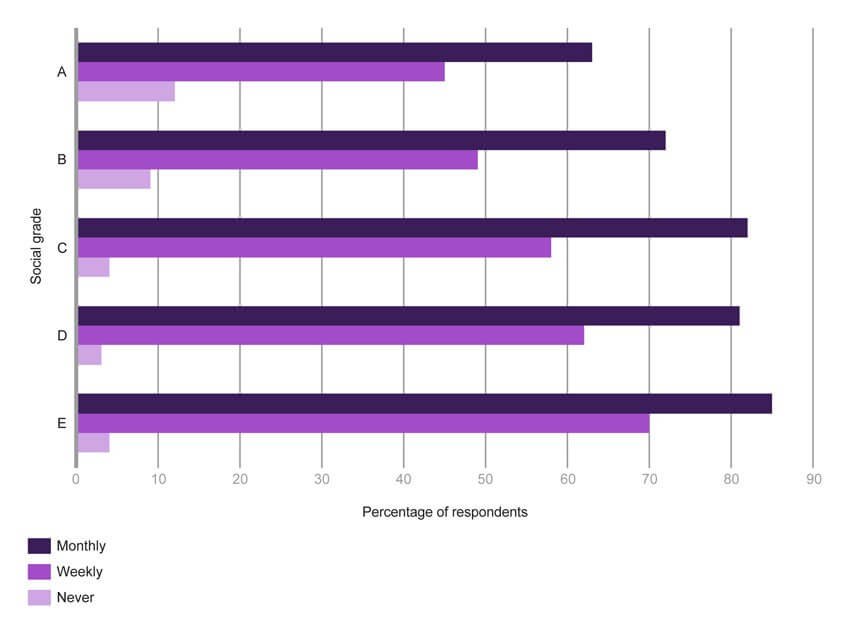 Source: Department for Environment, Food and Rural Affairs (2011) Survey of public attitudes and behaviours towards the environment