Despite a five-year funding settlement, the NHS was struggling to meet all the challenges it was facing even before the Covid-19 pandemic – this settlement will need to be revisited to meet these challenges and deal with the legacy of the pandemic.

In June 2018, the Prime Minister announced a five-year funding settlement: a 3.4 per cent average real-terms increase in NHS England’s budget between 2019/20 and 2023/24. This is generous compared to the 1.4 per cent increases over much of the past decade but less than the long-term average of 3.7 per cent and not enough to respond to all the challenges facing the NHS before the Covid-19 pandemic. These challenges include the need to restore provider finances, improve performance against waiting time targets and kick-start the process of reform. It also excludes important areas of health and care spending, such as investment in buildings and equipment, training for clinical staff and local authority budgets for public health and adult social care. To fulfil the ambitions of The NHS Long-Term Plan, a more coherent and consistent approach to NHS funding is needed.

The NHS now faces a very different task to the one envisaged when the five-year funding deal was agreed. Responding to the Covid-19 pandemic, including tackling the rising backlog for NHS treatment, will require substantial additional investment in future years. Additional, multi-year, funding will also be required to deliver the government’s commitments to increase the number of staff, deliver more primary care appointments and build more NHS hospitals.

Polling from the British Social Attitudes Survey suggests that 80 per cent of the public think that the NHS is facing a major or severe funding problem, 54 per cent say they would be willing to pay more in tax to fund the NHS. This poll was conducted before Covid-19 but shows that concerns over NHS funding remained high even in the first year of the five-year NHS funding settlement .

The government faces difficult decisions as a result of the uncertain economic context due to Covid-19 and the United Kingdom leaving the European Union. Ultimately, funding levels for public services are a political choice.

In making these choices, politicians should be honest about the shortcomings in the availability and quality of care that will arise if services do not receive the resources they need.

Most funding for publicly funded health services in England comes from central taxation, with overall NHS budgets set by national government. This model is fundamentally sound, being both efficient and equitable, and is strongly supported by the public. However, for decades, NHS funding has faced repeated cycles of ‘boom and bust’, with periods of chronic under-investment followed by intervals of rapid growth. 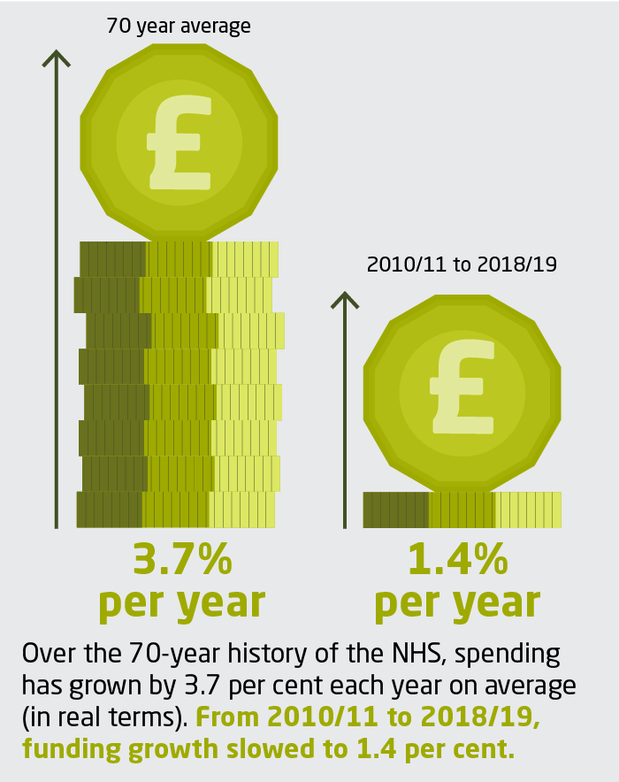 In the decade following the global financial crisis, the health service faced the most prolonged spending squeeze in its history, as increases in funding failed to keep pace with demand for services due to a growing population, people living longer, often with multiple long-term conditions, and advances in technology and treatment. This led to trade-offs between different areas of health expenditure; spending on buildings, equipment, investing in training more staff and prevention was deprioritised in order to pay for the day-to-day running of services. This was a false economy that stored up problems for the future.

As a result, many NHS providers and commissioners ran significant deficits in their budgets for a number of years; key waiting times standards were missed all year round; and evidence emerged that access to some services was being limited and that the quality of some care had been diminished. These challenges did not go unnoticed by the public – even before the pandemic, survey data suggested that a majority of the public thought the NHS faced a major or severe funding problem.

The NHS has a large and growing  maintenance backlog. The cost of repairs is valued at £9.0 billion, of which £4.7 billion is judged to be 'high risk'.

In response to these ongoing pressures, in July 2018 the government announced a new five-year funding deal for some areas of health spending, covering the period from 2019/20 to 2023/24. Under this deal, spending for services covered by the NHS mandate was set to rise by an average of 3.4 per cent each year in real terms.

There have been several iterative increases to health spending since the five-year NHS funding deal was announced. The Spring Budget in March 2020 provided an additional boost to NHS funding over this parliament, to support the new government’s manifesto commitments on more staff, more primary care appointments and free hospital car parking for some groups.

Similarly, a number of announcements on capital investment designed to help meet the government’s pledge to invest in new or refurbished hospitals have been made.

In response to the Covid-19 pandemic, the government has to date allocated more than £50 billion of extra funding for health services in 2020/21, including funding for personal protective equipment for staff, developing of the Test, Track, Contain and Enable programme, and extended use of the independent sector to increase capacity. Despite these funding boosts, waiting lists for care are continuing to grow and the NHS is building up a substantial backlog of care.

The Chancellor used the Budget to give the NHS and public services funding to deal with the effects of coronavirus. Siva Anandaciva looks at this and other measures affecting health and social care.
Active project

Our quarterly monitoring reports provide a regular update on how the NHS in England is performing. We examine the views of finance directors on the productivity challenge they face, as well as key NHS performance data.
Active project

The King's Fund position: what do we think about key health and care issues?

Do you want to know what The King’s Fund thinks about the big issues in health and care? Here we set out our views on a range of topics, based on our research and policy analysis as well as the work we do with individuals and organisations in the health and care system. Now including our position on mental health, public health and integrated care.

Financial debts and loans in the NHS

In April 2020, the government announced it would write off more than £13 billion of historical NHS debt. This explainer brings together information on why this debt built up, how the write-off will work, and why this issue is important.