The White Paper, Equity and excellence: liberating the NHS, sets out a significant set of reforms for the NHS over the coming years. As we do with all new major policy developments, The King's Fund will follow the evolution and implementation of these changes and assess their impact. As part of this evaluation we will collate and comment on key aspects of NHS performance, starting with hospital waiting times.

Please note: This page is no longer being updated as data is now being collated and analysed as part of the Quarterly monitoring report

In his speech on 7 June setting out his five pledges for the NHS, David Cameron noted the importance of waiting times to patients and the public. He promised that published information on waiting times would, amongst other things, help patients choose which hospital to attend. But while choice may help keep waiting times low – why would any patient choose hospitals with long waits? – in practice there's no guarantee.

And so, David Cameron also said:

'But we're not going to leave anything to chance, especially as our changes are working their way through the system. So we're keeping the 18-week limit. That's in the NHS Contract and Constitution. And it's staying.'

A belt and braces approach to waiting times is called for it seems. So what's happening to our tracker this month?

The latest 18-week referral to treatment waiting times data for April 2011 are shown in the figures below.

Latest median waiting times (the time waited by the person halfway between the shortest and longest wait) for the referral to treatment pathway show some mixed changes on March figures and in terms of what might be expected given past seasonal trends for April.

For people still on a waiting list, the median wait has increased compared with March, but this is more or less in line with previous seasonal trends. 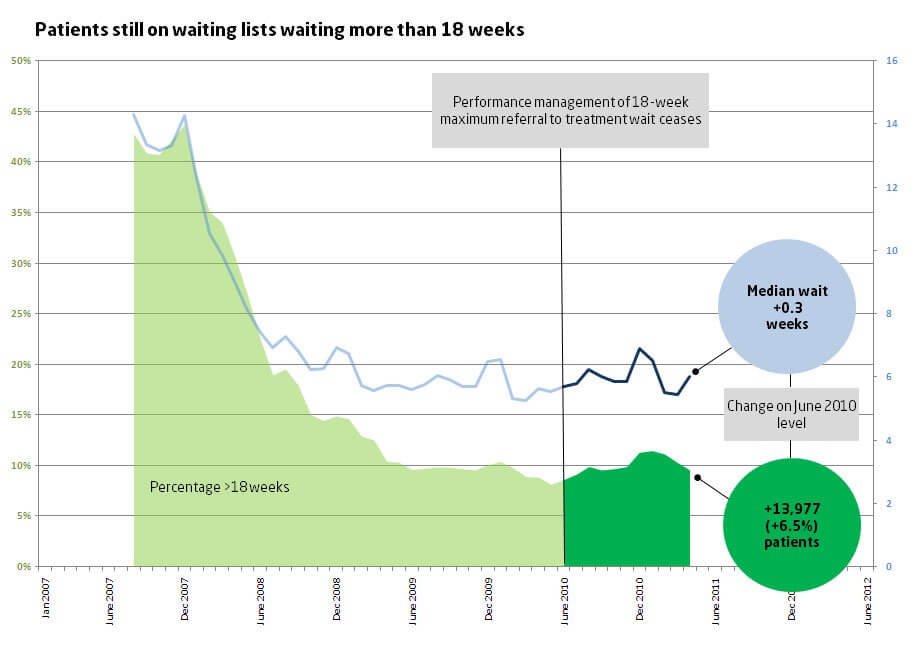 Patients treated in outpatients who waited more than 18 weeks

For those who attended outpatients, median waits increased very slightly, but much less than might be expected in terms of the trends for April in previous years. 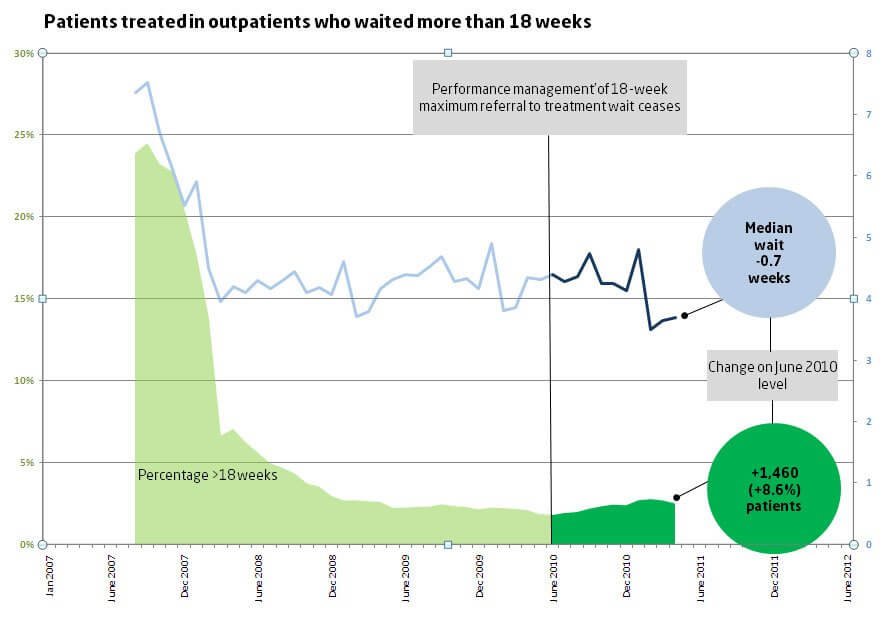 Patients admitted as inpatients who waited more than 18 weeks

Median waits for people admitted as inpatients showed a small fall – as might be expected for April. 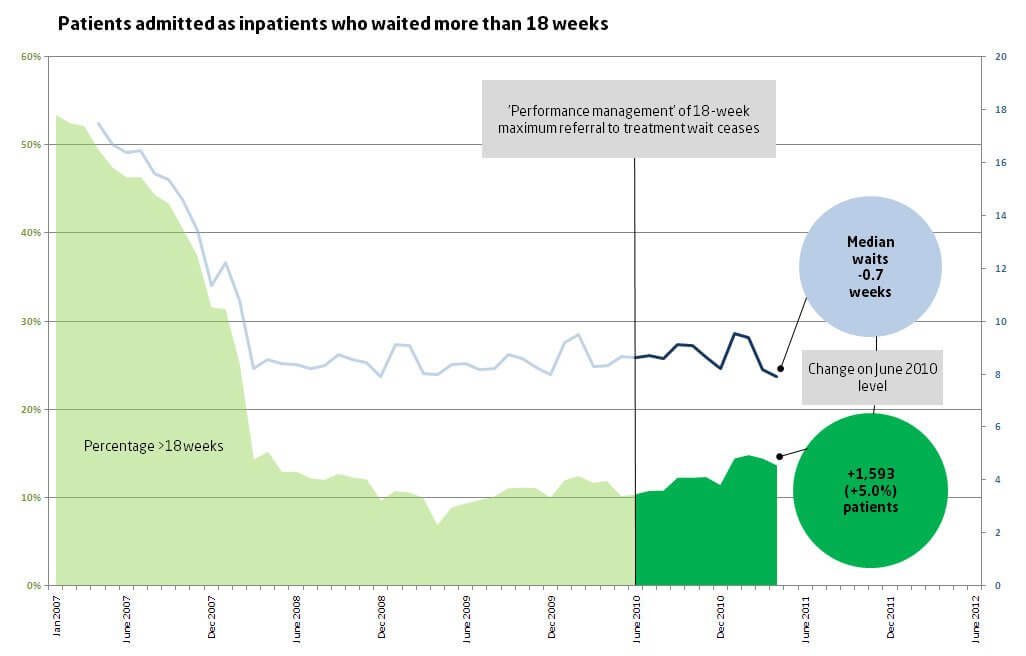 All sources: adapted from: Department of Health: Referral to treatment waiting times statistics

Patients waiting longer than 6 weeks for a diagnostic test

However, median waiting times for diagnostic services increased in April compared with March – from 1.8 to 2.3 weeks – an unexpected increase (in the past three years median waits have reduced in April). It is also the highest April waiting time since April 2007. 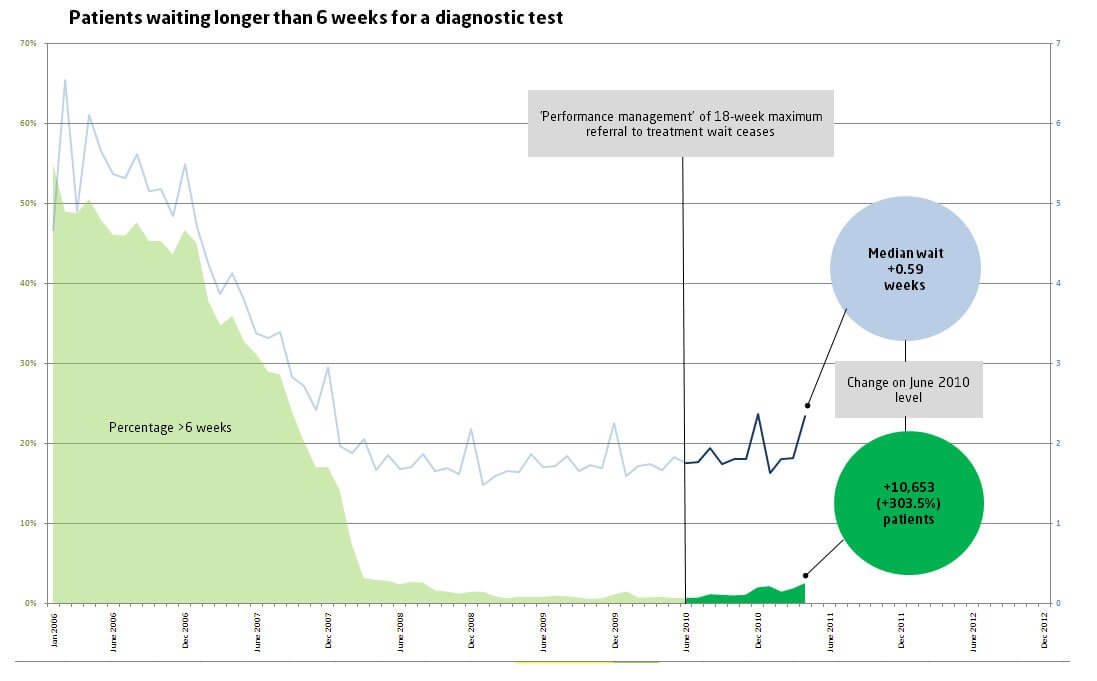 So are waiting times improving?

The proportion of people who waited more than 18 weeks as outpatients, inpatients or those still on waiting lists all fell compared with March. The 18-week waiting statistics have much less of a noticeable seasonal pattern than median waiting times so it is difficult to compare these changes with what might have been expected for this time of year.

Unfortunately for the Prime Minister, as the graph below shows, while just under eight out of ten hospitals met this limit, 49 (26 per cent of) NHS hospitals breached this target for some patients in April.

(Note: the previous government's 18-week target was set at 90 per cent of admitted patients to allow for variations in clinical need and patient choice in the timing of an admission). 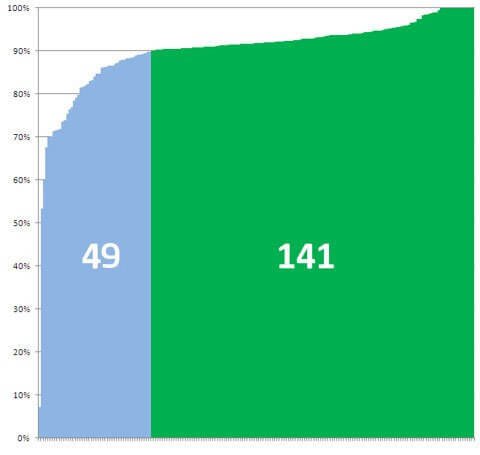 We will be collating and commenting on key aspects of NHS performance, including hospital waiting times. This page shows the results for March 2011.

We will be collating and commenting on key aspects of NHS performance, including hospital waiting times. This page shows the results for February 2011.

We will be collating and commenting on key aspects of NHS performance, including hospital waiting times. This page shows the results for January 2011.

We will be collating and commenting on key aspects of NHS performance, including hospital waiting times. This page shows the results for December 2010.

We will be collating and commenting on key aspects of NHS performance, including hospital waiting times. This page shows the results for November 2010.

The White Paper sets out a significant set of reforms for the NHS over the coming years. The King's Fund will follow the evolution and implementation of these changes, including collating and commenting on key aspects of NHS performance, starting with hospital waiting times. This page shows results for October 2010.

NHS waiting times were once again the subject of heated exchanges in the Commons. But as our waiting times tracker shows, it all depends on how you measure it.
Blog

The health White Paper sets out a significant set of reforms for the NHS. We plan to follow the evolution and implementation of these changes and assess their impact.

How is the NHS performing? April 2011: Quarterly monitoring report

This monitoring report is the first of a regular quarterly review, which will combine publicly available data on selected NHS performance measures with views from a panel of finance directors on the key issues their organisations are facing.

The NHS under the coalition government: Part two: NHS performance

This report looks at how well the NHS has performed under the coalition government. Using routinely available data, the report creates a conventional 'production path' – describing the financial inputs to the NHS before detailing its outputs, such as hospital admissions and A&E attendances.
Blog

Do we need national outcomes strategies?

The variability in the quality of neurological services is clear. Catherine Foot asks if national strategies solve the problem.
Blog

Commonwealth Fund survey: if the NHS is doing well, why is it changing?

As a new Commonwealth Fund survey reflects a positive light on the NHS, Chris Ham asks why we are still moving forward so quickly with health reforms?
Press release

The Chief Executive of The King's Fund, Chris Ham, responds to the government's announcement on the NHS Future Forum's report.