Extending choice for patients over where and how they want to be treated has been a priority for the Labour government. Its 2005 manifesto included a number of specific pledges in relation to hospital treatment, primary care, maternity care and palliative care services.

'By the end of 2008, patients whose GPs refer them for an operation will be able to choose from any hospital that can provide that operation to NHS medical and financial standards.'

Since 2006, patients needing a non-urgent hospital referral by their GP should have been offered a choice of four hospitals. In April 2008 this choice was extended to include any NHS or private hospital meeting NHS standards. The government's main measure of performance against this target has been a survey of patients using hospital outpatient departments, asking whether they remember being offered a choice of hospital.

The results of this survey suggest that the implementation of the policy is still incomplete (figure 1 below). The proportion of patients who recalled being offered a choice of hospital increased from 30 per cent in May/June 2006, when data was first collected, to 45 per cent in January 2007 but has stayed fairly constant since then – although the number of patients who were aware they had a choice has slowly increased. These findings are supported by research carried out by The King's Fund, which found that 49 per cent of patients who booked their first outpatient appointment in January 2009 were offered a choice of hospital. 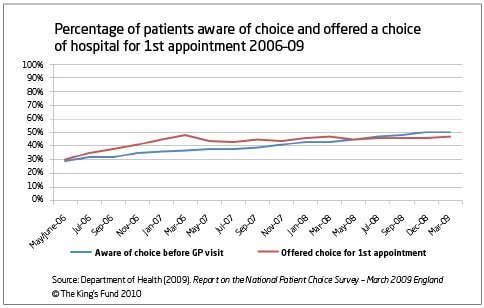 'We will expand capacity and choice in primary care too. Where GPs' lists are full we will expand provision by encouraging entrepreneurial GPs and other providers to expand into that location.'

In 2007 the government made a commitment to establish 100 new GP practices in the areas of the country with the poorest provision and to provide resources for primary care trusts (PCTs) to develop 152 GP-led health centres, offering a range of services from 8am to 8pm seven days a week. In 2009, the government announced that 65 new GP practices had opened and 50 GP-led health centres were in operation (see High Quality Care for All: Our journey so far).

In a speech at The King's Fund in September 2009, Andy Burnham announced that 'within the next 12 months' the government would abolish practice boundaries to allow patients to register with the GP of their choice.

'By 2009 all women will have choice over where and how they have their baby and what pain relief to use.'

In 2007, the government introduced a new national guarantee of choice for women, including choice of where they gave birth – at home, at a midwife-led unit or at a consultant-led unit – and where they received their antenatal and postnatal care. The Department of Health has not published any monitoring of performance against this target.

In 2008, the Healthcare Commission's review of maternity services in England suggested that choices in maternity services were not yet comprehensive. They found that 81 per cent of women had been given a choice of where to have their baby, and for 58 per cent this had included the option of a home birth. However, the report also found that only around a third of trusts had a range of both consultant- and midwife-led units and concluded that 'in practice, the choice of types of maternity unit is currently very limited'. It also found that 64 per cent of women 'definitely' received the pain relief they wanted and that 28 per cent had had the pain relief they wanted 'to some extent'.

'In order to increase choices for patients with cancer we will double the investment going into palliative care services, giving more people the choice to be treated at home.'

In its End of Life Care strategy, the Department of Health acknowledged that it is 'difficult, if not impossible' to calculate the cost of palliative care (now often referred to as end-of-life care), in part because there is no definition of when end-of-life care starts. So the government decided to interpret this manifesto commitment to mean increasing the funding for specialist palliative care services by £198 million (to reach a total of £378 million) for the three-year period 2009 to 2011, compared to a total spend of £180 million between 2000 and 2004.

It is not known what impact this investment has had on the provision of palliative care services at home. In 2008 the National Audit Office's review of End of Life services included a survey of home care services provided by 138 PCTs in 2006-07, which suggested that home-based services are still limited in their coverage (see table 1).

The government is considering creating a legal entitlement to die at home as part of the NHS constitution, but the feasibility of this right will not be explored until 2013.

The NHS employs 1.4 million staff and has a budget of around £100 billion, so it needs to be managed professionally. We set out the key facts about managers in the NHS.

Has Labour met its spending commitment for the NHS? We analyse the figures to find out.

There are endemic failures in the adult social care market. In this joint blog with colleagues from the Health Foundation, we explain why reform is needed and identify a set of questions we think need to be explored.
Long read

A modest proposal? Choice and competition in the long-term plan

Can the principle of choice and competition work alongside integrated care and the demands of patients with multi-morbidity? Nicholas Timmins unpacks NHS England’s plans to make integrated care work more effectively and what this might mean in terms of changes to legislation.