More than 60 per cent of NHS trust finance directors think controls on agency spending announced in June will not significantly reduce the amount spent on agency staff, according to the latest quarterly monitoring report from The King’s Fund. Only one in ten trusts surveyed thought the controls, which set a maximum hourly rate and cap the amount trusts can spend on agency staff, will have much impact.

The regular survey carried out for the report also found that three-quarters of trusts intend to recruit more permanent nurses in the next six months, suggesting that the NHS is continuing to prioritise quality of patient care despite rising financial pressures. With the majority of trusts forecasting deficits and no prospect of extra funding, it is clear that the NHS is heading for a financial crunch by the end of the year.

Key findings from this quarter’s survey include the following.

The report also reveals that fewer than half (46 per cent) of mental health trusts are confident that commissioners will increase their funding in line with government commitments. This concern is not shared by commissioners, more than 80 per cent of whom are confident of honouring these increases.

Commenting on the report, John Appleby, Chief Economist at The King's Fund, said: ‘Rising costs, cuts in the payments they receive for treating patients and increasing demand makes 2015/16 the most challenging year for NHS providers this century, and the majority expect to be in deficit by the end of the year. Despite this, trusts remain focused on improving the quality of care and are planning to recruit more nurses.

‘There are considerable opportunities to make productivity improvements, but continuing to rely on top-down policy levers such as limiting staff pay increases and capping agency fees will not be sufficient. The most promising opportunities lie in changing clinical practice to deliver better outcomes at lower cost, something that can only be achieved by engaging NHS staff in a new mission to deliver better value.’

How is the NHS performing? is the sixteenth quarterly monitoring report by The King’s Fund. It covers the first quarter of 2015/16 (April to June) (although time lags in the publication of data mean that reporting on some performance indicators covers different periods).

The King's Fund is an independent charity working to improve health and health care in England. We help to shape policy and practice through research and analysis; develop individuals, teams and organisations; promote understanding of the health and social care system; and bring people together to learn, share knowledge and debate. Our vision is that the best possible care is available to all. 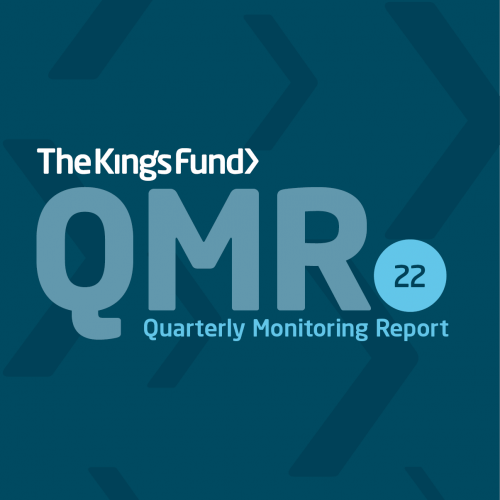 How is the NHS performing? May 2016: Quarterly Monitoring Report

The latest quarterly monitoring report from The King's Fund finds that nearly two-thirds of NHS trusts and more than half of clinical commissioning groups say the quality of patient care in their area has deteriorated over the past year.
Blog

With health policy announcements coming out almost daily both before and after the election, it’s time to take stock of where we are with NHS waiting times.

How is the NHS performing? December 2018 quarterly monitoring report

Although we have technically moved out of winter, the latest performance data paints a picture of continuing pressure on NHS staff and services. While A&E departments understandably received much of the focus over the winter months, a quieter decline continues in waiting times for planned (elective) care.