The King’s Fund is celebrated its 120th anniversary over the course of 2017. In the third in our series of blogs looking back at our history, Hong-Anh Nguyen explores the major fundraising campaign undertaken by the Fund during the 1920s to aid London’s hospitals with their post-war financial deficits.

In an era of flourishing philanthropy and in the absence of a universal health care system, voluntary hospitals provided up to 33 per cent of hospital beds in early 20th century England. Many voluntary hospitals were founded by groups of clinicians, consequently these hospitals prided themselves on being at the forefront of medical education and training, and patients often had access to new medical innovations.

However, in the aftermath of World War I, the voluntary hospitals of London found themselves entrenched in debt. The increased demand resulting from casualties returning from the battlefields meant that voluntary hospitals’ finances were stretched thin. In addition to this, the great medical advances made as a result of the war meant that new, more clinically effective and more expensive treatments were being adopted, which added further financial strain.

At this time, the Fund’s main focus was to raise money to support the voluntary hospitals of London. Pre-war, the Fund's grant distribution scheme had contributed towards general maintenance of voluntary hospitals, as well as funding a variety of improvement projects, such as providing nursing accommodation, kitchen equipment, and increasing capacity and services. However, these hospital improvement projects were deprioritised during the war. The Fund recognised that following the war, improvements were more urgently needed than ever. It was clear that additional fundraising efforts were required. 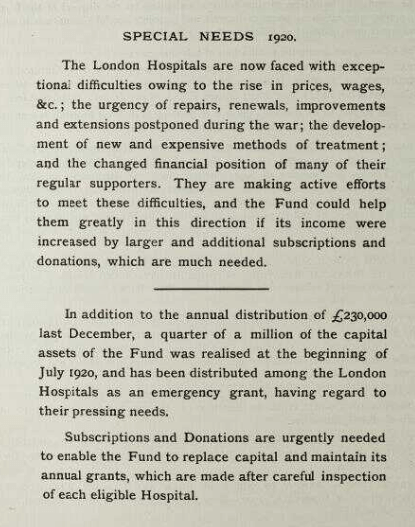 Recognising the mounting financial pressures on London’s hospitals, in 1920 the Fund made the extraordinary decision to distribute £250,000 from its reserve funds (p 28) – at that time, a quarter of these funds – to the hospitals. The hope was that this emergency distribution would bolster hospital finances until a long-term sustainable solution could be found. But by 1921 the hospital financial crisis had deepened even further, and the government stepped in to distribute a further £500,000 to London’s voluntary hospitals, on the condition that they raised ‘an equal amount of fresh money from other sources’ (p 11).

To support the hospitals in raising this money, the Fund launched the broadest fundraising campaign it had ever undertaken. Previously, the majority of the Fund's donations had come from ‘subscriptions’ – annual rolling donations from wealthy individuals, companies or guilds. The Royal Family were subscribers, with King Edward VII donating £1,000 annually. Recognising that this alone was not enough, the combined appeal adopted a model of fundraising that paved the way for charity trends that we see today.

The combined appeal ‘was to be addressed to all classes of the community’ (p 48), so the fundraising efforts ranged from personal appeals to influential individuals (the Spanish Ambassador wrote to all the foreign embassies in London asking for donations) to sales of eggs and pheasants (£3 a brace, guaranteed to have been shot by the King himself). Smaller donations of threepence were rewarded with a token and an acknowledgement from the Honorary Treasurer, Lord Revelstoke. 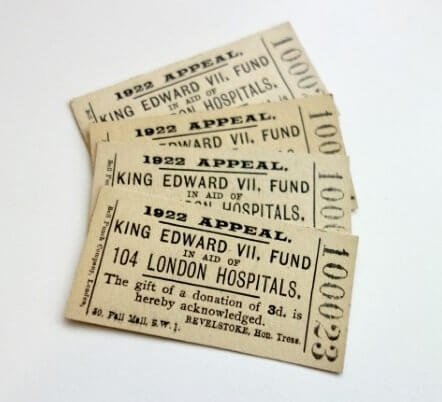 The Fund undertook great efforts to advertise the combined appeal through a publicity drive that included advertising on public transport, sky-writing over London (‘Give to-day’) and a poster competition, which offered a prize of 100 guineas for the best poster on the theme of ‘Save your hospitals’. The competition received more than 300 entries and the posters were displayed along the railings of London’s parks, bridges and railway stations.

The poster campaign aimed to encourage the public to feel a sense of pride in the voluntary hospital system and to incentivise those who didn’t already donate to their local hospital. In the same vein, the Fund produced commemorative stamps for schoolchildren to sell, each one featuring a crest of a London hospital. An astonishing three million stamps were sold, contributing £15,000 towards the appeal.

The appeal also raised funds through entertainment. The Fund brought together a Sports and Fetes Branch, an Educational Auxiliary Committee, and a Theatrical, Music Hall and Cinema Committee to co-ordinate a programme of events designed to appeal to a wide audience. The list of events (p 50) was eclectic: a display of physical exercises at the Royal Albert Hall; a bake sale at Devonshire House; an inter-school cricket match at Lord’s; bridge and whist drives; a display of produce by allotment holders; and a gala performance of the highlights of the West End shows of the time. 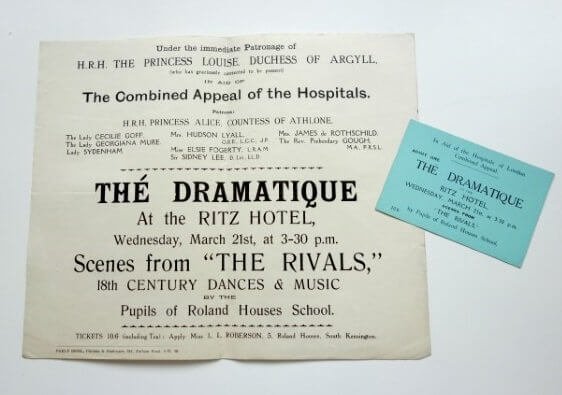 The Fund even went so far as to produce a film, When George was King, which demonstrated the scientific advances of the past 100 years. Money raised from ticket sales went towards the appeal.

All in all, the appeal raised £416,000 (p 55) – almost £22 million in today’s terms – but despite this, the Fund calculated that a funding gap of £174,000 remained. It was clear that the Fund needed to continue the efforts of the appeal to bridge this funding gap. In 1923, the Fund established the Propaganda Committee to continue promoting the work of the Fund and of the voluntary hospitals of London. The next blog in this series will explore the work of the Propaganda Committee.