Our latest QMR survey of NHS trust finance directors reveals deepening pessimism about local finances and concern about the outturn for the current financial year. New NHS inflation figures from NHS Improvement reveal the true extent of the financial pressures facing the NHS this year and up to 2020/21.

How much money the NHS has been allocated over the next few years is a somewhat contested fact. It shouldn’t be of course; how much the government has decided to spend on health care should be – in one sense at least – an uncontroversial figure. But since the Spending Review last November, the increase in NHS funding by 2020/21 has variously been announced as ‘an additional £10 billion’, ‘a further £8 billion’ and, for 2016/17, ‘the sixth biggest increase in its history’.

We arrive at a very different assessment for 2016/17, as Adam Roberts of the Health Foundation and I illustrated in our analysis of how this year’s NHS budget compares historically. But the first two figures are correct – albeit in their own narrowly defined terms. They rely partly on stretching the boundaries of the Spending Review (the £10 billion includes a £2 billion increase in 2015/16 decided before the Spending Review was published, for example). They also count increases just for NHS England rather than for the whole of the NHS, and – unusually – use 2020/21 as the base year for calculating real funding changes.

The measure of inflation used to calculate the real changes in funding for all these figures is the GDP deflator. This is not controversial, and is the way public spending figures are deflated to provide real figures across government on a like-for-like basis.

But the GDP deflator is an average measure of inflation across the whole economy; the actual inflation experienced by the NHS will be different given its particular inputs – doctors, managers, needles, drugs etc. Importantly, it is the NHS-specific measure of inflation that really counts when it comes to assessing the actual financial resources available to the NHS. And usefully, forward estimates of changes in unit costs for the NHS are produced by NHS Improvement.

NHS Improvement’s latest economic assumptions suggest that NHS-specific inflation will be 3.1 per cent this year – double the Treasury’s current estimate of 1.5 per cent for the GDP deflator. This NHS-specific rate of inflation is enough to perfectly wipe out this year’s cash increase of £3.6 billion, as all of this is likely to be absorbed by higher staff pay, pay drift and increases in the unit costs of drugs, capital and other operating costs.

As the chart shows, on the basis of NHS Improvement’s new inflation forecasts, the overall real increase for the NHS by 2020/21 will be just £1.5 billion and an increase averaging around 0.2 per cent per year. 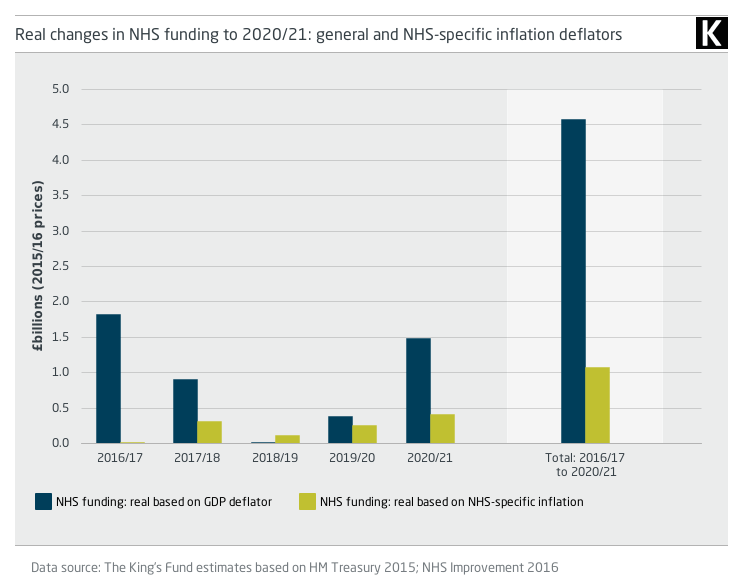 If NHS Improvement’s inflation estimates turn out to be correct (and they will be subject to revision), it is not hard to discern a key reason for finance directors’ views that this year is going to be exceptionally difficult. Despite an upfront financial rescue package of £1.8 billion, our latest survey suggests that just over half of all NHS trust financial directors forecast a deficit this year – including 69 per cent of acute trusts.

Looking forward, NHS inflation-adjusted funding in 2017/18 amounts to an increase of only £313 million – equivalent to less than one day’s running costs for the NHS. Perhaps not surprising then that nearly two-thirds of trust financial directors say they are ‘fairly or very concerned’ about balancing their books in the next financial year.

How changes in clinical practice can deliver better value: Learning from best practice approaches in the NHS

Quality of care under threat as NHS enters watershed year

Nearly two-thirds of NHS trust finance directors and more than half of clinical commissioning groups (CCG) finance leads(1) say the quality of patient care in their area has deteriorated over the past year, according to the latest Quarterly Monitoring Report from The King’s Fund.
Blog

How does this year's NHS budget compare historically?

Analysis from The King's Fund and the Health Foundation looks at how this year's NHS funding increase compares with previous years. John Appleby and Adam Roberts find that this year's increase is the 28th largest since 1975/6.
Report

Public satisfaction with the NHS in 2015

The relatively high levels of satisfaction in part reflect positive views on on NHS services, but also public support for the concept of a publicly run health service free at the point of use and providing a comprehensive range of services.

Waiting times in accident and emergency (A&E) departments are a key measure of how the NHS is performing. In recent years, patients have been waiting longer in A&E; here we look at why that is.

Whilst I appreciate an analysis that makes clear that funding for the NHS is based on a faulty model that shows the government is relying on predicted general inflation figures rather than NHS specific predicted inflation I would like information that provides a further breakdown to try and explain if the government are giving parity of esteem to mental health services.
I am very worried about our NHS & we need to pull together to save it ?
In 2012 how many elderly people were unnecessarily put on the Palliative Coded Pathway at Scarborough Hospital North Yorkshire. Secreted away from family? Is the Government going to do anything about this cruel killing of our elderly. How can this hospital not be accountable to family when they have found out so many issues of neglect and not to be told why.