Our quarterly monitoring report (QMR) provides a thorough review of NHS performance figures along with insight from an accompanying survey of trust finance directors and clinical commissioning group finance leads. Over the past couple of years I’ve often wondered when and if our QMR survey respondents would become more optimistic in their outlook. Not yet, would seem to be the answer.

The charts we compile as part of the QMR tell some of the story. Take, for example, the NHS financial directors’ end-of-year financial forecast over the past six years (see Figure). There is certainly not much sign of an optimistic outlook there – in fact it’s striking quite how substantial the decline is. 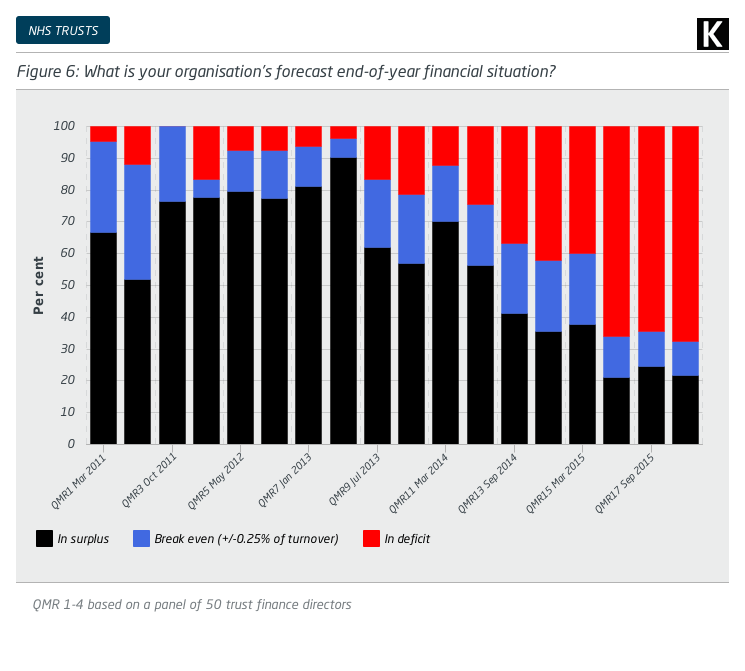 But as part of our QMR surveys, respondents also share with us a wealth of information about the real-life detail behind the numbers – it feels a shame not to share them.

Our latest survey of trust finance directors – carried out after the Spending Review announcement and planning guidance was published – shows that 67 per cent expect to overspend by the end of this year – including 89 per cent of acute trusts. Despite the aim of the planning guidance to contain overspending to £1.8 billion, we estimate an overall deficit of around £2.3 billion by March this year after various in-year loans and other financial support.

Our respondents spell out what this really means for their organisations – overwhelming pressure would probably sum it up. One trust finance director described how the organisation’s deficit meant that it would need a ‘£37 million cash loan in February to be able to pay staff and suppliers in the last two months of the year.’ Another finance director explained how the trust had revised its original planned deficit of £5 million due to ‘very significant operational service pressures and huge increases in demand for beds since August 2015’.

Some organisations are managing to keep their heads above the water, but often this is down to one-off land sales and other measures that are simply non-recurrent stop gaps; as one respondent said, ‘we will break even only if a property sale of approximately £6.5 million goes through, and it’s considerably delayed already’.

Several viewed the future in bleak terms. One trust in deficit reported that for them, it is ‘getting worse each month’. If this year is going to be tough for providers, next year for some looks even worse. ‘Frankly, it would be easier to pass a camel through the eye of a needle than for my trust to break even in five years! Everyone talks about savings, but that can only come about by spending less money on people, premises and procurement. What regulators and politicians forget is that demand is rising,’ lamented one respondent.

So what are regulators and politicians doing about it? Looking beyond this financial year, the Spending Review has now provided a settlement for the NHS to 2020/21. Measures as part of planning guidance controls are aimed at containing this year’s deficit. These increasingly apply to the operational matters of providers. The central bodies have made it clear that finance and quality cannot trump one another, but within the current context, how providers will meet these controls – particularly the agency ‘ceiling’ on qualified nursing spend – remains to be seen.

‘We haven't managed to stay within our 6 per cent [agency spend] target. Quite why they introduced this at the onset of winter is beyond me. Post-Francis, Keogh, Berwick et al, targets like this are meaningless. It doesn't drive behaviour,’ was the response from one acute trust. Another noted the difficulties of finding permanent specialist medical and nursing staff in London: ‘It remains to be seen how effective are the new proposals to curb agency spend without compromising patient safety while meeting more demanding overall staffing levels’.

While there is no doubt that the health system is under pressure, there were also signs of optimism. One respondent told us about their experience with developing place-based systems of care and the positive effect this has had on quality of care, attributing this to 'some genuine joint working among commissioners that is feeding through to providers, so that we can contribute to genuine joint win-win situations'. With the introduction of sustainability and transformation plans and the development of 'transformation footprints' perhaps more of this optimism will be evident in future surveys.

What the planning guidance means for the NHS: 2016/17 and beyond

Our briefing considers some of the key publications and policy announcements that have come out in the wake of the 2015 Spending Review and offers a commentary on what they might mean for the future policy landscape.
Blog

Planning for 2016/17 and beyond: from survival to sustainability

With the publication today of our briefing on the impact of the NHS planning guidance, Phoebe Dunn discusses the key findings and what this could mean for the future of the NHS.
Press release

NHS trusts are forecasting an end-of-year net deficit of around £2.3 billion.

This is fascinating and valuable work. One qualitative data point that particularly intrigues me is this (from an interview with an FD quoted above): "What regulators and politicians forget is that demand is rising".

We are told that the NHS in England is now a market, underpinned by economic regulation, and that money follows the patient. What kind of market is this in which higher demand is seen by providers as a source of financial problems? And what kind of incentive regime now exists in the acute care sector? It would appear to be very different to that envisaged in the health and social care act.
In order to run a healthy economy,mm we need a healthy work force.

To this end the public need to be apprised as to what they have to do ,to achieve this. Similarly businesses, local and national government need to be aware of the damage they do to the population by not heeding scientists warnings on air , light, water and land pollution which contributes vastly to our and to wild life's ill health, not only in this country, but world wide.

We all love our NHS and want to see it thrive. I know people are living longer with chronic conditions but no explanation is being given for the deficit. Clearly demand exceeds resources and if resources are finite we need to look as a nation at what the NHS can and should provide free at the point of use. This would involve a reality check for many people who seem to think it is the panacea for all of society's problems and tend to take it for granted, complain about the service or simply expect too much. Perhaps it is time for a real debate /referendum on what the priorities are for our NHS and what the public expectations are because clearly we cannot go on as we are. We all have a vested interest in the continuation of the NHS and this may mean making sacrifices all round. People in this country are so lucky to have the NHS. Not all nations are so fortunate.

Despite Covid-19 dominating the year, there were plenty of other health and care policy headlines in 2021. Siva Anandaciva takes a look back at the key moments of the past year.
Long read

Siva Anandaciva outlines why a health and care levy might not be enough to address the workforce challenges and growing waiting lists the NHS and social care are currently facing.