In 2000, current spending1 on health care in the United Kingdom was 6.3 per cent of GDP, and the then Prime Minister Tony Blair committed his government to matching the average for health spending as a percentage of GDP in the 14 other countries of the European Union in 2000 (8.5 per cent) through increases in NHS spending.

Over the next few years spending on the NHS increased substantially, pushing total (public plus private) spending to 8.8 per cent of GDP by 2009. By then, however, the EU-14 spend (weighted for size of GDP and health spend, and minus the UK) had moved on to 10.1 per cent of GDP. Still, the gap between the UK and its European neighbours was closing.

The growing gap between us and our European neighbours should give pause for thought. Tony Blair’s commitment was partly an appeal to ‘keeping up with the Schmidts and Lefebvres’. But it also emphasised that spending more on health care was affordable: if the Danes, Swedes, French and Germans can spend more on health care without apparently bankrupting the rest of their economy, why can’t we?

Comparing spending on health care between countries is not straightforward. We have to consider how to deal with differences in the source of funding: public or private (which will include out-of-pocket spending as well as insurance payments, often compulsory in countries with social insurance systems). Given differences in the way countries fund their health care it is usual to compare total spending (public plus private) expressed as a proportion of countries’ GDP.

On this basis, data from the OECD shows that in 2013 (the latest year for which figures have been published) the UK spent 8.5 per cent of its GDP on public and private health care. (This excludes capital spending equivalent to 0.3 per cent of GDP to make figures comparable with other countries’.) This placed the UK 13th out of the original 15 countries of the EU and 1.7 percentage points lower than the EU-14's level (ie, treating the whole of the EU-14 (ie, minus the UK) as one country with one GDP and one total spend on health care) of 10.1 per cent of total GDP3 . (Note: the difference of 1.7ppts is rounded). 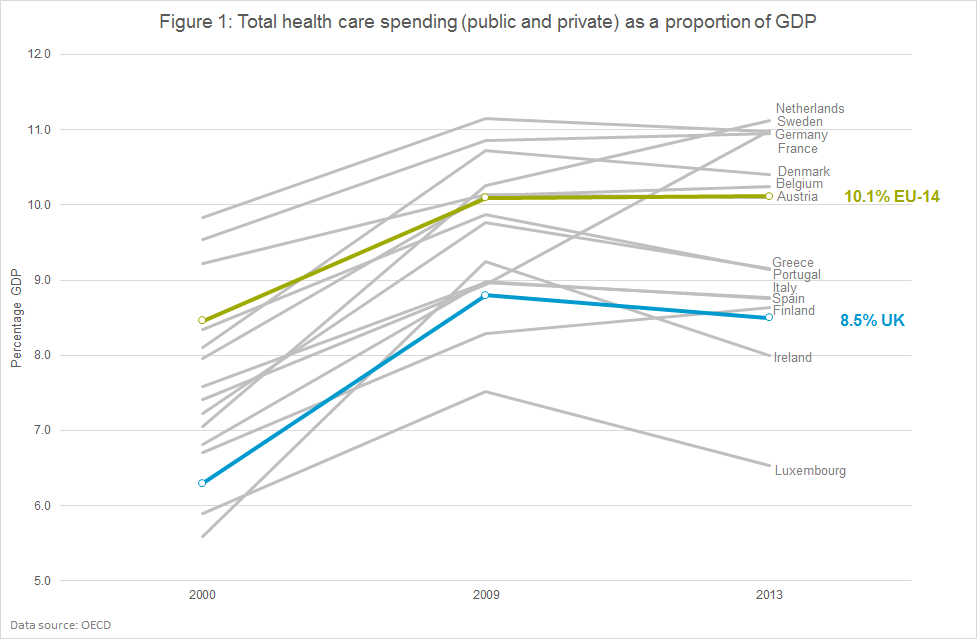 If we were to close this gap solely by increasing NHS spending (and assuming that health spending in other UK countries was in line with the 2015 Spending Review plans for England), by 2020/21 it would take an increase of 30 per cent – £43 billion – in real terms to match the EU-15 weighted average spend in 2013, taking total NHS spending to £185 billion (see Figure 2).

And of course we may find that by 2020/21 the EU average has moved on, leaving the UK lagging behind its neighbours once more. 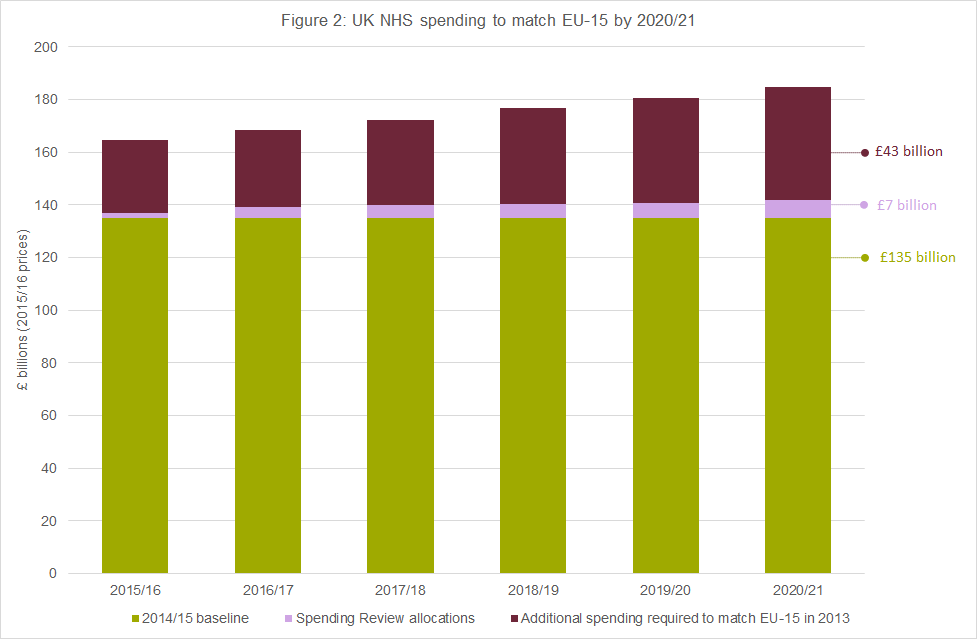 Compared to OECD countries there is also a gap. Omitting the United States (which heavily distorts the weighted average due to its relatively high health spend and its very high GDP), the OECD spend is 9.1 per cent4 . For the UK to match this would require total spending to reach £163 billion – an additional 15 per cent or £21 billion – by 2020/21 over current spending plans.

Whether funded publicly or privately, spending more on health will necessarily mean less on other things – either less private disposable income (if the additional money comes from additional taxation) or less on other publicly funded services such as education or defence – or indeed, paying down the UK’s debt and reducing its deficit. Or it means additional government borrowing (which will have to be paid for by increased tax or less spending on non-NHS services). Historically, increases in NHS spending have in the main been achieved by reduced spending on other public services (such as defence) rather than say borrowing or tax increases per se.

Whatever the flaws of international comparisons, it’s clear the UK is currently a relatively low spender on health care – as the Barker Commission pointed out – with a prospect of sinking further down the international league tables. The question is increasingly not so much whether it is sustainable to spend more – after all, many countries already manage that and have done for decades. Rather, it is whether it is sustainable for our spending to remain so comparatively low, given the improvements in the quality of care and outcomes we want and expect from our health services.

You're being a bit disingenuous with the phrase '"if we were to close this gap solely by increasing NHS spending". As you well know, nearly all of the OECD countries that spend more on healthcare as a % of GDP spend more on private healthcare than the UK as a % of GDP also. The implication would be that this deficit should in some part be made up by an expansion of the private healthcare system.
John once again i read your blog with interest
This country as always been able to afford a quality NHS ----why is it that in the last few years emphasis as been on TAX money in our pockets is the most inportant -------We as a so called caring NATION should be spending more on health we will all need health care sometime in our lives ---how can people compare having more tax money in there pockets to quality of care when needed ---
even those with a good income family, friends aunts,and uncles will at some time require A/E or social care
The Answer is INCREASING NI by a penny or two WILL stop tax dodgers and help rearrange the NHS without hurting everyone to much in there pocket

Have your figures taken account of the actual funding the NHS receives after efficiency savings have been deducted? Also, starving the NHS of funding plus the right wing media smear campaign suggests that government is working to discredit the NHS in order to persuade the public that privatisation is justified which suits the current political ideology of the majority Party.....
It's a shame to talk about how much to spend on health care without looking at the population and see how unhealthy they they are. The US spends billions on health care but their population is one of the least healthy on the planet. Why spend billions on NHS care if everyone is fit? Of course, they are not fit but fat, and the government is too weak to impose tax on sugar, fat and salt.
The NHS low spend is often held up as an indication of the efficiency of a monolithic state provider free at the point of use. Do we need to normalise the spend by life expectancy post cancer diagnosis, by diabetes HbA1c levels, or some other outcome measures ?

No other country has copied the NHS, despite having over 60 years to do so, which leaves me wondering if it is very efficient or underfunded or both or neither.
As always an interesting article and one that highlights the difficulty in comparing systems. At a macro level and taken in isolation this is a concern. Several questions remain for me. When we are comparing systems does this include or exclude social care provision, obviously for the UK this excludes social care but what about the other OECD countries? How efficient is the NHS – how do we compare when it comes to the demands and the services provided i.e. value for money? How do we compare with respect to clinical outcomes? Finally what do we need (and want) to achieve and how much will it cost – is the financial envelope sufficient to deliver this?
A good article apart from your conclusion. As an economist you will, of course, understand that as the sole issuer of its own currency the UK Government has no financial constraints and as such the level of funding of healthcare is entirely a political decision.
With regards to our health spending - does the cost of services (eg the amount paid to the hospital for an operation plus recovery time, radiology, etc by the CCGs) differ widely from other comparable countries? Does this impact our 'total spend' and does it require accounting for in these comparisons?
Of course it's affordable. We just have a very right wing government who try to convince us all its not affordable allegedly because of austerity but in fact because of their anti-social-care ideology

What's the NHS annual budget? How many doctors and nurses are there? What's the cost of an operation? We answer some of the most frequently asked questions we receive about health and social care.
Blog

Despite Covid-19 dominating the year, there were plenty of other health and care policy headlines in 2021. Siva Anandaciva takes a look back at the key moments of the past year.
Blog

The NHS is facing the challenges of growing waiting lists, missed performance targets and a severe workforce shortage. How will public attitudes towards the health service change if the taxpayer-funded increase in health spending doesn’t result in improvements?
Blog