Do the public still trust doctors and nurses to deliver high-quality care and put patients’ interests first, or could high-profile failings in hospital care, such as those at Mid Staffordshire NHS Foundation Trust, and the outcomes of Care Quality Commission inspections have contributed to a change in public opinion?

To answer this question, we have examined previously unpublished results from the British Social Attitudes (BSA) survey. In the 2014 survey and in 2002, respondents were asked to rate how much they trusted NHS doctors, nurses and hospital managers to put the interests of their patients above the convenience of the hospital.

The results (see Figure 1) showed that overall, nurses were the most trusted group closely followed by doctors, with hospital managers trailing behind. 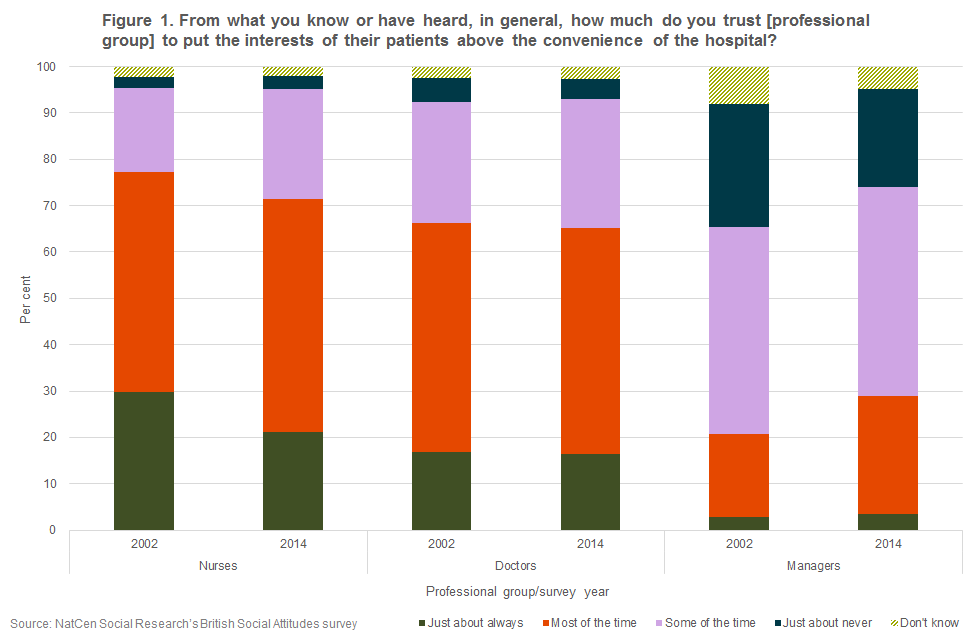 However, a closer look reveals a reduction in some levels of trust: the proportion of respondents reporting that they trusted nurses ‘just about always’ dropped from 30 per cent in 2002 to 21 per cent in 2014. Statistical testing suggests this is a true reduction, and not due to chance variation in the survey.

It is important to note that the available data does not give a picture of any fluctuation in levels of trust between 2002 and 2014 and that there are many factors that may have affected trust in nurses. That said, if this is a sustained drop in trust, it may be the case that public scandals involving nurses could be a potential contributing factor, for example, the public outcry and extensive media coverage surrounding the quality of care at Mid Staffordshire NHS Foundation Trust and the subsequent findings of the Francis Inquiry, which began in 2010 and published its final report in February 2013.

By contrast, public trust in doctors remained broadly unchanged and encouragingly, trust in NHS hospital managers improved. The proportion of respondents reporting that they trusted managers ‘just about always’ or ‘most of the time’ increased from 21 per cent in 2002 to 29 per cent in 2014.

Who trusts doctors and nurses?

People who have had recent contact with NHS services (defined as personal contact with inpatient or outpatient services in the past 12 months) were more likely to trust NHS doctors and nurses ‘just about always’ than those who had not (20 per cent compared to 11 per cent for doctors, and 25 per cent compared to 13 per cent for nurses). Recent personal contact did not appear to affect trust in NHS hospital managers.

This difference may reflect genuine relationships of trust built between individuals and the doctors and nurses who care for them, but also perhaps a degree of gratitude for the care that individuals have received. The difference may also be partially driven by negative media reporting having a greater influence over the views of those with no recent personal contact.

Trust also appears to be related to age: older respondents were more likely to trust doctors and nurses ‘just about always’ than younger respondents (see Figure 2). This is perhaps partly because older groups were more likely to have had recent contact with health services, or it may reflect generational differences in attitudes and expectations regarding ‘professional’ status. 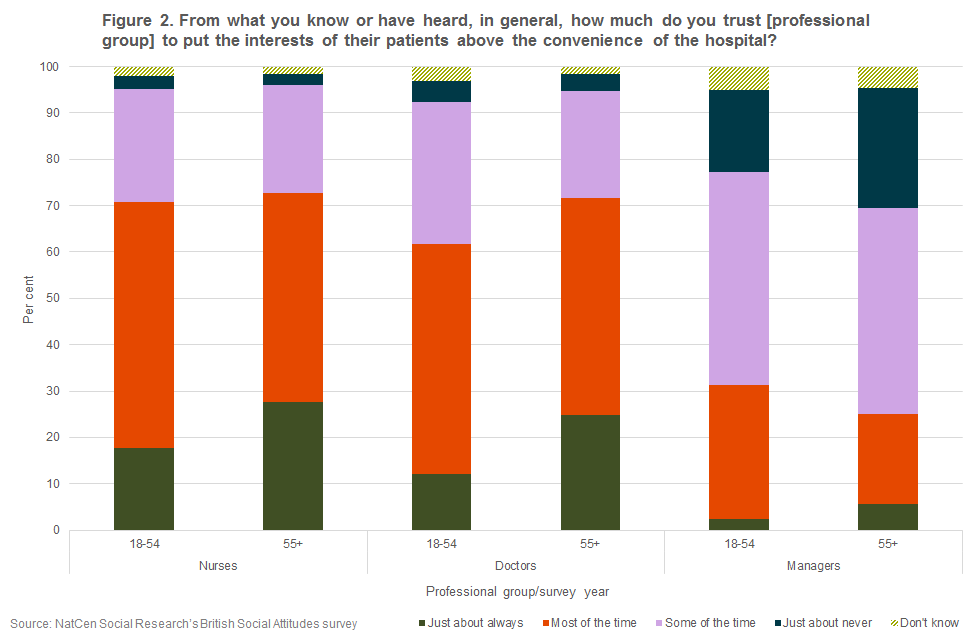 The BSA survey also asked about trust in well-known institutions, including parliament, government and the media; when asked whether they tended to trust these institutions, just 1 per cent responded that they trusted the media a great deal, 2 per cent trusted government a great deal and 3 per cent trusted parliament a great deal. Although the questions were phrased differently, they provide an insight into the different levels of trust that the public places in doctors and nurses compared to those working in other sectors. By comparison to other groups, doctors and nurses appear to enjoy a high and enduring level of public trust.

These findings are supported by the results of surveys by other organisations: Ipsos MORI’s latest polling found that doctors were the most trusted profession, with 90 per cent of respondents trusting them to tell the truth. In contrast, just 16 per cent of respondents trusted politicians and 22 per cent trusted journalists to do likewise. This poll showed that trust in doctors has been consistently high while trust in politicians has been consistently low for the past 30 years.

These insights into public opinion may be relevant to the current high-profile dispute between government and the medical profession over doctors’ contracts and seven-day working. Who will the public support? Will this make a difference to the outcomes of the debates? Both sides are now negotiating a new agreement following talks supported by the Advisory, Conciliation and Arbitration Service. But while the industrial action planned for earlier this month has been postponed, there remains a possibility of future strikes if a prompt resolution is not reached. Might this cause erosion of public trust in doctors, which has, until now, been so steadfast? Or will public favour stretch to supporting doctors over strike action?

The British Social Attitudes survey is conducted annually by NatCen. The King’s Fund funds questions relating to health, and reports on these each year.

How to use patient feedback more effectively to improve services

After more than a decade of steady growth, the number of elective hip procedures is in decline. Deborah Ward and Lillie Wenzel unpack this surprising trend.
Blog

The NHS misses its new target for planned elective care

Siva Anandaciva considers the shift in priorities for the elective care waiting list and outlines three key considerations for developing a new strategy: how to best measure waiting times, setting realistic targets and the importance of short waits for patients.