Next month the government will set out its plans for public service spending through to 2020. As John Appleby explained in his recent blog, the likely outlook is likely to be the largest sustained fall in NHS spending as a share of GDP in any period since 1951. But what about social care?

Care services minister Alistair Burt recently told local authority chiefs that ‘funding is still unclear…I will find out what the funding is when you find out, when the Chancellor stands up in Westminster to deliver the Autumn Statement.’ While we are waiting, our analysis of past trends and future projections for social care makes disturbing reading.

In the 15 years to 2009, local authority net spending on adult social care for all age groups increased by an average of almost 6 per cent a year over and above inflation (figure 1). But because social care forms part of local government spending – which, unlike the NHS, was not ring-fenced in the 2010 Spending Review – this trend has reversed sharply over the past five years. Spending has dropped by an average of 2.2 per cent a year since 2009.

Money has been transferred from the NHS budget to social care (reaching £1 billion last year), which has helped a bit. Without this, the real-terms fall would have been 3.6 per cent. Most of this transferred money came from the NHS’s average annual real-terms increase of 0.84 per cent. Understandably, many are worried about further reliance on an increasingly cash-strapped NHS to prop up social care.

Figure 1: Annual real change in net adult social care spending in England, with and without transfers from the NHS budget, 1994/5 to 2014/15 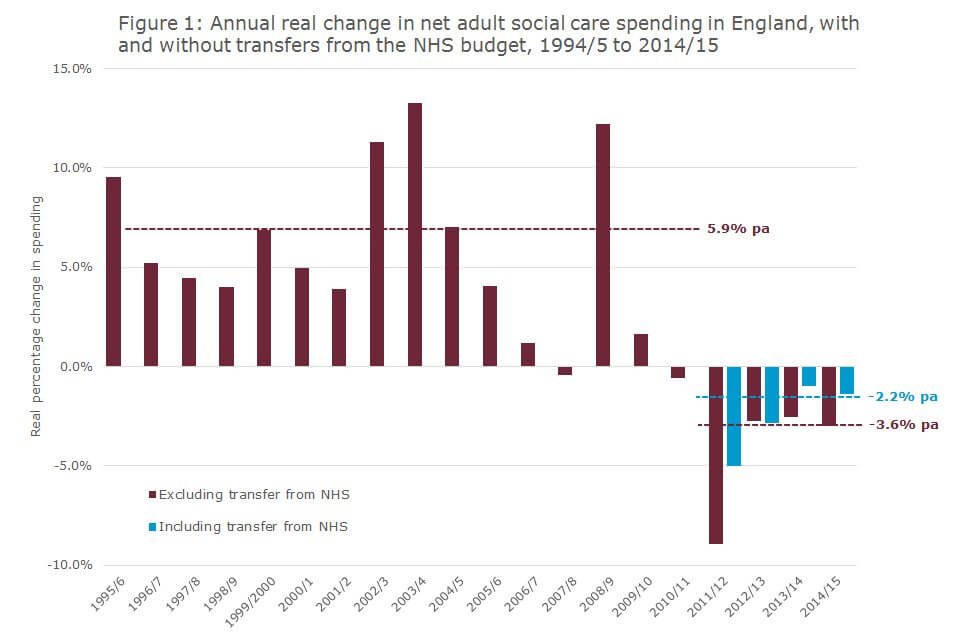 The picture becomes gloomier still when account is taken of our ageing population, especially people aged 85 years and over, who are likely to have the greatest need for social care support. Spending per capita on this group is now back to around what it was in 2002 (figure 2) and it would have been lower still without the NHS transfer. Funding has not kept pace with the 34 per cent increase in the over-85 population over this period. 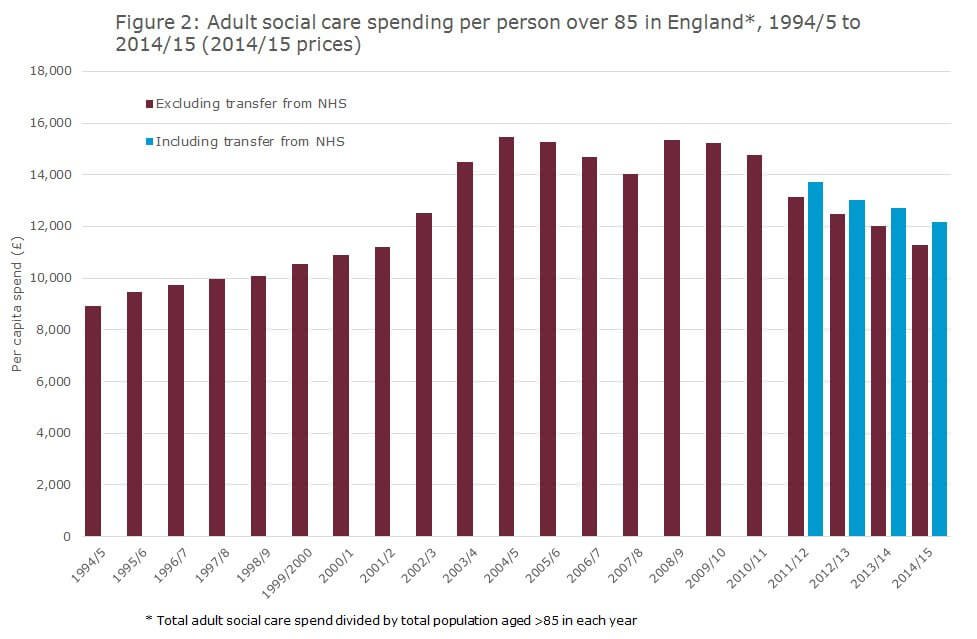 These pressures have intensified over the past five years. Total spending on social care services for all age groups is over 10 per cent less than it was in 2009 (figure 3). It would have been 17 per cent without the NHS transfer.

It is no wonder that over the same period the number of people receiving services has plummeted by 25 per cent to 2013/14 (and possibly by 30 per cent to 2014/15), although it is important to note that there are wide variations across 152 local authorities and some of this fall could be explained by positive developments such as the expansion of re-ablement services that have reduced the need for long-term care. We will be exploring this further in our new social care research project with Nuffield Trust. 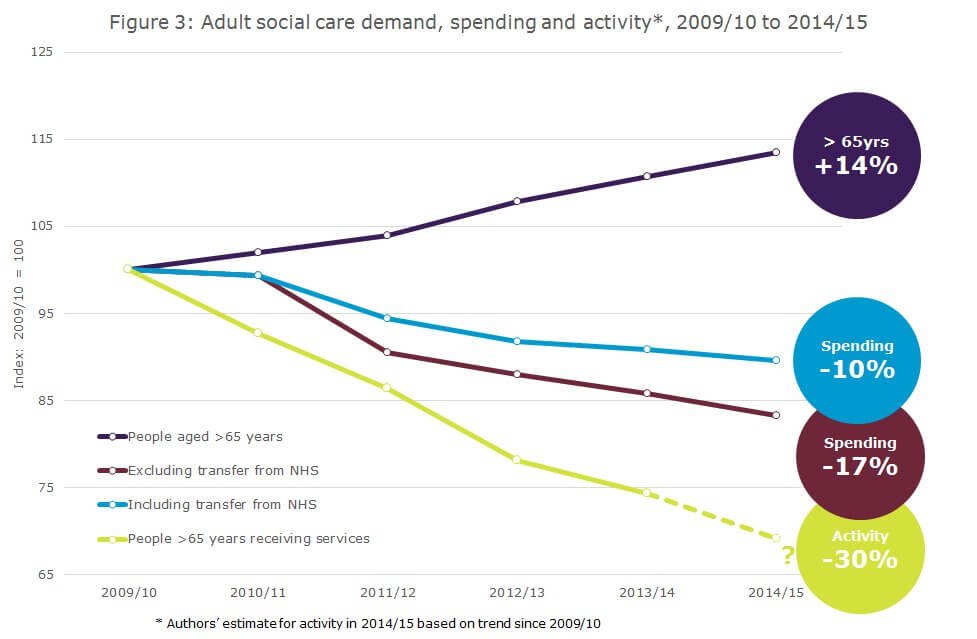 Against this bleak backdrop, the prospects for social care are grim. In our submission to the Spending Review we called for social care to be protected from further cuts and for the money previously agreed for the postponed Care Act funding reforms to be retained and invested in social care. But non-protected departments have been asked by HM Treasury to model cuts of 25 and 40 per cent – so further cuts seem inevitable.

What would happen if the spending cuts applied to social care over the past five years continue over the next five? Spending on social care for people of all ages as a share of GDP has already begun to fall. It was roughly 1.2 per cent in 2009 but if cuts continue at the same rate it will have halved by the end of this parliament to barely more than a half of one per cent of GDP (figure 4).

This would be an astonishing and unprecedented reduction at a time when we should be devoting a bigger share of our national wealth to our ageing population and when there are also more younger people with care and support needs. International comparisons suggest that spending is relatively low and there is no evidence that any other advanced country has contemplated scaling back the provision of care to this level. 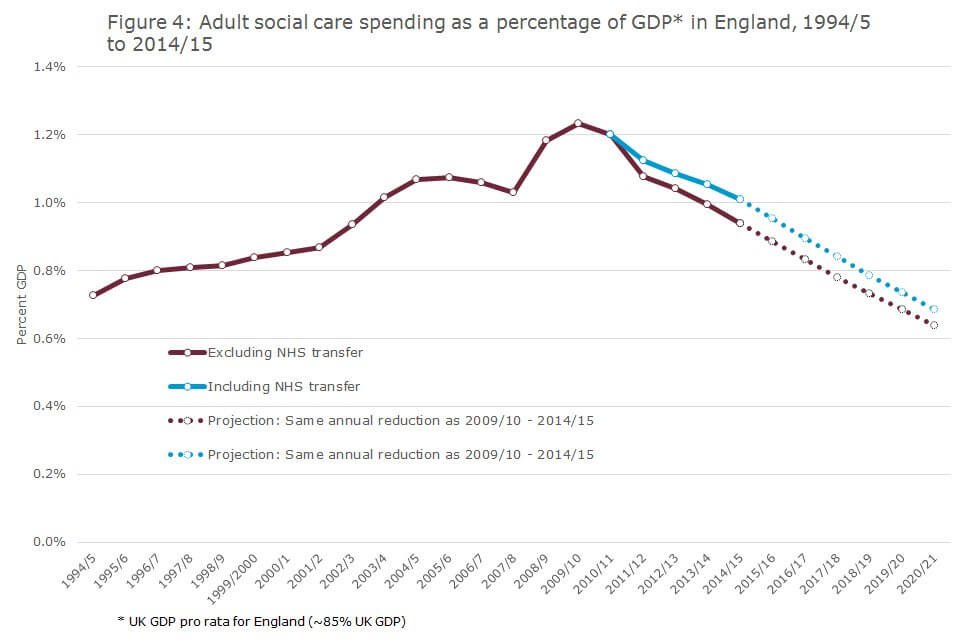 With the Barker Commission having written to the Chancellor to reiterate their call for a new settlement for the NHS and social care – triggered by their alarm that the limited reforms to social care funding have now been returned to the political long grass – the human and financial cost of inaction will continue to accumulate. The impact will be greatest on the most vulnerable members of society. Without a new settlement, we face the prospect of an entirely different kind of social care system to the one we have now.

The Barker Commission answered the question of whether having separate systems for health and social care is still fit for purpose.
Report

Statement from the Barker Commission: The future of health and social care

A statement from the Barker Commission to the Chancellor ahead of the Spending Review on the state of social care and its funding.
Evidence and consultation

The King's Fund's submission to the 2015 Spending Review argues that if the government is serious in its commitment to health and social care, it must ensure that adequate funds are available both in this parliament and longer term.

I was pleased that the Better Care Fund has got an additional £1.5 bn next year, but want it to be spent on genuine better care (such as NICE recommended Mindfulness Based Cognitive Therapy 8 week courses) to teach patients and social care service users how to look after themselves better, so that they don't need so much public services. See papers on section 9 of www.reginaldkapp.org
Makes pretty gloomy reading Themes around resilience to survive & ideas for success are part of how we are approaching the harder times ahead. A mixture of positive action promoting for example our Devon Care Kite Mark for care homes as well as the pride & enthusiasm we have developed within our local culture as a growing coalition of providers is paramount but must be combined with strong words of protest about the 'Perfect Storm' hitting social care providers. The pressures include - an ageing population with complex needs, coming to care homes too late often, increased expectations of what can be offered & managed, major problems recruiting and keeping staff especially in nursing homes, the CQC inspection regime in social care being much more rigorous - which is hard to argue against yet is adding to the disconnect re expectations and the reality of reasonableness. Add to these a significant emphasis on safeguarding capacity linked many feel to Mid Staffs, Winterborne View, The Old Deanery etc. again hard to argue with save the sometimes absent 'proportionality' of process regarding at times minor concerns that lead to good staff being suspended pending protracted investigations where the whole staff teams and individuals morale are damaged and stigmatised. Increased costs of course not least the living wage impact, auto pension enrolment contributions and extra holiday entitlement. - all great things - hard to argue with but for small family run providers not seeing fees increases to accommodate these it simply adds to the worry and risk. Adverse media headlines also add to the frustrations where we generally hear and see many shock horror stories and few celebrating great care, fun, happy times and where people's lives have been positively transformed in great 24/7 care. I've spoken at many conferences nationally and overseas about mental health care and numerous NHS topics. I'm chairing a big nurse focused conference at the Birmingham NEC tomorrow -11/11/15 presenting to the 700 strong audience about dementia care and the work my 2 small energised care homes do as well as our kite mark work. I'll be saying as I do. Make life in a great care home something to look forward to by not fearing joining in with promoting what they do, become a 'friend'. Taking the worries away for older folk struggling, experiencing avoidable admissions to hospital, dealing with vulnerability, loneliness and dread and that these can be alleviated for around the same per week as it costs per day in a hospital bed. We must protect both health & social care not just the NHS. It's that simple and that important
The Autumn Statement will be Osborne's nemesis.
Excellent piece both. It would be helpful if your % comparisons & real terms spend reductions could be linked with those published by ADASS & LGA so that there is no ambiguity. Political & public understanding & appreciation needs to be indisputable. Also when Government talks 'Whitehall departments' it is clear that what this means is people, carers, vital sustaining services...
The 'other side of the coin' Social Care is in fact the most crucial element of 'Care in the Community' without adequate funding, well educated and informed 'leaders' it is doomed to fail, and the 'story's' we read every day regarding Mental Health today has confirmed it is in 'Meltdown' The LAs must embrace Carers and seek their support in the delivering of a service that is Primarily their responsibility. We need your help and support and you need us. I would suggest that the new Agenda regarding the non delivery of LA services to the most vulnerable ' requires a different approach, Carers are willing to help but LAs must accept they cannot provide the impossible without our help.