This month marks the annual Explore Your Archive week, which aims to highlight the rich content that can be found in archives across the United Kingdom and the stories contained within them. The collection held by The King's Fund's library and archives not only charts the development of the Fund itself, but also the health of people living in the capital and the development of the NHS, from its birth up to the current day.

The King's Fund, as we now know it, was established in 1897 as the Prince of Wales’s Hospital Fund – an initiative of the then Prince of Wales. The initial purpose of the Fund was to raise money for London’s voluntary hospitals, which at the time offered the only health services available to poor people in the capital. These services were funded by philanthropic donations and funding varied between the hospitals. The Fund’s aim was to ensure that charitable contributions flowed towards the hospitals in greatest need, acting as ‘an instrument of change, strengthening the hospitals and the voluntary system’. These early efforts are documented by the Special Committee on Distribution in our first annual report. 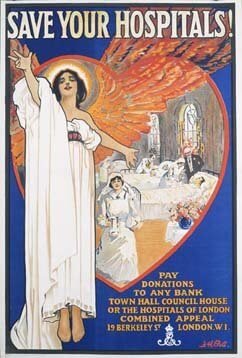 In the early 1900s, the Fund – now called the King Edward’s Hospital Fund for London – began to extend its activities to include inspecting hospitals and encouraging a more rational distribution of health services across the growing city. The Fund established committees to investigate unco-ordinated ambulance services and the difficulties of obtaining an emergency admission to hospital. It published statistical summaries analysing the income, expenditure and costs of London hospitals, as well as patients and bed availability. The Fund provided advice to hospitals about new buildings and even constructed a miniature version of the ideal modern hospital in 1933 to demonstrate the value of good design.

After the foundation of the NHS in 1948, the Fund began to focus its expertise on developing good practice through training courses and giving grants to support initiatives for improving the health of Londoners. Most famously, in 1967 it worked with the Royal College of Art to design a new bed to make patients more comfortable and protect nurses from back strain. The King's Fund bed became standard for hospital and home care use across the country and is still used today.

In 2009, the Fund’s training and research functions were united under a Royal Charter and the organisation was officially renamed The King's Fund. The unique archive collection held by the Fund is extremely valuable as it provides an overview of the issues that have dominated health and care policy during distinct historical phases: from the voluntary hospital model, to the National Health Insurance scheme of the early 1900s, to the post-war welfare settlement that led to the creation of the NHS, up to the present day. It shows how the work of The King’s Fund was ahead of its time and influenced thinking across the health sector.

For instance, the Fund recommended the appointment of a single chief executive of each hospital long before the 1983 Griffith Report. Our organisational audits from the 1990s, which provided information about bed availability and service development, led the way in examining the ‘increased emphasis on patient/user involvement and the move towards evidence-based medicine and the drive towards clinical outcomes’, as this Journal of Quality in Clinical Practice article describes.

The King's Fund began researching patient experience as early as the 1930s. One influential report examined the time that patients were woken in hospital; widespread interest in its findings resulted in most hospitals changing practice so that the majority of patients were no longer woken before 6.00am. The Fund also became an authority on hospital food – arguing for dieticians to oversee hospital kitchens and later setting up a dietetic advisory service for hospitals.

Archives such as this are powerful research tools. They facilitate more accurate international health system comparisons, strengthen statistical analysis, act as a unique reference point for historians of London hospitals and the health system (both before and since the NHS was founded), and provide case studies of best practice. We encourage you to make the most of archival collections such as these – have a look at the Explore Your Archive resources to see how they could make an impact on your own work.

See our physical archive at the London Metropolitan Archives.