Delayed transfers of care, where patients are ready to return home or transfer to another form of care but still occupy a hospital bed, are a hot topic of discussion right now – whether because of money, impact on patient experience or hospital flow. The publication later this week of the findings of NHS Providers’ Right Place, Right Time Commission, chaired by Paul Burstow, will generate further debate.

Before the Commission puts forward its views on what good practice around delayed transfers of care looks like, let’s consider the current situation.

Though the figures for the first five months of 2015/16 show this increase has moderated, figures for this year still represent an 11 per cent increase on 2014/15 (Figure 1).

So why is this? Compared to the same quarter last year, in the first quarter of 2015/16 there were substantial increases in the number of patients waiting for the implementation of care packages to support them in their own home (76 per cent) and patients waiting for residential (21 per cent) and nursing home (11 per cent) places (Figure 3) – all of which we might class as delays attributable to social care. 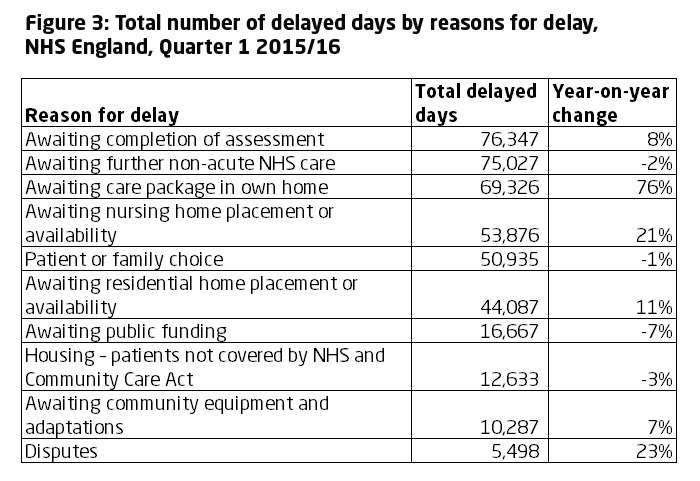 This reflects the pressure that social care has been under recently – between 2009/10 and 2013/14 social care funding has fallen by £1.8 billion in real terms. And in our own latest quarterly monitoring report, 79 of the 90 NHS trust finance directors who took part told us that they felt funding pressures on local authorities have had a negative impact on the performance of health services in their local health economies.

However, when we are considering delayed transfers of care we need to remember that there are some questions around the quality of the data, as we have previously argued. We aren’t convinced that the reported numbers reflect the experience of delayed transfers across England. Currently, the data is only for patients aged over 18, it doesn’t include acute-to-acute transfers and, following conversations with some NHS professionals, we feel there are variations in how local areas are reporting delays.

At a time when resources for all sectors are being stretched to their limits, and with the flurry of admissions that winter normally brings close on the horizon, delayed transfers of care makes for grim reading. Hopefully NHS Providers can supply some more upbeat stories from their commission this week.

If you suffer from a Mental Illness, delayed transfers of Care re 'integration' makes absolutely no difference, the Panorama Programme identified the realism of a Service the Mentally Ill and their Carers know to often 'Revolving door' the less ill are discharged to enable the more seriously ill to be admitted, then it starts all over again.

I am absolutely fed up to the 'teeth' when all we here is the 'talk' about everybody else but the Mentally Ill.

The answer is more funding to the LA based on population, and better Leadership, based on their knowledge of the system, and various subject matters to whom they assigned.

I am sorry to Report there is an enormous waste of money, and in some cases 'man power', who run around like 'headless chicken'. not knowing who is doing what.
Hohummmm. Are we missing the blindingly obvious here? So busy focusing on social care when the majority of the problem still lies with the NHS and its own internal processes?

The risk is that we divert too much attention to Social Care as an issue and an excuse rather than put the NHS house in order. The biggest impact on delayed discharges will come from systematic, consistent and sustained local approaches to the mapping and redesign of NHS discharge processes.

The Treasury are likely to think like this as well!
I do not find anything in Figure 3 that supports your view. But what, in your view, might have caused a deterioration in NHS performance between 2010 and 2015? My impression, admittedly a general one, is that the difficulties lie elsewhere.
My own experience with my mothers care in hospital in London was that social care was brilliant what delayed discharge was total lack of communication. Between hospital gp and nhs community services
I was very interested to read the above and the quick guide. The contention that there are issues with this data will come as no surprise to anyone that has dealth with data collection in the NHS and gives half a damn about whether it actually measures what it purportss to. Regional meetings about data in most areas quickly show you that not only are there differences of interpretation at regional level but that the definitions determined by Richmond House are often - what word can I use - silly? For example, as you sensibly point out, why on earth are the DTOC stats based on a cut off point of Thursday midnight? Sometimes one can only conclude that definitions are created in order to obfuscate the true picture for political ends, not least the DTOC stats. In that context I have a question. On the Andrew Marr show today, in response to a question about "bed blocking" the on the Andrew Marr show this morning, the Prime Minister said that rather than a funding issue the cause was to do with the variability of practice between Local Authorities and the answer was employing best practice. Notwithstanding the issues with the data, I wondered whether the Kings Fund knew what data was being relied on for this statement or whether the Fund had done anywork on this area itself?

Veena Raleigh examines trends in life expectancy at birth up to 2020 and the impact of Covid-19 in 2020, gender differences, geographical inequalities, causes of the changing trends since 2011, and how the UK’s life expectancy compares with other countries.
Press release

'Roughly 1 in 12 people in England are awaiting NHS treatment': The King's Fund responds to the latest NHS monthly performance data

Deborah Ward, Senior Analyst at The King’s Fund, comments on the monthly performance data on A&E, referral to treatment and diagnostics.
Press release