Following a barrage of policy announcements in recent weeks from the Department of Health and national bodies, it is clear that the focus is firmly on creating an NHS that uses its money more wisely.

Lord Carter’s interim report on the productivity of NHS providers was one of these announcements, aiming to set out how £5 billion worth of savings can be made by the NHS. The report includes a new method of comparing operating costs: the Adjusted Treatment Index (ATI). This will be an important tool for identifying opportunities to improve productivity and, according to the report, bring the NHS into line with best practice in other countries. So how will it work?

The proposed new productivity measure is a ratio of a hospital’s actual costs of treating its patients to the national average costs for the particular case-mix of its workload. Index values of more than 100 mean that a hospital’s costs are higher than average, so a hospital performing 100 hip replacements a year at a cost of £3,300 per operation against a national average cost of £3,000 would have an ATI of 110.

As a measure of relative efficiency the ATI is a fairly standard approach. In fact, the government has collected reference costs – as measured by the Reference Cost Index (RCI) – from NHS providers since 1997/8. The RCI is calculated in much the same way as the ATI and has similar aims: to help hospitals benchmark their costs against the national average, and to provide comparisons between hospitals and over time.

However, the ATI is a little more complicated, and potentially more accurate, than the RCI. For example, the ATI adjusts for extra factors, such as the income that teaching hospitals receive.

So, according to the RCI, has variation in cost changed over time in the NHS?

The chart below shows the proportion of hospitals in 2003/4 and 2013/14 with RCI scores +/- 10 per cent of the national average (ie, more than 110 and less than 90). There has been a shift towards the average, with 22 per cent of hospitals reporting an RCI of greater than 110 in 2013/14 compared to 30 per cent in 2003/4. However, it’s impossible to say how much this improvement can be attributed to the publication of the reference costs. 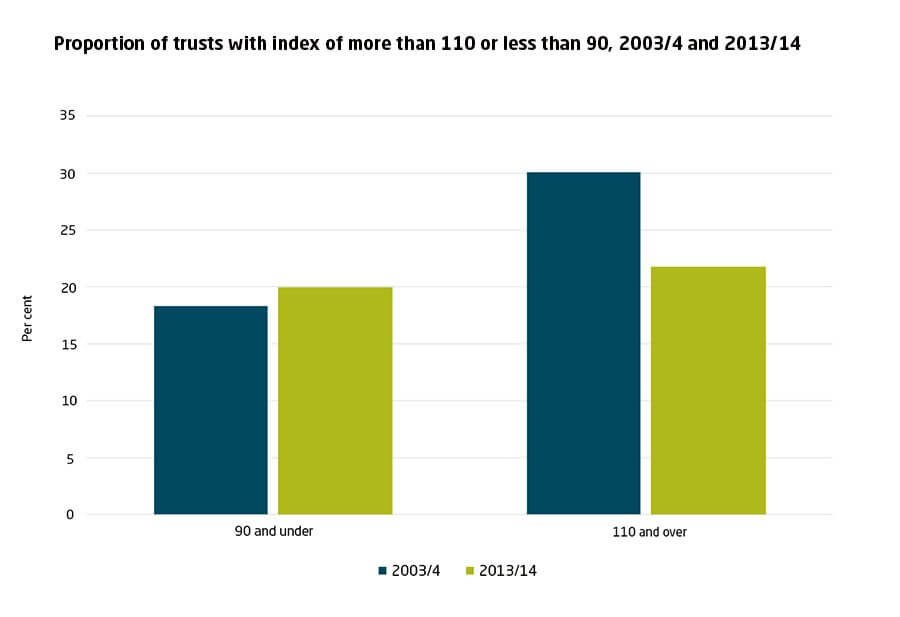 Furthermore, the RCI and the ATI are not comprehensive measures of productivity as they take no account of quality, so a hospital may improve its score by reducing costs at the expense of quality (though they might have achieved greater value by improving both at the same time: the point is, we wouldn’t be able to tell). It is also difficult to make fair comparisons; for example, most of the trusts with unusually high RCI scores are specialist trusts. Perhaps the case-mix adjustment for these trusts is insufficient in the RCI.

As Lord Carter has said himself, the ATI ‘must not be used as a crude weapon’. With the Care Quality Commission (CQC) looking to develop and integrate a measure of resource use into their inspections, the measurement of value for money needs to be fair, comprehensive and understandable. The ATI is fairer and more understandable, but, without addressing quality, it is not comprehensive.

This isn't just about measuring cost well: it’s one thing to tell trusts with a high level of relative cost to improve, but if a trust doesn’t have the capability to improve its current situation by itself, what choice do they have but to run a deficit? Relative cost indices need to be placed into a wider picture of financial incentives, improvement programmes and performance management.

Overhaul of the RCI productivity metric is long overdue, and Lord Carter’s review does suggest further development of the new measure – improving data sources, producing in-year measures as well as providing disaggregated metrics (by different types of expenditure such as pay and non-pay for example). But a key test for the ATI will be its usefulness to trusts in managing their resources and, as we note in our recent review of Better value in the NHS, supporting clinical staff at the frontline to improve the quality and cost effectiveness of the services they provide to patients.

@ cwfrith
I think ATI is another positive step forward for Performance measures, however as you've mentioned David, Efficiency is one thing but Effectiveness (Quality) is also important reducing re-admissions & shortening length of stay for example, in which sometimes costs can be higher in the index procedure but overall better for the patient & more cost effective in the long term. Also I'm not clear how the ATI will take complexity of care for patients & procedures into consideration?