Over the past 40 years there has been a revolution in surgery. A combination of new surgical techniques, advances in anaesthesia, the collection and publication of comparative data, and deliberate policy – including financial incentives for hospitals – has led to a large switch to day case surgery.

It is a quarter of a century since the Audit Commission published its first NHS value for money report. The 1990 review identified several interventions, including cataract surgery and laparoscopic cholecystectomy, that clinical opinion suggested could be carried out as day cases in greater numbers.

The commission’s analysis suggested that if all health authorities in England and Wales, ‘performed day surgery consistently at readily achievable levels for each of 20 common procedures, an additional 186,000 patients could be treated each year without increased expenditure.’

Following the review, the Department of Health set up a task force on day surgery along with £15 million (€21 million; $23 million) of capital funds to expand the number of dedicated day surgery units. By 2001, almost all trusts had at least one unit.

But the 2001 follow-up review by the Audit Commission pushed for further progress: ‘If all trusts could achieve the levels of the best performers (the upper quartile of the distribution of the percentage of day cases), 120,000 existing inpatients in England and Wales could be treated as day cases to the benefit of all concerned.’

Figure 1 shows trends in England from 1974 to 2013 in the proportion of all elective and non-elective procedures that were carried out as day cases each year. From a low of around 7 per cent in 1974, this proportion increased to nearly 35 per cent by 2013 – an increase in cases from around 417,000 to 6.3 million a year. In fact, a more appropriate comparison would be for elective procedures only. However, earlier data collections did not separately identify non-elective activity. More recent data from 1998 onwards suggests day cases as a proportion of elective activity have increased from 67 per cent to 78 per cent in 2013. 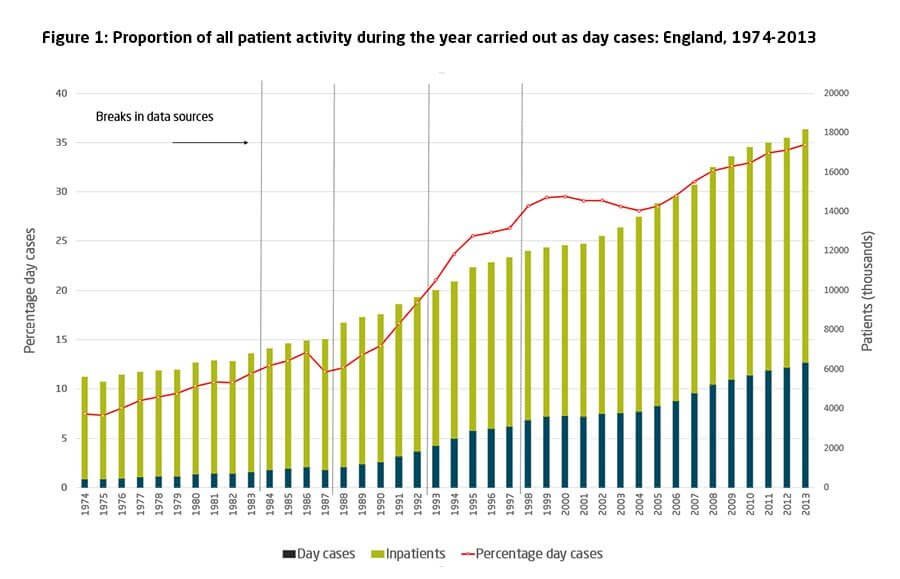 As day case patients cost less to treat than patients who stay overnight as inpatients (in 2013–14, the average day case cost was £698 and the average elective inpatient case £3,375), the increasing proportion of day case activity has helped reduce overall costs.

Imagine if the switch to day cases had not changed. Based on national reference costs reported by English hospitals, the total cost of treating the total 6.96 million elective day and inpatients in 2013 was around £8.9 billion. To treat this number of patients, but with the proportion of day cases as observed in 1998, would cost nearly £11 billion (more than an additional 22 per cent). By treating more patients as day cases, the NHS had in effect saved around £2 billion by 2013 (Figure 2). 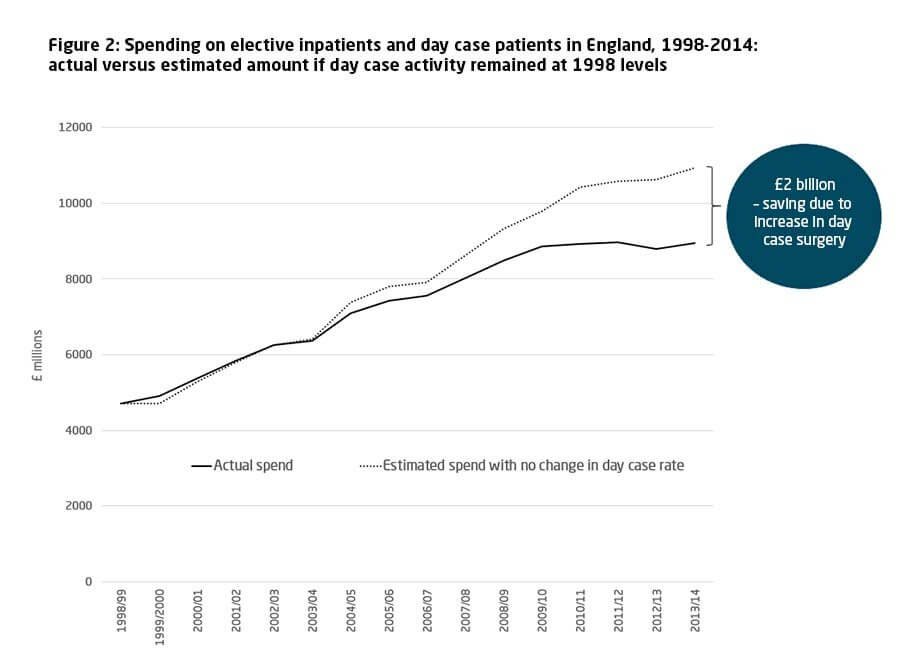 This is likely to be an overestimate, however, as it is based on the average costs of day cases and elective inpatients. In reality, patients switched from inpatient care to day cases are likely to have been those with less complicated conditions, who would have had shorter stays and been less costly to treat.

Even though day cases now account for nearly 80 per cent of all elective procedures each year, it is likely that there is still scope for further increases. For example, the proportion of day case surgery still varies across England even for procedures for which there is clinical agreement about the use of day surgery, such as haemorrhoidectomy and bladder tumours.

Assuming the proportion of day cases continues to increase at the same rate for the next decade as it has done in the 15 years since 1998, then, all other things being equal, the total spent on elective care in 2013 would pay for 22 per cent more patient episodes in 2023 (Figure 3). 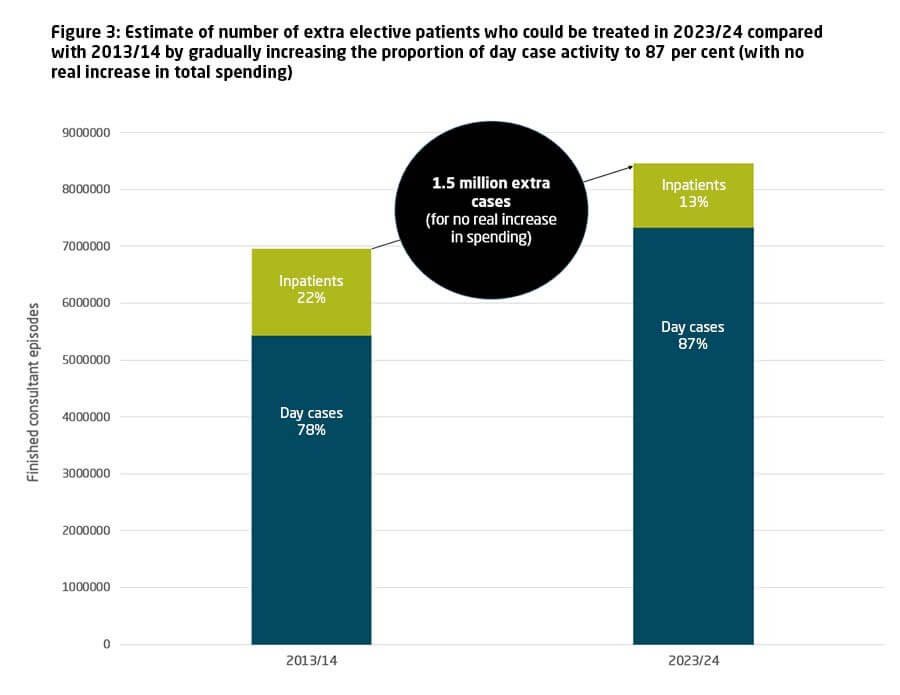 This blog is also featured on the British Medical Journal website.

Thanks for posting this. Your blog is so interesting and very informative. Interesting article What was the biggest change lever for the NHS to shift to day case surgery? The DH task force, the money, patient expectation, or something else? Was there ever a national target for Day case surgery?

Thanks for posting this. Your blog is so interesting and very informative. Interesting article What was the biggest change lever for the NHS to shift to day case surgery? The DH task force, the money, patient expectation, or something else? Was there ever a national target for Day case surgery? http://onedaytop.com/halt-migrant-family-prosecutions-of-us-border-agen…

Interesting read and a positive news story! It would be interesting to see what proportion of day surgery patients end up being admitted due to complications either on the day itself or post op?
The consequences of retained surgical tools include injury, repeated surgery, excess monetary cost, loss of hospital credibility and in some cases death of patient.
Interesting article - I wonder if Ambulatory Emergency Care (AEC) will tell a similar story in 40 years. What was the biggest change lever for the NHS to shift to day case surgery? The DH task force, the money, patient expectation, or something else? Was there ever a national target for Day case surgery?
Very interesting- thanks for posting. Just out of interest, do these calculations of day surgery include or exclude endoscopy patients, given that in many hospitals, the Endoscopy unit is still (and used to be even more in the past) part of the day care unit?
If endoscopy is included in these numbers, it would be interesting to see what share of the total savings, endoscopy takes. Of course, that would lead to interesting numbers for many trusts- and generate more funds back into Endoscopy units rather than to the Surgical directorates.
Thanks
Reshma 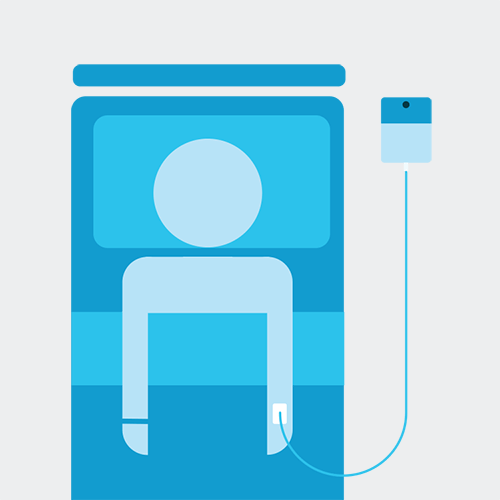 'NHS hospitals face competing demands for their limited resources and a coherent national strategy for balancing these pressures is urgently needed ahead of winter,' says Deborah Ward, Senior Analyst at The King’s Fund.
Blog

Digital tools and services are increasingly being used in health and care, but what happens to all the data that is collected, who should have access to it and who decides? Pritesh Mistry outlines the value of trust and transparency in these complex agreements
Report