As Ipsos MORI has been reporting for some months now, the NHS is a big issue for the public, and now nearly half of all Britons surveyed (47 per cent) say the NHS and health care is their top concern when deciding how they’ll vote in the general election. The public’s concerns have been reflected in the political parties’ manifesto promises – a combination of more money and a long shopping list for how the extra cash will be spent (more doctors, more nurses…24/7 motherhood, and a free prescription for apple pie). But what do the promises add up to, and is the NHS safe in anyone’s hands? (And why is the politician’s favourite number 8,000,000,000?)

The manifestos’ focus on how much money should be spent on the NHS has been driven by a future funding scenario described by NHS England, Monitor, and other national NHS organisations in their joint forward look at how the NHS might fare over the next five years. Predicated on some upfront investment in infrastructure and operating investment (that is, keeping the business going), NHS England estimates that although the NHS needs a funding increase of £30 billion (€42 billion; $45 billion) over and above inflation by 2020/21, it could increase productivity by 2 per cent a year over the next few years and then by 3 per cent a year as the new ‘care models’ come on stream. In effect, this generates the equivalent spending power of £22 billion, leaving just £8 billion to be funded by the taxpayer. To get to such a real increase will require a cash increase of nearly £23 billion.

While there is nothing in the NHS national bodies’ Forward View that details the evidence or science behind the productivity assumptions (and hence the figure of £8 billion), both the Conservative and Liberal Democrat parties have signed up to NHS England’s funding scenario (Figure 1). This amounts to an average real increase of 1.1 per cent a year – similar to the increase over the last parliament. However, there is a lack of clarity about the Conservative promise, which could amount to a bit more than £8 billion depending on the period the pledge covers. Importantly, with no details on the path the Conservatives will take to reach their promise, there is a worry that the bulk of the increase could come in the later rather than (as needed) earlier years of the next parliament. 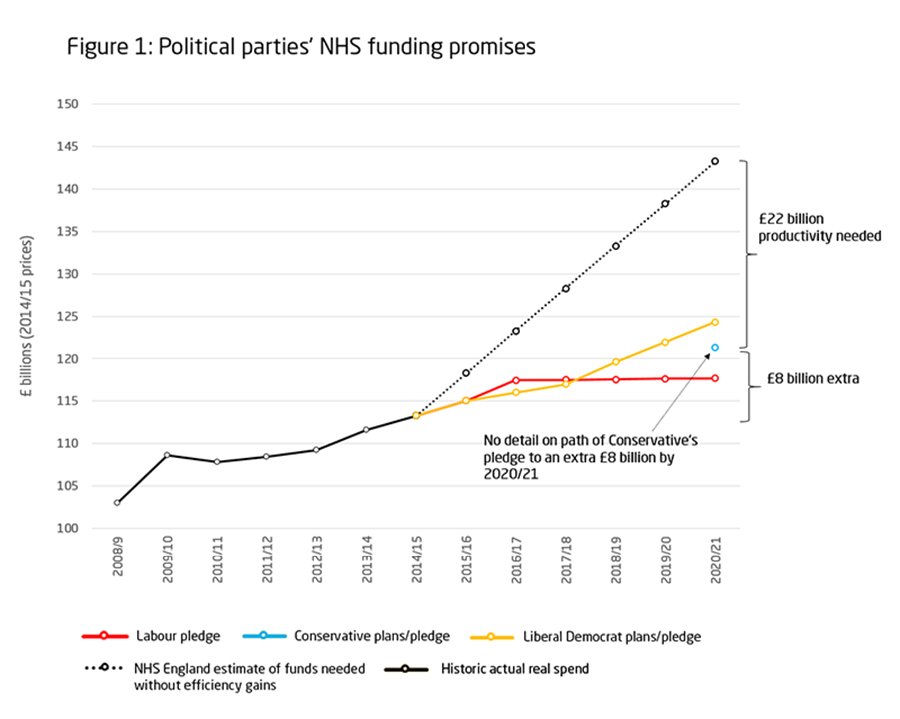 While pledging a minimum of an extra £8 billion, the wording of the Liberal Democrat’s manifesto suggests that funding from 2018/19 to 2020/21 will also depend on growth rates in the economy. On current projections of gross domestic product (GDP), this could translate into an overall real increase in NHS funding by 2020/21 of just over £11 billion (Figure 1).

The Labour Party promises a one-off increase of £2.5 billion a year over and above inflation and tying the revenue generated by a new tax on houses valued at over £2 million and some other measures. Assuming the revenue from this new tax starts in 2016/17, that it rises in line with inflation, and that this year’s spending plans are honoured, this would give the NHS extra cash of around £18.6 billion by 2020/21 at today’s prices, a real increase of £4.4 billion (about 0.6 per cent a year).

While the opportunity cost (higher taxes, more borrowing, or less spending elsewhere?) of the Conservative’s promise is less clear than for Labour’s, the Chancellor, George Osborne, has pointed to the funding record over the last parliament (in fact, from 2010/11 to 2015/16) and a real rise of £7.3 billion for the NHS as some evidence that the party can do this again. Of course, this wasn’t a planned increase – more than half was a windfall from lower than forecast inflation (resulting from a longer than expected recession) (Figure 2). 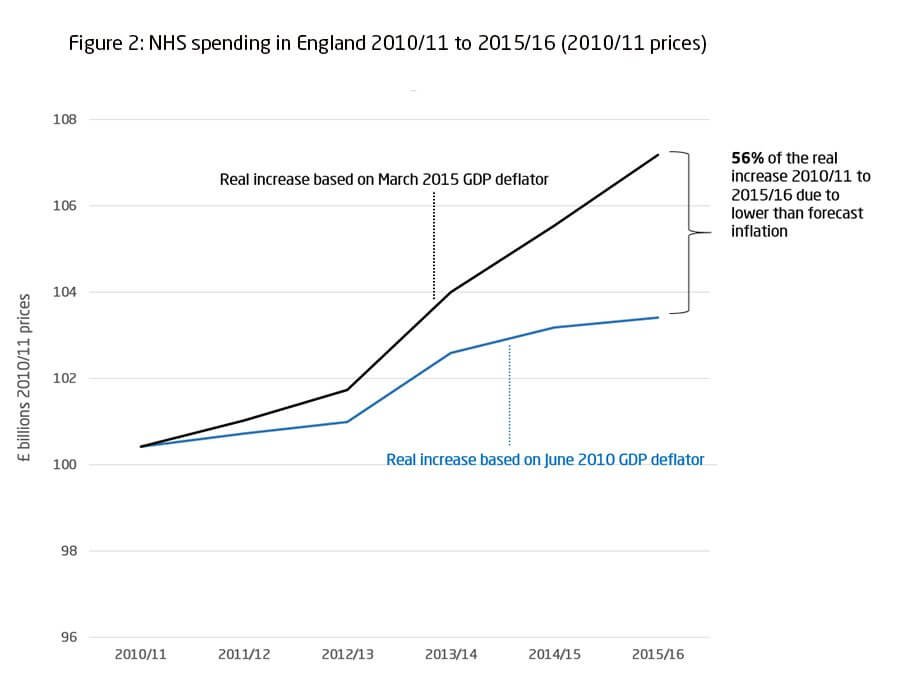 Nevertheless, what all parties will be banking on is that a growing economy will provide more tax revenue to spend. On this, the Office for Budget Responsibility projects a real increase in GDP to 2020/21 of around 2.5 per cent a year; this means a bigger pie that may give the next government some financial room for manoeuvre.

What do any of these promises mean for the NHS? Two problems loom. The first is that even with the most generous promises, the NHS will have to make up a £22 billion shortfall through increased productivity. There is mixed evidence that it has been able to meet a similar shortfall over the past four years. Official figures suggest it has generated nearly £19 billion in productivity gains (Figure 3), but around half of this saving is an assumption based on the real price cuts imposed on hospitals; it is less clear that hospitals responded perfectly to the price cut by reducing costs without affecting quality, for example. Moreover, productivity plans have not been met in the past two years, and with rising waiting times, for example, quality has suffered – as have finances, with hospitals likely to record an overspend of at least £800 million in 2014/15 (Figure 4). Furthermore, the tactic of holding pay rises down, which has reduced costs by around £400 million a year – is not sustainable in the long run. 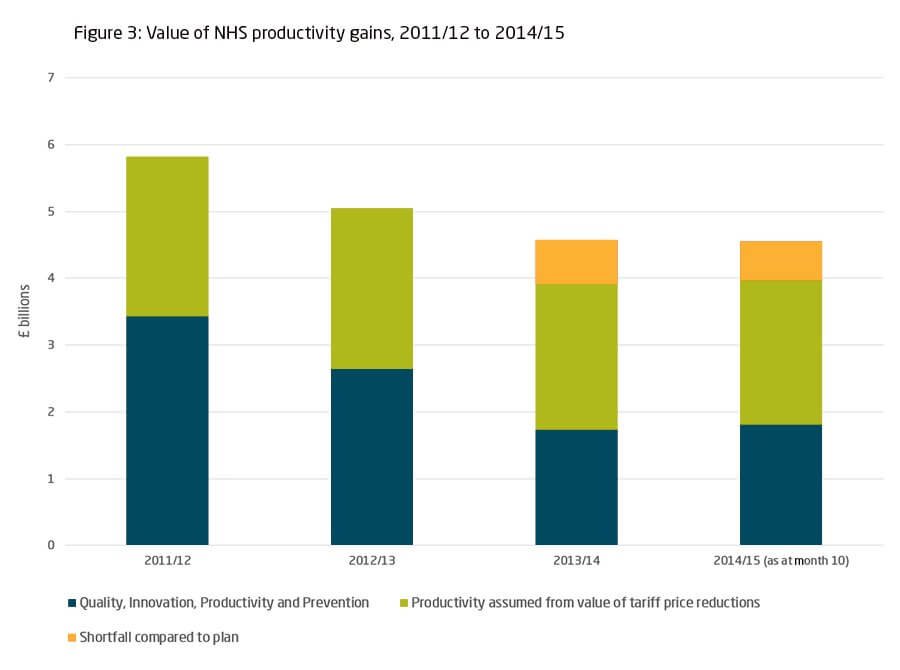 This raises the second problem. While the political focus has been on funding at the end of the next parliament, the NHS faces an immediate financial problem. None of the main political parties’ election promises have indicated how the NHS is to deal with more than half of all hospitals starting the year overspent, or how the NHS will deal with the opportunity cost of contributing more than the entire cash increase of £3.3 billion this year to the Better Care Fund to be spent jointly with local authorities. Longer term, there will be scope to improve productivity. But short-term financial pressures are in danger of knocking the NHS off course.

A pessimistic view is that rather than doing more with less, the NHS ends up – in the short term at least – simply doing less with less.

This blog was written for the British Medical Journal website.

How is the NHS performing? January 2015: Quarterly Monitoring Report

Our latest survey of finance directors shows a deepening pessimism about the current financial state of health organisations and worries about the coming financial year.
Press release