Up until now, CCGs have had a statutory duty to support quality improvement in primary care, but NHS England has been responsible for commissioning duties. From today, CCGs that take on fully delegated co-commissioning responsibilities will be responsible for – among other things – commissioning general medical services, including performance management of the GP contract, awarding new contracts, and renewing or varying existing ones.

This presents an exciting opportunity for CCGs to foster their close links with GPs and to use their expert knowledge to drive the changes in primary care, including developing the models set out in the NHS five year forward view. However, the new relationship this creates between the CCG and its membership will have to be carefully navigated if it is to deliver on its promises, as Holly Holder my co-investigator at the Nuffield Trust also outlines in her blog.

In January and February 2015 we surveyed GPs and practice managers in six CCGs to find out how they felt about co-commissioning and their CCG’s role in primary care. The results are published today, as part of an ongoing joint project by The King’s Fund and the Nuffield Trust.

Overall, more respondents in our survey felt positive rather than negative about co-commissioning. But perhaps unsurprisingly, the views of those closely involved with their CCG were quite different from other respondents. While 81 per cent of CCG governing body members felt positive about the policy, just 30 per cent of GPs and practice managers with no formal role in the CCG felt that way. Most of those with no formal role described their feelings as ‘neutral’ (43 per cent), indicating that they have yet to form a conclusion about the risks and rewards of co-commissioning.

Co-commissioning: how do you feel about this development? 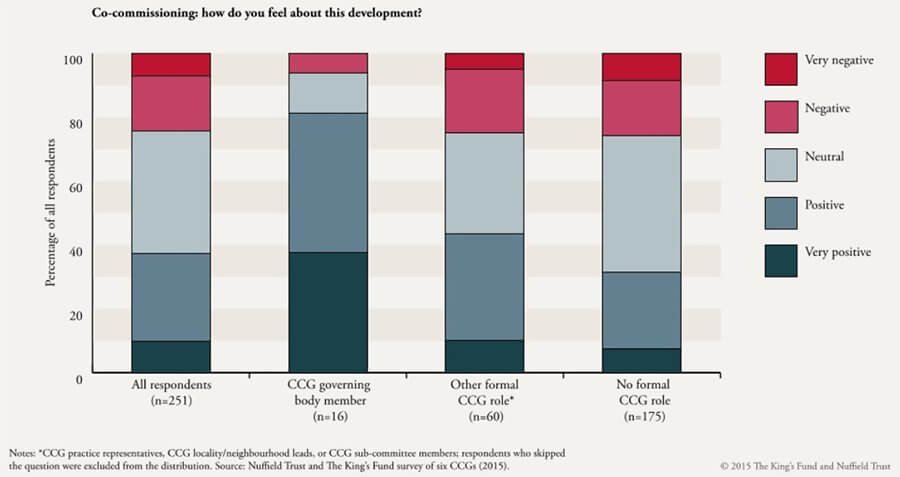 Getting those undecided members on board will be essential to the success of co-commissioning. CCGs were set up as membership organisations made up of GP practices. To implement major changes in primary care, each CCG will need to foster good relationships with its members, and between the practices that make up the CCG.

However, our findings indicate that CCGs’ new performance-management role could prove unpopular among their members. When we asked GPs what mechanisms they felt the CCG should use to support improvement in primary care, the most popular were facilitating GP training and education (76 per cent in support of this) and encouraging practices to review comparative data (63 per cent). The least popular were harsher performance management tools. Only a quarter of the GPs we surveyed felt the CCG should set targets or objectives for practices and only 13 per cent felt that the CCG should use sanctions against underperforming practices.

This slidepack presents the key findings from a survey of GPs in six clinical commissioning groups. The survey explored members' views of their CCG and its role in primary care.
Completed project

We worked with the Nuffield Trust to understand the development of CCGs and the challenges they face.
Completed project

The NHS after the Health and Social Care Act

The Health and Social Care Act 2012 created the most wide-ranging reforms to the NHS, since it was founded in 1948. We look at six key aspects of the new NHS after the Act came into force.

GPs involved with the CCG have little time now to be with their patients, and could there be a 'conflict' of interest? The BMA recently responded to my concerns on the 'integration' process of GPs, where it was clear that the CCG were responsible for commissioning, yet the GPs are failing in the process of 'integration' because they don't know the process, or their partners in 'integration.

What progress has been made around effective GP involvement in commissioning? This report from The King's Fund and the Nuffield Trust assesses what has been learnt so far and makes recommendations for the future.

Clinical commissioning groups (CCGs) have secured better engagement from GPs than previous forms of commissioning but still face numerous barriers to putting power in doctors hands, according to a new report published by The King's Fund and the Nuffield Trust.

We worked with the Nuffield Trust to understand the development of CCGs and the challenges they face.