Post-Francis, much has been said about the style and quality of leadership needed in the NHS in order to deliver high-quality, compassionate care. But one, often overlooked, part of the equation is how to identify, recruit and retain the current and future senior leaders needed to take on this leadership challenge.

Blogs, news articles and The King’s Fund’s own ‘ear-to-the-ground’ findings suggest that there is a high ‘churn’ of board members through NHS provider trusts, increased reliance on interims, and difficulties in nurturing the next generation of board members.

Our new report, Leadership vacancies in the NHS: what can be done about them?, looks at data and evidence around the current level of NHS board vacancies, the potential reasons for these vacancies, and puts forward some suggestions for action.

When I spoke to chairs, CEOs and medical directors in trusts about the reasons behind the high level of vacancies, one message that came through strongly was the increased personal exposure felt by board members. The Mid Staffs scandal, and the media and political response to it, has left many senior leaders unwilling to take risks and may even be discouraging some people from taking on these potentially high-risk roles. A perceived blame culture in the NHS is especially detrimental where board members are expected to implement complex change, working to what are often unrealistic timescales and in situations where their sphere of control is limited, such as service change involving a range of other providers.

The question that candidates below the board level may often ask themselves when considering whether to make the move up to board level is: why would anyone want to take on these roles? This is especially the case where a trust is in special measures or is seen as poorly performing, putting off good candidates from applying to a ‘toxic brand’. Sadly, it is often these organisations that need our most skilled leaders to effect change and turnaround. A number of our interviewees said that the reward no longer seems to justify the risk, not in terms of remuneration, but the ability to deliver improvement, to take forward decisions and to maintain a sustainable work-life balance.

Our research, carried out in partnership with the HSJ Future of NHS Leadership Inquiry, found that the most commonly occurring board-level vacancy is the finance director post, a situation that could have a significant impact on the already financially troubled NHS in the future. On average, nursing director posts were vacant for the longest time – suggesting these clinical roles are harder to recruit to (see figure below).

Length of vacancies in months 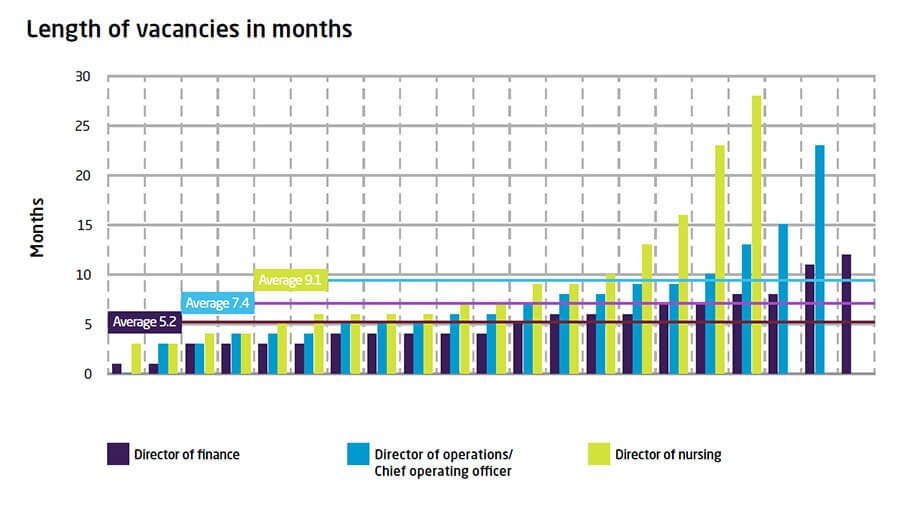 One reason that clinicians may be reluctant to take on board-level positions – either as a nursing director or as a medical director – is the risk of becoming de-skilled as they reduce their clinical work in order to take on the more strategic board duties.

So what can be done about addressing board-level vacancies at an organisational and national level? It’s clear that organisations will gain by taking responsibility for this issue themselves and leading the development of senior leaders through implementing robust talent management processes and leadership development programmes. There is also a role for national bodies and politicians in minimising regulatory burden, resisting the temptation to slip into command-and-control behaviours and being too quick to publically attribute blame for perceived failures of senior leaders.

What I found most interesting about the solutions being suggested by the people I spoke to during the research was that they wanted to see a more appreciative culture in the NHS and within organisations. In our report, we recommend two key enablers for boards to develop the kinds of cultures that deliver high-quality, compassionate care. First, adopting a collective leadership model – as opposed to command-and-control structures – with a leadership strategy setting out the behaviours and competencies needed, including effective talent management and succession planning. Second, using values-based recruitment to find the right candidates for board-level positons.

Many providers are already doing good work around examining their organisational and leadership cultures which will be crucial in making executive positions more attractive for applicants and reducing the ‘churn’ of executives through the system.

Leadership vacancies in the NHS: What can be done about them?

Our research with the HSJ Future of NHS Leadership inquiry highlights the difficulty NHS organisations face in recruiting and retaining people for executive positions.
Press release

A third of NHS providers have at least one board-level position not permanently filled, research by The King’s Fund and HSJ Future of NHS Leadership inquiry has found.

i am currently on a fast track leadership development programme with the leadership academy, sponsored by the Secretary of State. A well designed programme to equip the next 50 senior leaders. Perhaps the recognition exists but the people don't just now. We need to build confidence in the great people we have working in the NHS to succession plan for the next 10 years
As well as the issues of growing leaders, I'm minded of the discussions last decade between Barber on Deliverology and Seddon on systems (plus critique of command and control in general) plus Simon Caulkin's Observer piece post mid Staffs that Targets can Kill (22 March 2009).

In this case killing careers perhaps?

'It is a bitter irony that so many health and care staff are made ill because of their work,' says Suzie Bailey, Director of Leadership and Organisational Development at The King’s Fund, responding to the Health and Social Care Committee report on workforce burnout and resilience in the NHS and social care.