As the dust settles on the Chancellor’s Autumn Statement, this is a good time to review what it told us. I think it contained three big messages: one on money, one on reform, and one on social care.

The first big message was about money. Prior to the Autumn Statement the plan was to provide the NHS with an additional £2.07 billion in 2015/16 which, after accounting for inflation, translated into a small real-terms uplift. The Chancellor will now provide a further £1.25 billion, taking the expected real-terms growth up to just under 1.5 per cent (see figure 1). 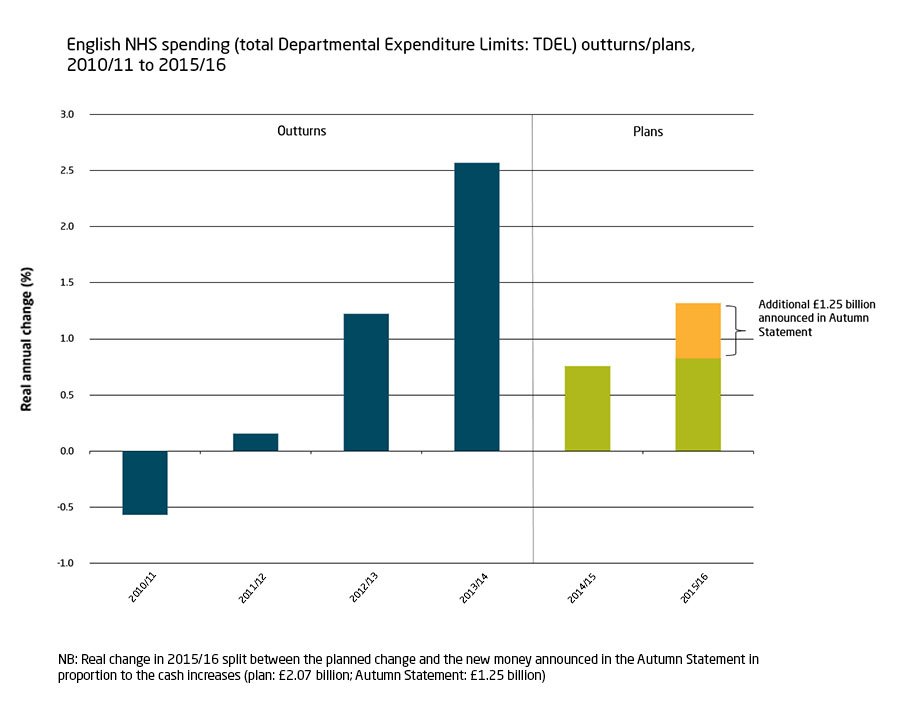 Measured against the likely hit on other parts of the public sector, this is generous – although less generous if measured against the long-term track record on health spending or indeed, NHS growth in 2013/14. To this £1.25 billion the Department of Health will add another £550 million from its own central budgets and NHS England will contribute a further £150 million, although we do not yet know which budgets will release the savings needed to generate this £700 million top-up. Taken together this creates a package just shy of £2 billion.

£1.5 billion of this money will go to ease financial pressures in the NHS – pressures that have been mounting this year and that many expect to worsen next year. Eyes will now turn to 2014/15 to see whether the NHS can live within its means this year, and, of course, to the competing offers of the political parties over NHS funding after 2015/16. After all, the NHS five year forward view relies on the NHS delivering very challenging productivity improvements until 2020. Yet, even with the savings these improvements will release, the NHS still needs a further £8 billion in additional funding over and above inflation by 2020/21. As important as it undoubtedly is, the additional money for 2015/16 is just the first down payment.

The second big message was made clear in paperwork from HM Treasury: `the NHS “five year forward view” outlines a vision for a more sustainable, more integrated health service that cares for people closer to home. The Autumn Statement sets out the government’s support for that vision’. This growing consensus around the forward view means that, of the new money, £200 million is to go a transformation fund to help establish new models of care. This too is likely to only be the first instalment as the scale of transformation required in the NHS is unlikely to come as cheap as this, something that The King’s Fund and The Health Foundation are currently analysing together.

A further £250 million (repeated in each of the following 3 years) is also made available to help re-develop GP practices. If there were any doubts about the current government’s enthusiasm for the five year forward view, this should allay them, at least as far as the NHS goes. It will be interesting to see if there is as much enthusiasm for the public health elements of the forward view and equally interesting to see if any political party explicitly signs up to finding the £8 billion extra needed by 2020/21.

The third big message came on social care. This may seem surprising as the Autumn Statement was pretty much silent on social care. But that, unfortunately, is the message. With the Institute for Fiscal Studies variously describing the required cuts to government spending as `colossal’ and `huge’ – and that’s before extra money is found for the NHS – the cold wind already blowing through social care budgets is likely only to get colder still. This cannot be sustainable and only underlines the need to find a common solution to the combined challenge of health and social care funding, as the Commission on the Future of Health and Social Care in England has so eloquently argued.

The NHS five year forward view set out a positive vision for the future based around seven new models of care. Here we highlight our research, analysis, events and other content relevant to the main themes in the report.
Active project

Our quarterly monitoring reports provide a regular update on how the NHS in England is performing. We examine the views of finance directors on the productivity challenge they face, as well as key NHS performance data.
Completed project

The Chancellor used the Budget to give the NHS and public services funding to deal with the effects of coronavirus. Siva Anandaciva looks at this and other measures affecting health and social care.
Press release

Looking ahead to the Budget: what should we expect for health and care?

Ahead of the Budget on 11 March, Sally Warren considers what should be included to enable the new government to deliver on its manifesto commitments, from NHS infrastructure and staffing, to social care and public health.