The factors that influence our health do not just include the availability and standard of health care and our genetic makeup. Other influences – lifestyle, the physical, social and economic environment – play an equal, if not more important role. If population health is to be protected, funding for the NHS needs to be safeguarded, but other budgets – for housing, education and leisure facilities – are important too.

The fact that health is not just about health care is well-understood by those 'in the know’ – but do the general public understand this? And when it comes to investing in public health measures, which interventions do the public favour?

One of the questions in a recent British Social Attitudes survey is particularly pertinent to these questions. The survey asked members of the public to imagine they were responsible for improving health in their local area, and had a limited budget (of 40 ‘counters’) to spend on four public health improvement measures – investment in housing, clamping down on underage alcohol and tobacco sales, the provision of leisure centres and parks, and discounts for healthy foods.

On the whole, people tended to share their budgets fairly equally (see figure 1), with around 40 per cent of all respondents dividing their budgets exactly equally between all four measures. 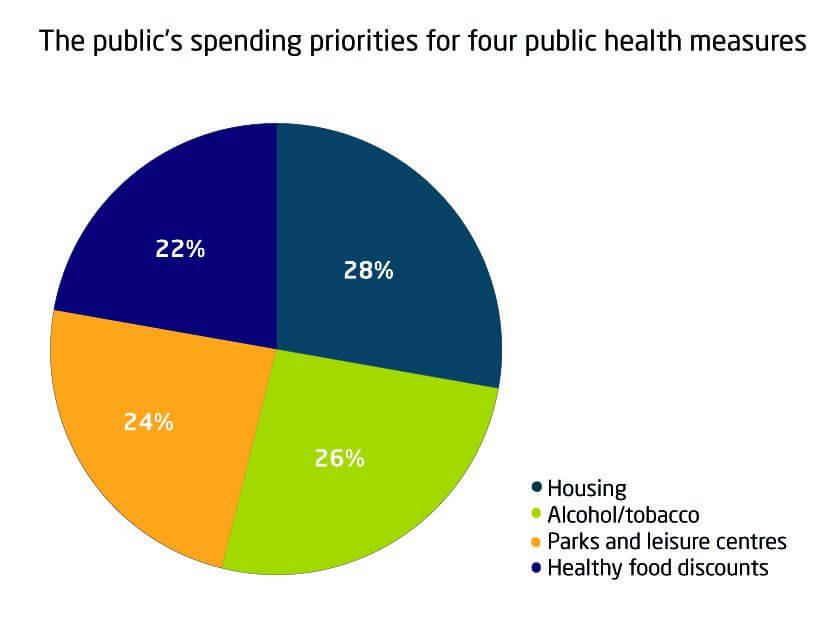 For the older generation, more familiar or traditional public health policies (such as alcohol and tobacco interventions) might be seen as more acceptable and worthwhile investments than actions that might seem to affect health less directly, such as spending on leisure centres, or measures that intervene in perceived aspects of personal choice, such as people’s diets. 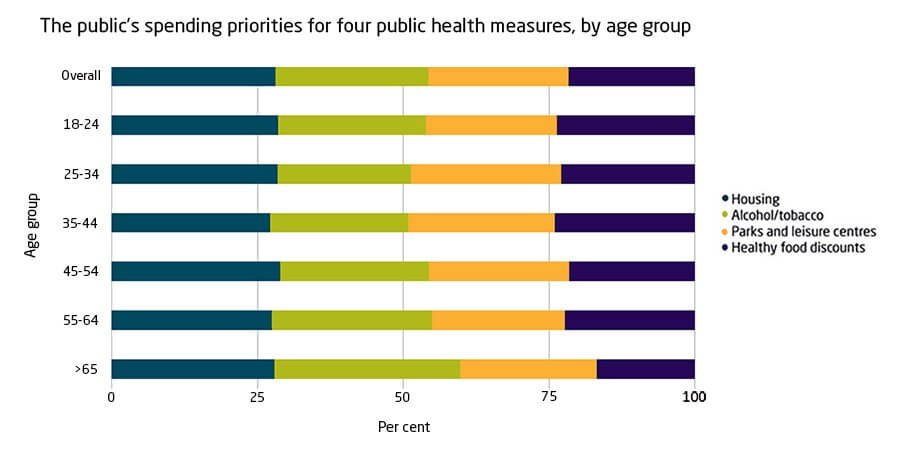 Other than a slightly increased tendency for women to split their hypothetical budget equally between all the public health interventions, there was little difference between men and women (see figure 3). Younger men (aged 25–34) however, apportioned more of their budget to parks and leisure centres (31 per cent compared to 24 per cent for all respondents) and less to alcohol and tobacco interventions (20 per cent compared to 26 per cent overall).

Perhaps surprisingly given the long-standing debate around government intervention versus personal freedom, and differing opinions regarding the extent to which governments should intervene, breakdowns by political affiliation didn’t show any notable differences in priorities.

It seems that the public may find it hard to prioritise between policies that could improve health. This might suggest a lack of knowledge about the different impacts of each measure, leaving little basis on which to discriminate between measures, or perhaps a desire just to be ‘fair’ in allocating resources.

It is clear that local politicians and public health officers need to be better at communicating successful public health interventions to the public. Implementing policies that the public don’t understand or support will limit success and sustainability.

Our latest infographics, produced jointly with the Local Government Association, seek to support this education process, laying out key facts about population health, the drivers for improving health and the case for public health interventions.

A key intervention should be community engagement. Many people do not realise there are local services available on their doorstep that can improve their health. Our website http://www.useyourcommunity.com is a database of local community organisations that people can access to find their local services and activities. Public Health could perhaps consider a wider need to actually engage and connect people to their local organisations.

Anna Charles sat down with Professor Kevin Fenton to learn more about the findings of Public Health England's review of disparities in risks and outcomes of Covid-19, his career journey, and his hopes for health and wellbeing in London.
Blog

The future of public health: many questions still to be answered

David Buck highlights the key questions surrounding the reorganisation of the public health system in England, from who holds responsibility to the relationship with local systems.
Blog

Nicholas Timmins reflects on the timing of the government’s decision to restructure England’s public health services and considers what is needed to make the new national Institute of Health Protection successful.
Long read