As we approach an election period when funding for hospitals will be a major issue, it’s interesting to reflect on how the great London hospitals were established and funded before the NHS was founded.

For example, in 1922, Viscount Cave’s Committee report recommended ‘moderate and continuous contributions from all classes of the community’, including ‘weekly contributions out of wages’ that would be supplemented by employers. Cave’s report also recommended tax relief on these voluntary contributions. From this recommendation the Hospital Saving Association was established in 1922, and in its first year thousands of employees contributed 3 pence per week from their wages.

Personal contributions were just one way of raising funds for the voluntary hospitals. In the physical archive of the Fund’s historical collection, held at the London Metropolitan Archives, we discovered a series of postage stamps that had been produced by The King’s Fund as part of ‘The Hospitals of London Combined Appeal’. They are a beautiful set, dating from 1897-1922, with each stamp depicting the crest of one of the London hospitals supported by the Fund. 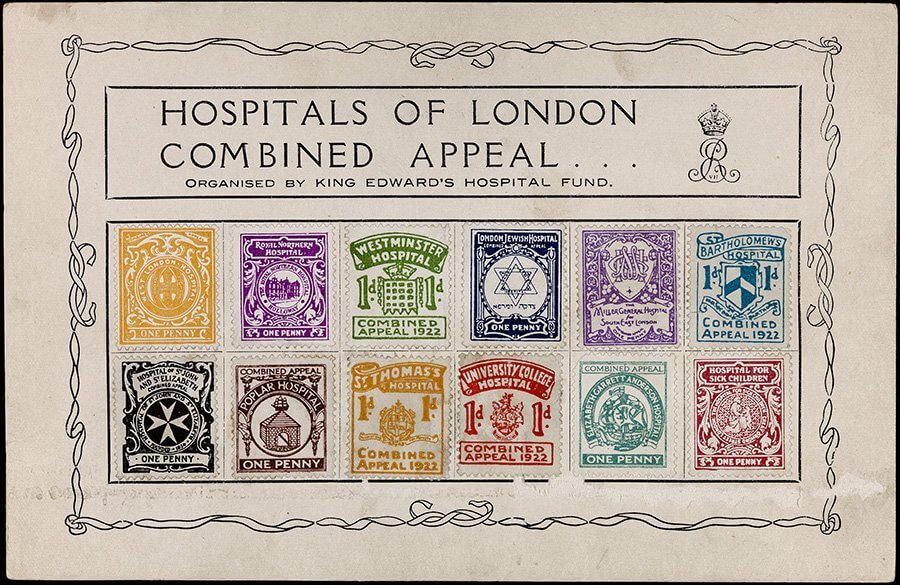 It was only when digitising our annual reports from the 1920s that we found out about the history of the stamps. The Annual Report for 1922 (see pages 44–53), which also refers to the recommendations of the Cave Committee report, includes the final report of the Hospitals of London Combined Appeal. This states that the stamps were sold by London schoolchildren as one of a series of fundraising activities: ‘more than 3,000,000 stamps, bearing the arms and badges of twenty-five hospitals were sold in L.C.C. [London County Council] and other schools, producing approximately £15,000 (around £640,335 today)’.

This was just one year’s takings; the Annual Report also shows the cumulative takings from the stamp appeal over the 25 years– an impressive £34,883 (about £1,489,120 today).

The range of fundraising activities during the appeal was extremely broad, overseen by a committee including the Lord Mayor of London and the Governor of the Bank of England. They included a ‘Save Your Hospitals’ poster competition, a direct appeal to national banks, a national press release written by the King, a ‘children’s choral festival’ at the Royal Albert Hall, ‘a sale of Christmas dainties at Devonshire House’, and numerous local fetes and pageants across the London boroughs. 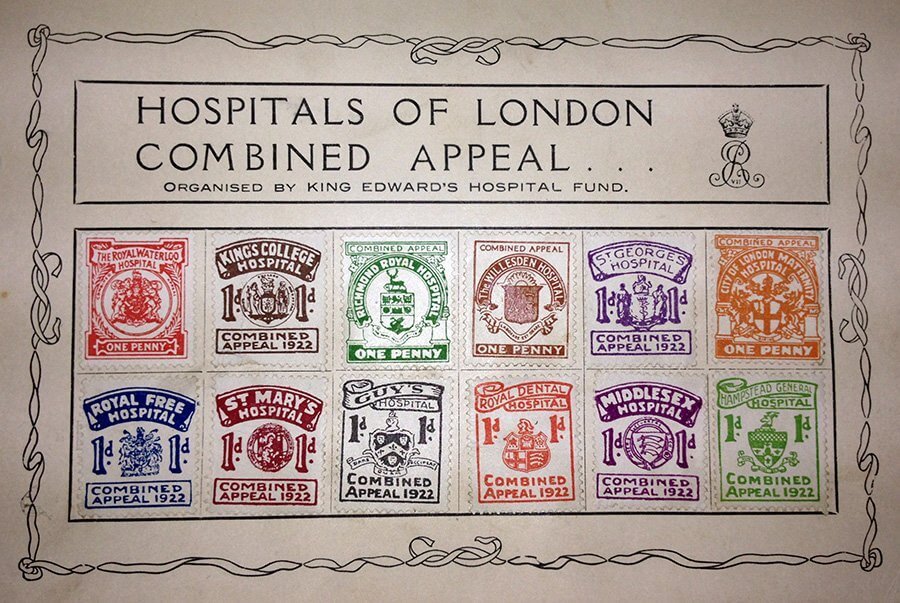 The story behind the stamps is just one of many fascinating things we discovered in the digitisation process. We’re delighted to be launching The King’s Fund digital archive, a unique collection of our publications from 1898 to the present day. We hope it will shed light on the history of health and social care; preserve the academic and corporate memory of the Fund; illuminate the philanthropic and charitable support offered to London hospitals before the inception of the NHS; and act as a valuable resource for those researching health policy and management by providing full-text online access from anywhere in the world. We encourage you to explore it for yourselves at http://archive.kingsfund.org.uk/.

If you have any questions please email the Information and Knowledge Services (IKS) team on enquiry@kingsfund.org.uk