Nick Clegg used his party conference speech earlier this month to highlight ‘the second class status given to mental health in the NHS’. On the same day, the government and NHS England announced new waiting times standards as part of the drive to put mental health care on an equal footing with the rest of the system. This is the first time mental health providers have been subject to explicit expectations around waiting times – something they may find is a mixed blessing.

Access to care is a longstanding problem in mental health, and the emphasis that is being placed on improving this is certainly welcome. Recently, for example, the work of the ‘We need to talk’ coalition has highlighted both the extent of geographical variation in waiting times for psychological therapy and the very real impact that this has on people’s lives.

It’s useful to know what the public think of the issue of waiting for mental health care. As part of the 2013 British Social Attitudes Survey, a nationally representative sample of more than a thousand people were asked how long they thought it would be reasonable to wait for treatment of depression after being referred by a GP.

The answers to this question are revealing and suggest that public expectations exceed current policy ambitions. 69 per cent answered that they would expect to be seen within two weeks, and 93 per cent thought a maximum wait of 30 days would be reasonable – considerably shorter than the 6 and 18 week standards being introduced for psychological therapies. Comparing this to other conditions, most people were prepared to accept a slightly longer wait for a referral for a ‘serious back problem that was stopping you from doing the things you normally do’, and longer still for a hip operation (see figure 1).

Figure 1: How long is it reasonable to have to wait? 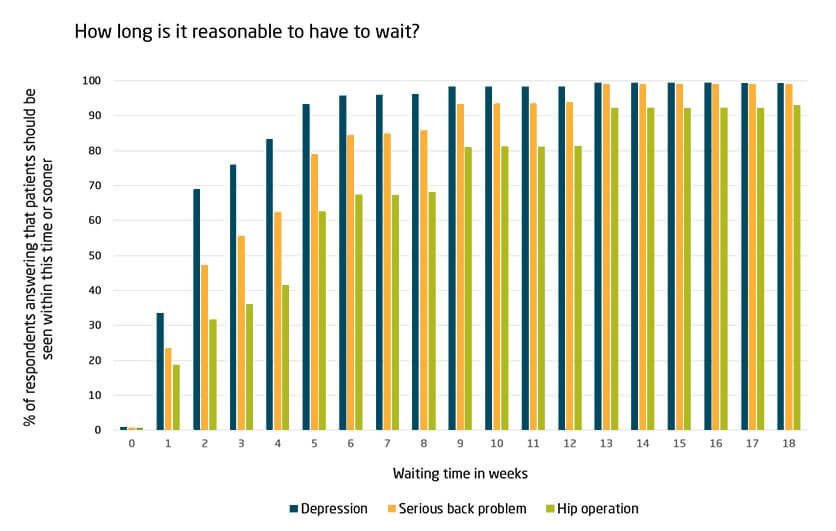 These results illustrate the value we place on our mental wellbeing and show that the public does care about waiting times in mental health. The question is whether waiting times standards will be effective in tackling the problem.

The new standards do not apply universally across the mental health system, but focus on waits for two specific types of service:

As a place to start, this focus makes sense. These two services represent areas where the evidence is strong, and where there has already been a focus on improving access. However, we need to know much more about waiting times in the rest of the system before going further. Poor-quality data is the rock on which efforts to improve mental health care often run aground. The fact is that we do not currently know enough about how long people are waiting for different forms of care, and where the biggest bottlenecks in the system are. Are there still greater access issues elsewhere, for example, in community mental health teams, or in the form of delays between first assessment and treatment? And does the selective focus on waits in two parts of the system risk skewing priorities and letting waits rise elsewhere?

The introduction of waiting times targets for hospital care in the rest of the NHS was the culmination of an enormous amount of analysis, which involved strengthening data systems, mapping patient pathways, establishing a detailed set of measurement rules, and identifying where along the patient journey the longest and most problematic waits were taking place. The same will be needed in mental health if the ambition is to introduce more comprehensive standards in future.

For mental health providers, the new standards are significant in that they introduce a form of accountability that is now common practice in the rest of the NHS, but which has not previously been applied to mental health. This is an important step on the way towards having comparable accountability mechanisms across mental and physical health.

The history of the ‘war on waiting’ in the NHS shows that impressive achievements can be made with sustained effort, but also that targets can have unintended effects and can drive perverse behaviours among those being measured. As standards are introduced in mental health, it will be important to keep their effects under review to understand what impact they are having, and whether they are achieving what we desperately need them to.

There is a disconnect between demand for talking therapy and supply. There are over 5 million depressed patients in England taking 60 million monthly prescriptions for antidepressants against NICE guidelines because waiting times for talking therapy is too long (more than 6 months in Sussex.) The remedy is to open up the market so that GPs can prescribe NICE recommended Mindfulness Based Cognitive Therapy 8 week courses as easily as Prozac, and facilitators can be paid to run them for say £400 per patient who satisfactorily completes a course. For details, see papers on section 9 or www,reginaldkapp.org and www.sectco.org, and www.bhma.org
The question arguably has a simply answer - 'not very long where at all possible'. However a caveat must also include something about priority, urgency, seriousness and risk. In my time as senior MH practitioner leading work as part of a MDT at our wkly referral allocation meeting with 15-20 referrals from an semi urban population of c100,000 people we would regard 1/3 of those not needing even an assessment - better redirecting and offering signposting and support to them and their referrer (most often GP), a 1/3 needing an assessment - mostly offering reassurance and simple interventions and another 1/3 needing to be offered some ongoing - mostly time limited support eg a CBT module and / or specific advice on medication etc.. We also had, of course, a rapid access on call service and would also priorities those with florrid psychotic symptoms So really early intervention support I am still of a view has its place and that triage and initial assessment capability should form part of the answer to another related question 'what does good mental health commissioning look like?'
Yes, it is good to make the right therapies accessible sooner, and the wait now is too long. But why mess it up with the application of targets? Show me a target and I'll show you a perverse outcome.
Now what would be really illuminating, and revolutionary, and inspiring, would be to measure and understand demand. Then the service could be designed and tailored to each patient, and the waiting time would be measured and made as fast as possible, The expense of monitoring targets and avoiding punishment would all be saved, and the energy would go into improving the service. How good that would be.
Personal experience:

Useful as it is to be aware of rights and opportunities to engage with the systems and processes to get the required treatment - I found that this was actually the last thing I had any energy / inclination for.

This needs to be addressed - if I had taken 2 "sets" of medication treatment I don't think I would have had to take a break and go back to get more medication?

The time is right to radically reform Mental Health. We all know budgets are squeezed, carers are on the 'front line' why are we hardly mentioned at 'high profile' Conferences. In fact had itnot been for me raising the Carers issue at the 'Integrated Summit' at the KingsFund we would have been ignored altogether.

I know the system well, there is no understanding by those individuals attempting to implement integrations, what this actually means. It is not just about the Local Authorities, Healthcare NHS Trusts, and the Clinical Commissioning Groups. It is much wider than just the three organisations I have just mentioned. Housing, DWP, are two other organisations crucial involvement in 'Integration'.

The other problems facing Carers and the Patient is the non comformity of the three agencies across the UK, in implementing the Care Act 2014, some agencies are excellent, but others ignore The Laws and Legislation, particularly around the area of Section 117 free after care, due to tight budgets.

I would suggest Carers can play a lead role in'integration'. How will this work in the interest of the patient and carer.

1. A shorthand publication on the rights of carers and patients.

2. The above will contain all the information you require, regarding your rights under the Law, Human Rights Act Equality Act 2010 United Nations Conventions, the Care Act 2014, 'Risk and Care' Assesment. Who to contact in emergency.

3 The Carer in some circumstances are best placed to become the Care Manager Co-Ordinator.

4 Where the Care Manager Co-Ordinator is not the Carer, that individual will be responsible for implementing the patients rights under the Law. The Carer will be given a copy of the CPA with a'booklet' informing them of their rights and that of their relative. (Including information). Emergency Crisis contract details will be included, and available 24/7.

‘The targets in this plan look ambitious, especially as the disruption caused by Covid-19 makes it hard to predict how many patients will need care in the coming months,' say Richard Murray, Chief Executive of The King's Fund.
Blog

David Buck and Toby Lewis consider the opportunities of NHS England’s new ‘Core20plus5’ approach to tackling health inequalities, and reflect on how the NHS begins to adapt its role and work more strongly with others to tackle the root causes as well as symptoms.
Press release

‘GPs report that they are working harder than ever, yet patients are finding it difficult to get an appointment – it is clear that something needs to be done,' says Beccy Baird, Senior Fellow at The King's Fund.