The NHS featured heavily at all three major party conferences over the past few weeks. How could it not; despite a ring-fenced budget, it is increasingly showing signs of financial strain. But what has ‘ring-fenced’ meant in practice for the NHS? And what are the three main political parties’ promises, pledges and aspirations for NHS spending in future?

The latest Department of Health accounts for the NHS in England, published in June, now provide a full picture of the government’s NHS spending outturns and plans between 2010/11 and 2015/16. Figure 1 shows that the NHS will have spent an extra £16.7 billion cash over the six years from 2010/11 to 2015/16. Allowing for general inflation in the economy reduces this to a real-terms increase of £4.8 billion (figure 2) – a real rise of 4.4 per cent over six years – or an average of 0.7 per cent per year for six years. 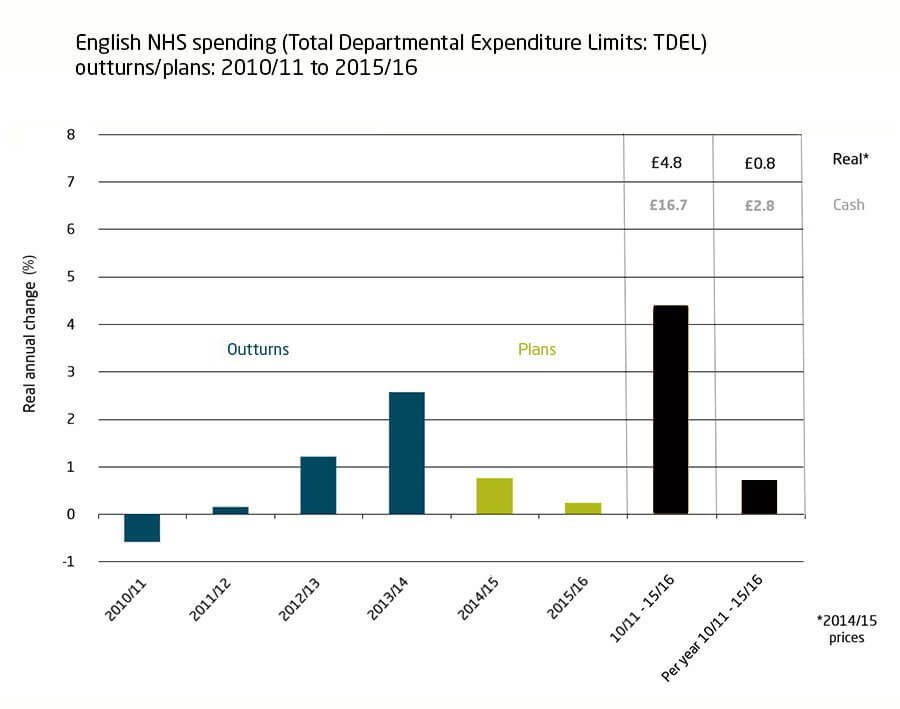 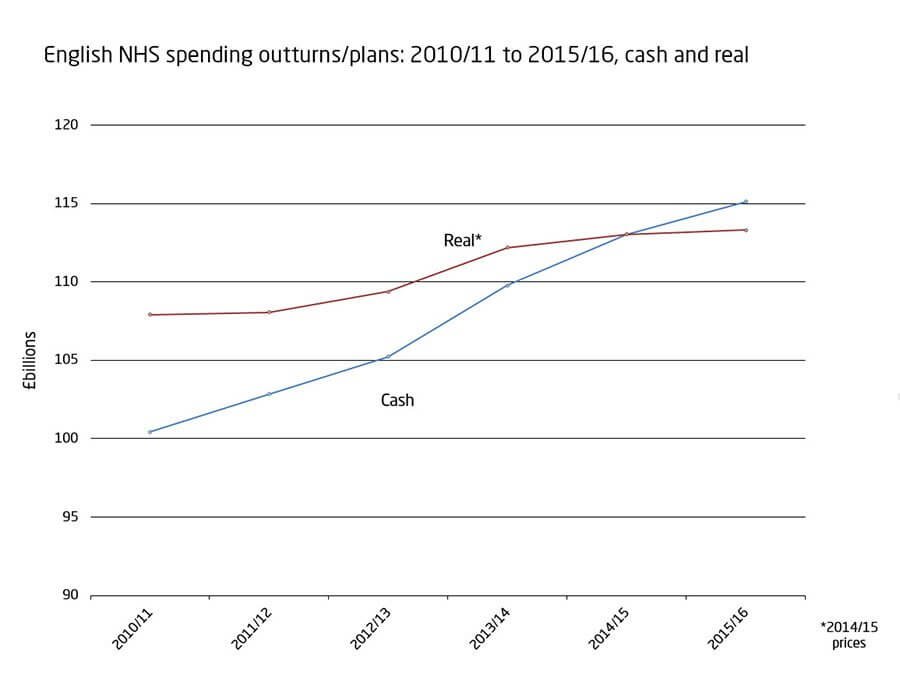 Real spending increases have not been particularly stable from year to year – indeed, in 2010/11, there was a real reduction. This is in part the result of changes in the actual rate of inflation compared with forecasts. In fact, at the time of the 2010 spending round, which set plans for NHS spending to 2014/15, the expectation was that spending would increase on average by 0.1 per cent per year.

But with an extended recession and lower than expected inflation rates, the real value of the planned cash increases turned out to be higher – accounting for an additional 0.6 per cent per year on top of the planned rise of 0.1 per cent.

What these top-level figures do not tell us is what the NHS spent its budget on. It is worth noting that since 2011/12 between £0.6 billion and over £1 billion per year has been transferred to local authorities. The effect of this on NHS spending is relatively small, mostly affecting the change in spending between 2010/11 and 2011/12 when the transfers began. However, with the introduction of the Better Care Fund next year, the amount of money earmarked for joint social and health care activities is significant at just under £4 billion in 2015/16. This will mean an as yet unquantified opportunity cost for the NHS, in effect reducing health spending.

Taking a longer historical perspective, as figure 3 shows, the average real annual increase in spending for the current administration represents the lowest amount since the 1950s. 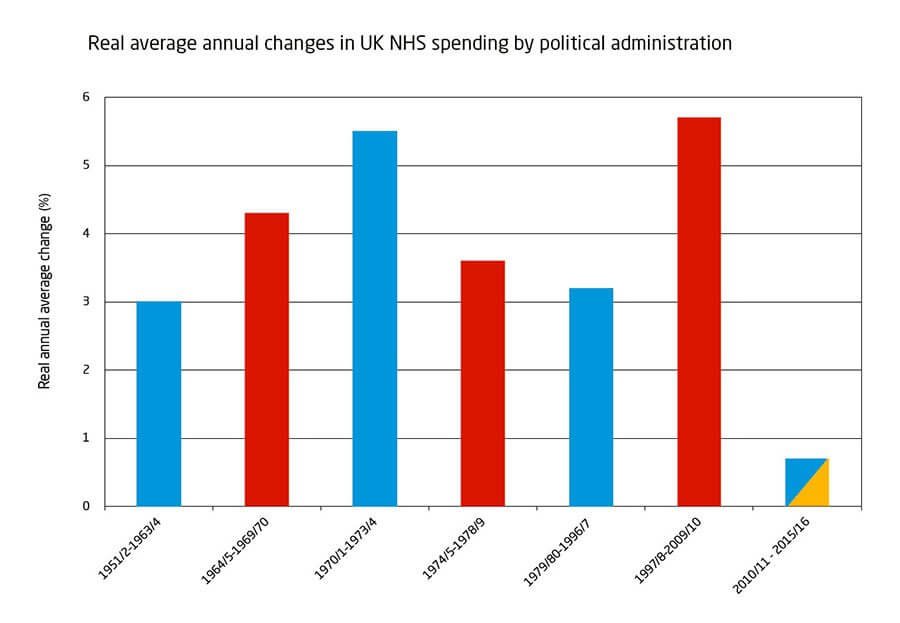 So much for the past, what about the future? As our quarterly monitoring report surveys have shown, the relentlessness of the challenge to make ends meet is taking its toll. Monitor reports a sharp downturn in performance in the first quarter of this year, both financially and in terms of key targets on waiting times. The Trust Development Authority reports similar financial and performance problems. So what is the politicians’ response?

At the Labour Party conference in Manchester, Ed Miliband promised more funding for the NHS – £2.5 billion to be raised from new taxes and to be spent on more doctors and nurses. It later emerged that this additional funding will not be available in full until possibly 2017/18 after legislation is enacted on the new tax sources. Plans for subsequent years (and, indeed, the full extent of plans for next year) are yet to be revealed.

In Birmingham, while not quantifying his promise, David Cameron pledged that the Conservatives would ‘...protect the NHS budget and continue to invest more’. However, if ‘protection’ means the same as it has for the past five years this would be close to NHS England’s most dismal planning projection for NHS funding, which could see spending cut as a proportion of GDP from around 7.5 per cent now to just over 6 per cent in 2020/21.

And finally, in Glasgow this week, the Liberal Democrats promised real increases of £1 billion each year until 2017/18, followed by further real increases once the deficit has been eradicated and debt is falling.

Although we don’t know when the deficit will actually be eradicated, the Liberal Democrats’ promise on NHS funding seems clearest – essentially a real increase of 0.9 per cent per year from 2015/16 to 2017/18, with funding beyond this date conditional on eradicating the deficit. For Labour and the Conservatives, the promises made at party conferences amount (at least) to meeting next year’s planned increase of 0.2 per cent in real terms and thereafter further real increases as yet unspecified.

In the absence of an unexpected acceleration in economic growth, and regardless of the colour of the next government, the NHS should expect real increases to 2017/18 of little more than the average annual real increase since 2010/11 of between 0.7 per cent and 0.8 per cent.

This is less than encouraging news given an estimated need for annual real increases of around 4 per cent from next year to 2020/21 to meet the £30 billion funding gap estimated by NHS England. Even assuming a (somewhat optimistic) productivity gain of 2 per cent a year over the next few years, all parties’ commitments fall short on the remaining 2 per cent required.

Our priorities for the next government

With the general election coming at a pivotal time for health and social care, we set out our view of the key challenges and priorities for the next government.

I am amazed that someone can write on NHS finances and not talk about the Nicholson Challenge. This £20 billion drive to take savings out the NHS in savings and reinvest them in new services have been driving planning for the last five years and explains how there can be consistent cutting of existing services whilst the main budget is largely protected.
It is such a shame that we have to use Spending as a proxy for outcomes achieved. Quantifiable outcomes would be much more motivational.