Trends in referrals and activity over the past six years reflect the success of the English NHS hospital sector. But as our latest quarterly monitoring report highlights, finance directors are feeling very pessimistic about the next twelve months.

Demand – as measured by total referrals – fluctuates from month to month, but the annual trend shows an increase between 2008 and 2014 of 4.2 per cent. Despite a squeeze on overall NHS funding from 2010/11 onwards – and even tighter pressure on the secondary care sector in particular – between 2008 and 2014, hospitals in England have seen extra referrals in outpatients (up by 3.1 per cent each year) and in elective and non-elective admissions (increasing by 2.8 per cent and 1.6 per cent each year respectively) (see figure 1).

While not reported on a monthly basis (and so not included in the chart below), follow-up outpatient attendances and total A&E attendances have also increased – by around 3.2 per cent and 2.2 per cent a year on average. 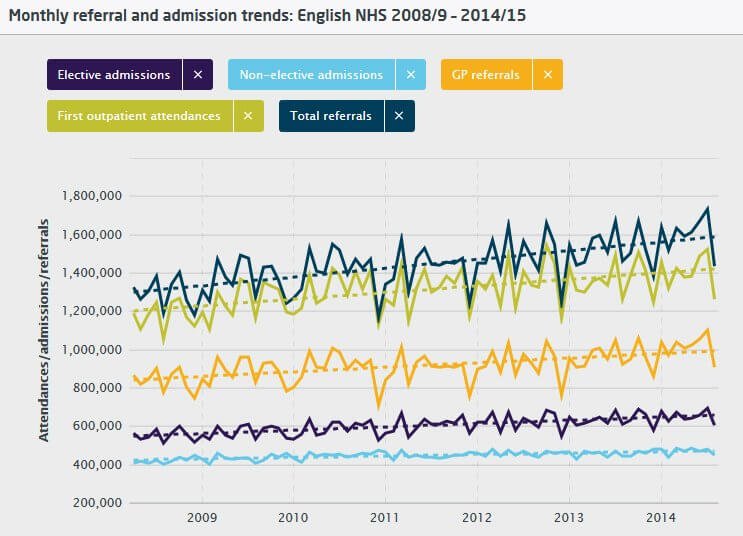 Hospital workloads are increasing on all fronts. One reason for this is simply that the population has grown over the past six years. Between 2008 and 2014 the population has increased by around 2.2 million people – an average annual increase of 0.7 per cent.

More people are living longer too. For example, since 2008, the number of people aged over 85 has increased by nearly a fifth, which of course has implications for demands on the NHS. Older age groups cost more to the NHS, and when we weight change in population in each age group by the cost to the NHS of each group we can get a more accurate picture of the impact of population change on the NHS. When looked at this way we get an adjusted population change of around 1.1 per cent a year.

So the good news is that, despite a squeeze on funding, hospitals have managed to do more, with activity keeping pace with demographic change. However, there is a cloud to this silver lining. Given these trends and future population projections, demographic pressures will not only continue, but will do so at a slightly increased annual rate than previously.

But these trends show something else is going on. While demographic pressures may be increasing at around 1 per cent or so each year, referrals to hospitals in England have been accelerating at over 4 per cent, outpatients at around 3 per cent, elective inpatients at just under 3 per cent and so on. As other work has shown, population change is clearly just one of the factors driving health care activity.

With current funding getting even tighter next year, workload trends increasing, and with plans in NHS England’s five year forward view assuming a continuation of the last five years’ productivity goals, the scale of the transformation task for the NHS – and in particular its secondary care sector – is clear.

Some interesting stuff but also perplexing. In the first paragraph you seem to imply that funding for secondary care has been particularly hit recently,but not stated compared to what. Also we have no figures her that give any inclining of efficiency. In my experience secondary care is far less efficient and refers far more ptarmigan back to primary care for onward referral. A consequence of the funding mechanism and increasing specialisation of the secondary care sector. Inflation is not necessarily a sign of this sector's success.
Thanks for your comment James.
Trusts have been hit with real reductions in the tariff over recent years. So, given that and given population change, 'success' in terms of meeting increased demands while under pressure financially. Agree that there are other measures of performance (eg efficiency) that we would also be interested in. However, my closing point is that trends show just how hard it will be to carry out the sort of 'transformation' the FYFV suggests will be needed as money remains tight for another 5 years.
it would be more appropriate to balance comments about older people "costing more", with a recognition that older people have contributed more through their working lives. And with rates of employment and entrepreneurship increasing in over 50's they will continue to make an even greater contribution to the NHS. Can you adopt a more balanced analysis please. We need to challenge that older people are going to bring the NHS to its knees. They are not!
The demands of patients and relatives are increasing! Any front line nurse (not arm chair nurses or analysts) will know there are increasingly unreasonable demands on the service brought about by labour and conservative governments raising expectations which cannot be delivered in front line clinical practice.
More activity/contacts/referrals/admissions:

Through increased fragmentation of care;
duplication of effort through skill mix leading to 3 consultations instead of 1 (eg nhs111/walkin...ooh....gp or nhs111/wic to a/e when just gp needed )
teamwork overlap or gaps in the commissioned care people fall thro;
readmission of rushed discharges;
coding of events uprating figures ( including discharge letter being entered on admission for elective procedures then not changed when it doesn't occur
PbR
patients shopping around and expectations

The number of NHS hospital beds in England has more than halved over the past 30 years. This briefing examines the data on hospital beds, explores the drivers underpinning the changes observed and considers whether STPs’ proposed bed reductions are realistic.
Video

Matthew Lewis, Visiting Fellow at The King’s Fund, speaks at our 2018 annual conference. Hear learning from our report 'Approaches to better value: improving quality and cost' where we heard from staff at three NHS acute hospital trusts.
Blog

Leo Ewbank asks whether sustainability and transformation plan proposals to reduce the number of hospital beds are realistic.
Blog

An insight into frontline clinical care in acute hospitals

Having spent time shadowing frontline physicians in acute hospitals, Chris Ham and Don Berwick set out the challenges they observed and talk about how the Fund is working with others to develop an agenda for improvements.