One year ago today, clinical commissioning groups (CCGs) formally took on their statutory responsibility for £65 billion of the NHS budget. And just over two years ago, The King’s Fund and Nuffield Trust began its joint research programme following the evolution of clinical commissioning in six CCGs. We’re particularly interested in finding out how these organisations are supporting improvement in the quality of general practice.

The engagement, interest and buy-in of GPs is essential to the success of CCGs. CCGs are different to the primary care trusts that went before them because they are designed as membership organisations in which GPs are given a genuine opportunity to influence decision-making about local health service provision. NHS England’s recent Call to Action on improving general practice also pointed to CCGs having a valuable opportunity to use their clinical leadership skills and relationships with member practices to help ‘transform primary care’.

Our first year findings highlighted a sense of goodwill and optimism about GP-led commissioning, and almost three-quarters of survey respondents felt engaged in the work of their CCG. But it was also clear there was a limited window of opportunity to harness and build on that level of enthusiasm.

So how do individuals in CCGs feel about engagement one year on?

The results of our second survey are published today and tell us that:

How engaged do you feel in the work of the CCG? 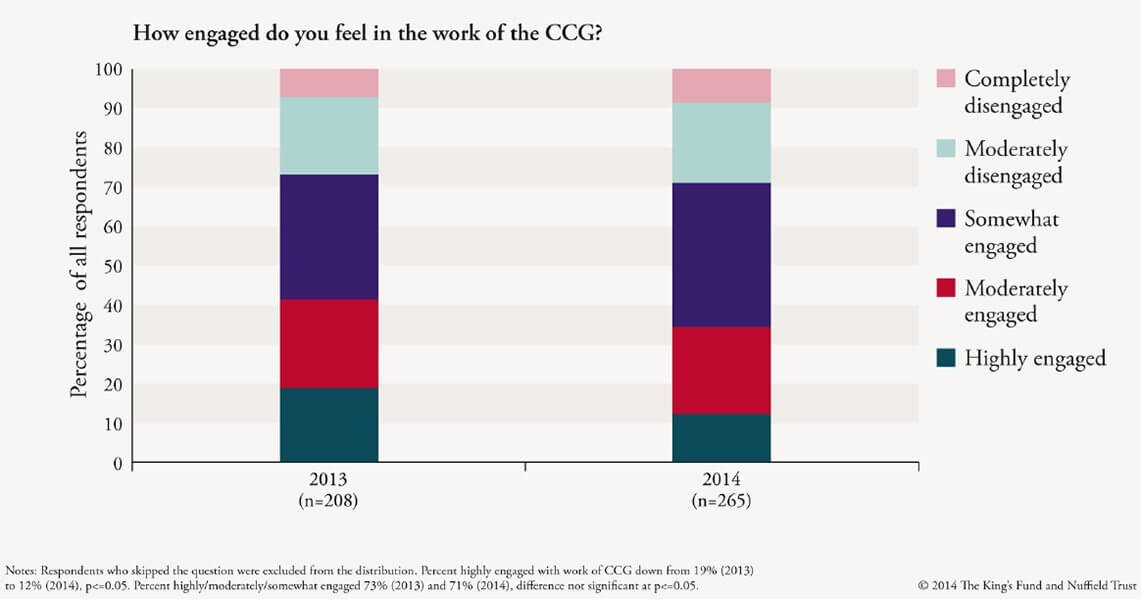 Influence over the work of the CCG/PCT 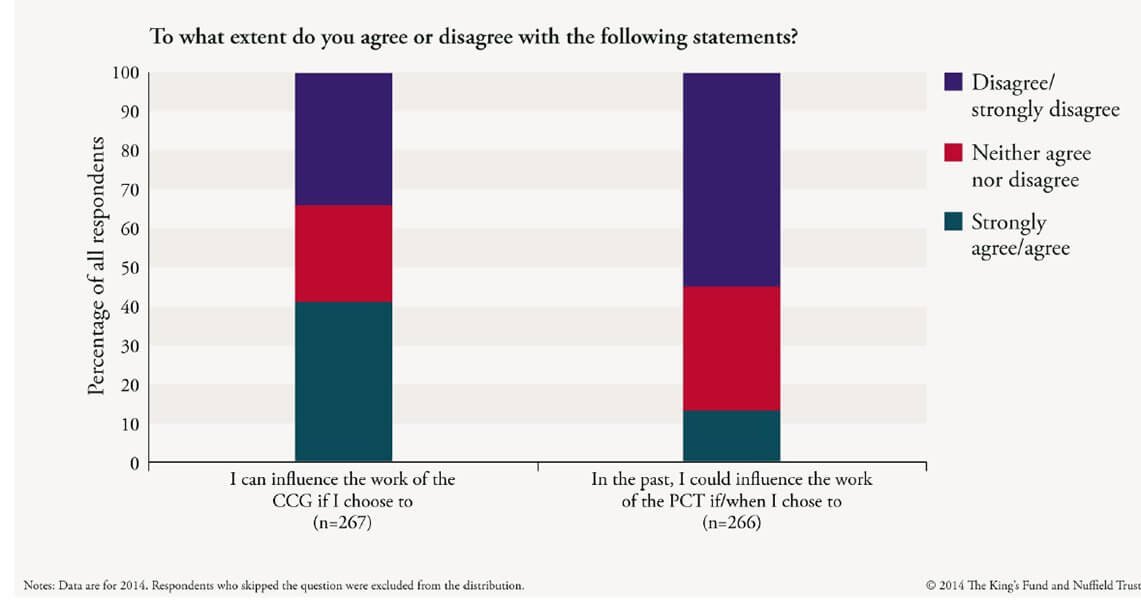 Less than half of the respondents felt they could influence the work of the CCG if they chose to. Realistically, we know it won’t be possible for all member GPs take on active roles in the CCG, but it is vital to create a culture that encourages and facilitates GPs’ involvement in commissioning.

One CCG chief executive said to me recently that CCGs are at a ‘tipping point’ for engagement; a concerted effort could be made to increase engagement, or engagement could tail off due to a range of factors, including lack of time, dissatisfaction with payment and working conditions, difficulty in changing entrenched behaviours, mergers of CCGs and whether the encouragement to work in a federated model is welcomed by those who are used to working as independent contractors.

CCG leaders could keep up the momentum by giving GPs meaningful involvement in commissioning decisions and promoting CCG success stories of primary care projects that have improved the care of patients and made GPs’ working lives easier. They could also increase engagement by drawing younger GPs into the work of the group – something that is vital for the long-term sustainability of the organisations.

One year since they took on their statutory responsibility, CCGs have done well to maintain levels of engagement. This is a reason to be optimistic.

We will be exploring and reporting on how engagement evolves in our sample of CCGs over the next year and will publish a report based on what we have found so far in the autumn.

In the meantime, happy anniversary, CCGs.

Clinical commissioning groups – one year on

We worked with the Nuffield Trust to understand the development of CCGs and the challenges they face.
Report

The King's Fund and the Nuffield Trust are working together to assess the implementation and impact of CCGs. This first report provides an overview of developments through to March 2013.
Report

Health care commissioners will need to deliver a sustainable system in the face of the most challenging financial and organisational environment seen in decades. Here, we set out ten priorities for commissioners to help them drive forward the changes needed.
Press release

One year on, new commissioning groups are an improvement on their predecessors but do not reflect the views of members, say GPs

Less than half of GPs feel decisions made by clinical commissioning groups (CCGs), the doctor-led bodies created by the NHS reforms to hold local health budgets, reflect their views, suggests a survey by the Nuffield Trust and The King’s Fund.

What engagement? First it was talking at us, then it became being a member of a committee so commissioners could come and present and tick a box to say that they had engaged. Two years on, very little has improved. Where PCTs had engaged, there is more likelihood of engagement, but where there was little or no engagement before, there is still little or no engagement and complying with H&SC Act 2012.
Patients getting involved? God forbid! words chosen carefully. Our CCG does not know the meaning of the word. It's all about the Clinical leaders having power now. Have got to move from my GP, as he is Vice Chair and I cannot tell when he is doing things for my benefit or CCG saving money, my money by the way.

CCG's have a duty to 'engage with patients' although this is a matter of interpretation.
South Reading Patient Voice, with support from South Reading CCG, have been proactive in this respect. Over the past year we have had monthly meetings with speakers explaining various topics relating to the Heath service.
For example 111, Community teams, PALS and the JSNA.
Patient groups cannot be an effective voice without understanding the system.
The plan for 2014/2015 is a joint steering group comprising members of South Reading CCG and Patient Voice with representatives from support groups (e.g. Carers, BME) and the Youth Cabinet.
The aim is to work together to hold up to four major public events a year to address health issues which are areas of concern in South Reading .
This is a very exciting pilot project with tremendous potential, working together and ensuring that patients are involved on an equal basis.
Watch for updates on progress!
I was a member of the West Hampshire CCG Participation and Communication Group. Suddenly in the middle of last year it ceased to function and despite enquiring about its continuing existence have heard nothing for the last 6 months. Is this typical of how CCGs operate.

Commissioning is the process by which health and care services are planned, purchased and monitored. Here we look at the commissioning process in more detail, the organisations involved and how it is changing.
Paid event

With collaboration and integrated care central to the long-term plan for the NHS, Ruth Robertson considers what the future holds for commissioning and commissioners.
Completed project

This project sought to support systems as their commissioning structures evolve by presenting evidence to inform decision-making.