The Chief Executive of the English NHS, Sir David Nicholson, recently called for politicians to be '…completely transparent about the consequences of the financial settlements…' for the NHS. His point was that, although politicians say the NHS has been protected financially, this is only relative to real cuts in other areas of government and, crucially, not in terms of the demands on health care.

The NHS is not alone. Across many OECD countries spending on health care has slowed dramatically in the past few years as governments have adjusted public spending in the wake of the impacts of the global financial crisis and ensuing recessions. Some countries have experienced real declines in spending, others have seen a slowdown in growth. Across the four UK countries spending decisions have varied too. As the Institute for Fiscal Studies has recently noted, health spending in Wales will fall by 8.6 per cent in real terms between 2010/11 and 2013/14. However, in England, health spend will have risen by slightly more than 4 per cent in real terms between 2009/10 and 2015/16. This is more than the government promised at the time of the 2010 Spending Round  – largely as a result of lower than expected inflation rates (a sliver of a silver lining to the recession cloud).

A particular issue over the past few years – and set to increase – is the fact that money may be allocated to one department but spent by another. This may make sense – it might be a more efficient way of doing things. It might also be a hangover from previous decisions. But there are grey areas too. Should spending on social care (from the health budget) be classified as health care spending or social care spending?

Piecing together the breaks in data, the overlaps in allocations and the spending these decisions cause is tedious. But scrutiny of recent Department of Health accounts for the English NHS, decisions in this year’s Spending Round, expenditure details on personal social services, and various NHS England board papers, has put a somewhat different slant on the headline figure for NHS spending in England.

Figure 1 shows various transfers from the English NHS budget to local government since 2009/10. The picture is complicated, not just because some transfers were originally allocated to the NHS and then moved completely out of the NHS budget (such as the personal social services grant), but also because it has not always been clear where responsibility lay historically for the provision of services (eg, for learning disabilities) for which money has been transferred. It’s also worth noting that from 2013/14, around £2.8 billion (included in the black bars in the figure) will be used to pay for public health staff transferred from the NHS to local government. 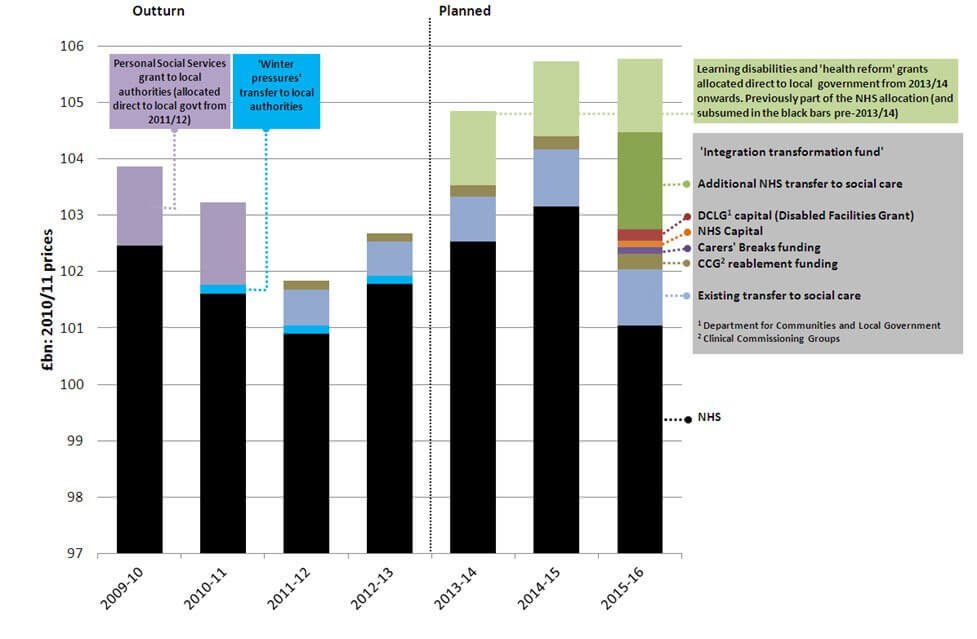 There's no doubt that, for transfers that have not also been linked specifically to transfers of responsibilities (such as the public health money), the additional resources have helped local government at a time when their budgets have been under severe pressure. It has also helped support social care spending which has been falling in real terms since 2010/11 (see figure 2). 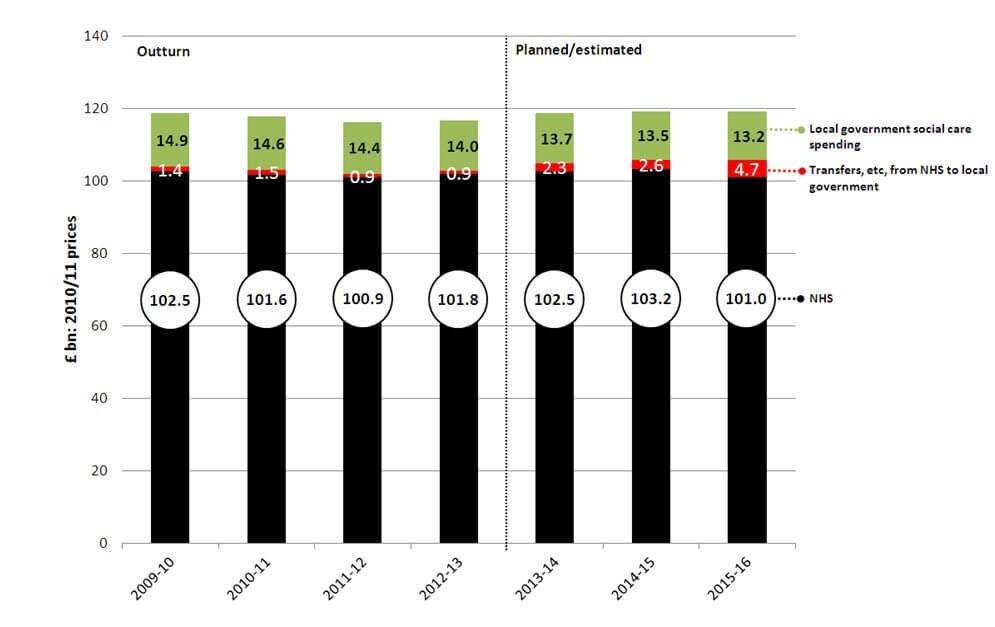 However, decisions taken in the 2013 Spending Round will mean that in 2015/16 around £3.8 billion (3.3 per cent of the entire NHS budget) will be transferred from the NHS to local government as part of the ringfenced ‘integration transformation fund’. This is equivalent to an average reduction in allocations to NHS purchasing organisations (clinical commissioning groups) of around £17 million.

As the name implies, the fund aims to help implement a more integrated approach to health and social care. This is surely a good thing. But as the Chief Finance Officer for NHS England, Paul Baumann, has noted, ‘Moving resources… into a pooled budget with the intention of providing social care and community-based services will require disinvestment in other services.’ Baumann’s point about the opportunity cost for the NHS of the integration fund transfers is confirmed by figure 3: a 2 per cent real cut in resources for health care in 2015/16 and a 1.4 per cent real cut over the whole period from 2009/10 to 2015/16.

Figure 3: Real annual changes in English NHS spending with and without transfers etc to local government: 2009/10–2015/16 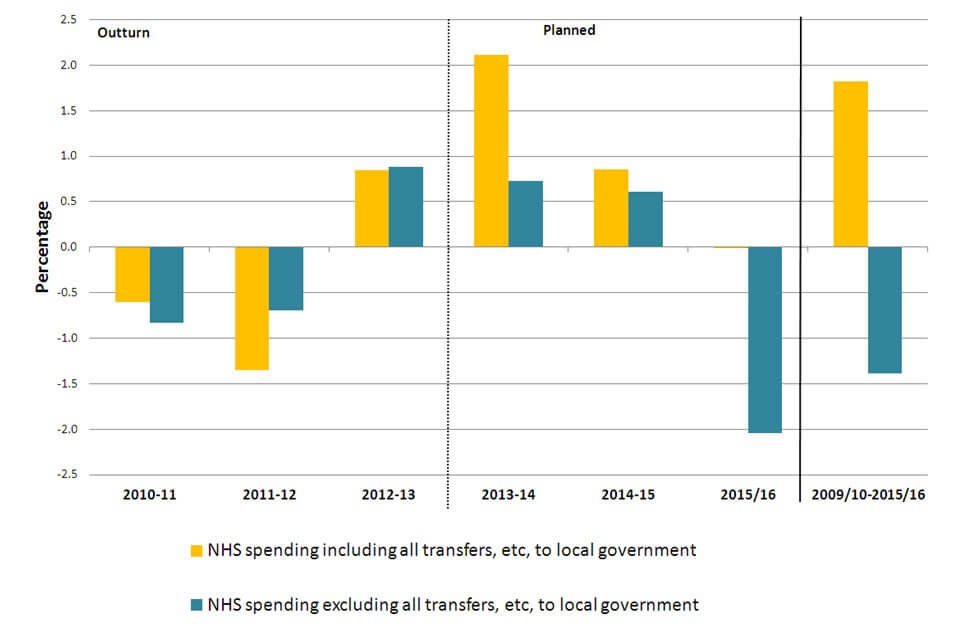 Much depends on how the transferred money is spent and what benefits this will bring to the NHS as well as social care. The jointly agreed plans that have to be in place by April next year will offer some early clues.

Tom Bell asks what is the expenditure by 3rd sector, charities etc on health.

Most of this 'expenditure' is not measured in fiat currency. It's voluntarily given and not valued by the state. If it were part of GDP it would be enormous and dwarf that generated by traditional 'wealth creators' such as industry, arms dealers and even prisons.

We have to move away from a world where everything is determined by £, $, Euros etc.

I challenge the Kings Fund to look at complementary currencies and their increasingly important role in delivering health and social care in a world that is economically stagnant and running out of fiat currency/legal tender and debt-ridden.
Might it also be useful to know what is being spent by other Third Sector and voluntary bodies around health; this would appear to be an increasingly large component of total health spend.

New NHS Digital data on the state of the NHS estate reveals the backlog maintenance cost has increased once again, so how should new capital funding be prioritised? Siva Anandaciva outlines the impact of the estate on patient care, and highlights four key issues for consideration.
Blog

In this first blog of the new year, Richard Murray outlines the key challenges and opportunities facing the health and care system in 2021.
Long read