Three years ago the coalition government’s first Spending Review promised to ‘ring fence’ the budget for the English NHS and to increase spending in real terms each year to 2014/15. So what has actually happened to NHS spending?

Figure 1 compares English NHS spending as announced in the 2010 Spending Review (at 2010/11 prices) with actual and planned NHS spending. The comparison is not straightforward for a number of reasons.

First, from 2011/12, around £2 billion a year was taken out of the NHS budget and transferred to local authorities and the Department for Communities and Local Government. This was in part to support people with learning disabilities and in part to promote joint working between councils and the NHS. Figure 1 adds these transfers back in to make the figures comparable. 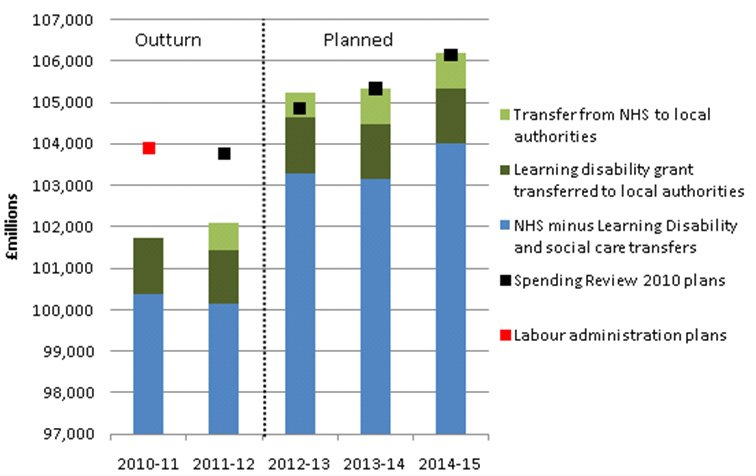 In 2010/11 (before the current Spending Review period), spending was £2.2 billion lower than planned by the previous government, in large part due to the Department surrendering a £1.9 billion underspend to the Treasury. Since then, while planned spending was in line with the 2010 Spending Review forecasts, figures for 2011/12 show an underspend of £1.7 billion; most of this – around £1.4 billion – was returned to the Treasury and the remainder rolled forward into the next year’s NHS budget.

Looking just at the remaining spending for the NHS (that is, minus transfers to local authorities) shown by the blue bars, spending will increase by around 3.6 per cent over the four years to 2014/15 (more generous than planned due to the smaller-than-forecast levels of inflation). However, in 2011/12 real spending reduced by 0.2 per cent and, in line with current plans and measures of inflation, will fall by 0.1 per cent in 2013/14. 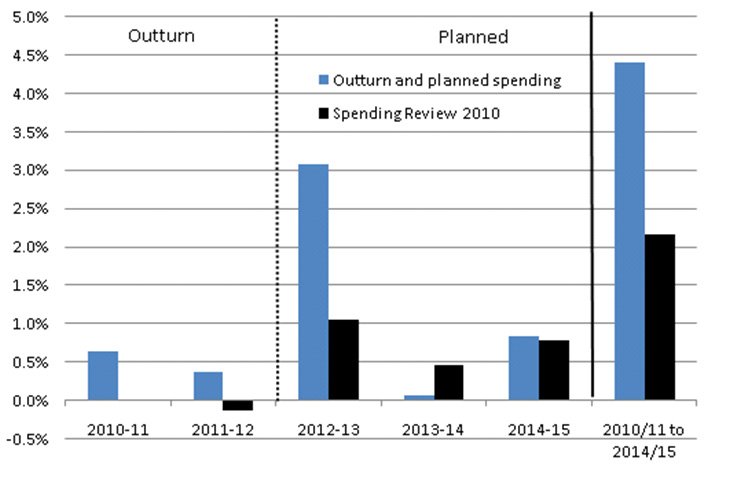 In December last year, the Chair of the UK Statistics Authority, Andrew Dilnot, chastised Jeremy Hunt for claiming that NHS spending had increased in real terms. So, does the latest data suggest the government is on course to meet its pledge for real increases in the English NHS budget every year to 2014/15? Well, on the face of it, yes – thanks perhaps to smaller increases in inflation than forecast. But government, not NHS, decisions to transfer budgets to local authorities, as well as to give ad hoc monies to support councils’ budgets in general – plus clawbacks by the Treasury – leave the NHS in England with a couple of years of small real reductions in spending. As ever, smoke and mirrors – in reality, as Dilnot pointed out, expenditure in real terms will change little over the Spending Review period.

These calculations will be even more complex following the announcement of the NHS allocations for 2015/16 in the latest Spending Review. As expected, the government’s pledge to protect the NHS budget is maintained – just; spending is planned to increase by 0.1 per cent in real terms (an amount easily within the margin for error of the inflation measure used to calculate the increase). Importantly, the amount transferred from the NHS to local authorities to provide a new ‘pooled budget’ for integrated care will increase significantly to around £3 billion.

For the managers, nurses and doctors on the front line, the nuances of fluctuations in the GDP deflator and which government department is in charge of which budget are less relevant. The fact is that there isn’t a lot of money around (for now), and the NHS in England (and in Scotland, Wales and Northern Ireland) faces a continuing battle to extract greater value from every health pound as demands and expectations grow.

Our response to the announcement of the Spending Review

Back in 2004 I attended the International Healthworkers Conference in Brighton and was delighted to hear the Kings Fund had been given the remit by the government to look at ways of turning the NHS from a sickness service into a Health service, this was also the theme of my presentation . A decade has passed and little has changed for two reasons: firstly, health promotion is not a significant part of a doctor's training that is primarily directed at pathology, diseases their diagnosis and treatment and advisors to the government are these same people and secondly the NHS is suffering from "bigness", it is the largest employer of workers second only to the Red Army, it has also become an organisation"beyond criticism" despite the fact that it's management is inefficient and if it were a commercial company would have failed years ago. The way forward is definitely not to throw more good money after bad, the current ly favoured political plan nor to cut frontline services.
The solution to this monster problem lies in two areas, firstly there is a critical need for a paradigm shift in healthcare from pathology orientation to health orientation and this is dar more than the simplistic approach currently taken of stop smoking, loose weight and exercise more. These are factors in the fundamentals of health but until the public are educated that their health is their responsibility and not that of the doctor there can be no hope. The second factor is the gross inefficiency of management of resources that comes from excessive organisational size, a similar problem was recognised and addressed by the international company Omron, the CEO outlined the solution in his book "The Eternal Venture Spirit" that should be compulsory reading for every manager in the NHS. I used to more as a Management Consultant in Hawker Siddeley Group when we found 20 % savings across the group through better O & M, this in a efficiency conscious commercial operation, so I suspect the potential efficiency gains in the NHS could be nearer 40% if better managed. This would release funds for frontline staff and transform the service with a lower percentage of our GDP being spent on the service. Are these ideas just too far from reality for consideration? I hope not!

and the extra cost of continually tendering out and trying to win/maintain contracts in this lovely free market style health service, plus the additional number of managers in the increasing number of organisations using the NHS logo, the increasing frequency that staff are moved to different organisations, plus the increasing legal costs......
It doesnt feel like thenhs budget has been protected from a front line perspective, where individual trusts are having to find savings in the millions each year, and no one has had a pay rise for three years.

How is 'wasted' nhs money taken into account when considering the balance sheet? I.e the money spent on continual reorganisations (mandated by government), legacy white elephant PFI deals (mandated by government), failed informatics (mandated by government), and all sorts of extra quangos, regulatory add-ons, networks of whatever flavour of the month?? I suspect that money available for actual service provision and front line care has gone down, particularly if you take account of new interventions and treatments that have had to be assumed within the envelope. Maybe that is why clinical morale is at an all time low. We can cope with austerity - it's just being blamed for the consequences of it that grates so much!

New NHS Digital data on the state of the NHS estate reveals the backlog maintenance cost has increased once again, so how should new capital funding be prioritised? Siva Anandaciva outlines the impact of the estate on patient care, and highlights four key issues for consideration.
Blog

In this first blog of the new year, Richard Murray outlines the key challenges and opportunities facing the health and care system in 2021.
Long read