To say the NHS is political is to state the obvious. The nature and origins of its birth, the way it is funded and the important place occupied by hospitals and clinical staff in local communities makes it inevitable that decisions about the NHS – from spending to the way it is organised – are political (with a small ‘p’).

But is it also political with a big ‘P’? Are the public’s views about the NHS – in particular their satisfaction with the NHS – shaped, influenced or, in some way, linked to support for or identification with political parties?

The latest results from the 2012 British Social Attitudes (BSA) survey for satisfaction with the NHS and its various services show that the sharp fall in the number of people very or quite satisfied with the NHS overall recorded between 2010 and 2011 (from 70 per cent to 58 per cent) stabilised in 2012. Although satisfaction rose slightly to 61 per cent, the rise was not statistically significant.

What has emerged over the past 30 years of the BSA survey is that the relationship between survey respondents’ political identification and the party in power is part of the reason satisfaction levels with the NHS change. As can be seen in Figure 1, when the Conservative Party were in power between 1983 and 1997, people who identified themselves as Conservative supporters were more satisfied with the NHS than either Labour or Liberal Democrat supporters.

Figure 1: Trends in satisfaction with the NHS by party identification 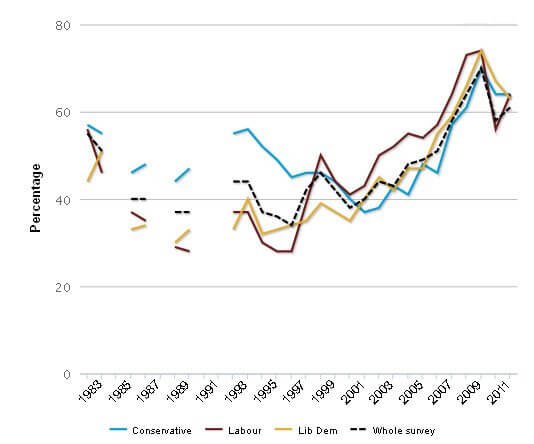 And conversely, from 1997 to 2010 when Labour were in power, positions reversed, with Labour supporters expressing greater satisfaction than either Conservative or Liberal Democrat supporters. The relationship becomes even clearer if we look at the gap between Labour and Conservative supporters’ satisfaction.

Figure 2: Labour minus Conservative supporters’ satisfaction with the NHS 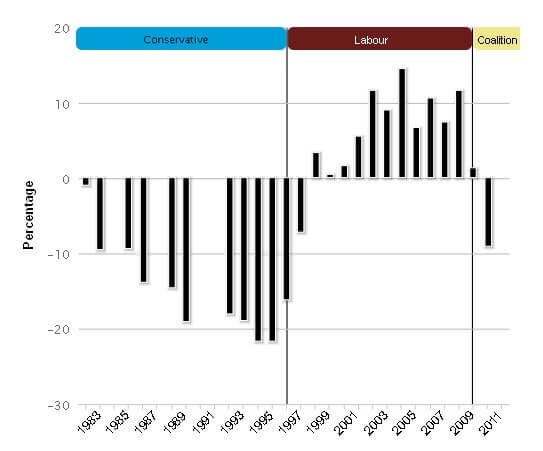 As Figure 2 shows, the reversing of satisfaction from one period of government to another is not instantaneous; there was a lag in 1997 as Labour supporters’ satisfaction levels increased to overtake Conservative supporters’. There was also a small lag following the 2010 general election, with the difference between Conservative and Labour supporters’ views shrinking in 2010 (note that the BSA survey fieldwork was conducted after the election in that year) and then reversing in 2011.

The latest results for 2012 are interesting as both Labour and Conservative (and Liberal Democrat) supporters were equally satisfied with the NHS overall (hence the difference in 2012 is zero, see Figure 2). It would seem that identification with a particular political party is associated with the gap in absolute levels of satisfaction. But is there a link with changes in satisfaction from year to year?

Figure 1 illustrates the similarities in the way satisfaction for all three main party supporters’ changes from year to year. Conservative, Labour and Liberal Democrat satisfaction levels have a tendency to rise and fall in line with each other from year to year. Although the correlation in the year to year changes is weaker post 1997, the correlation in the absolute levels of satisfaction remains strong. It is clear that following Labour’s first term in office from 1997, common (upward) trends in satisfaction started to emerge across all three main party supporters from around 2002 onwards.

For the three years of the coalition government, the links seen in earlier periods are more confused. Satisfaction levels fell for all three main party supporters in 2011. And then, in 2012, remained essentially flat for Liberal Democrat and Conservative supporters, while bouncing back slightly among Labour supporters.

Satisfaction with the NHS is, of course, influenced by many things, not just party politics and views about the government of the day and its policies. And, though part of the thrust of the government’s changes to the NHS, which come into force this week, is to increase the decision-making distance between politicians and the NHS, no one can legislate to distance the public’s political views and associations from their attitudes towards the NHS.

This blog also featured on the Health Service Journal website.

Public satisfaction with the NHS stabilises after record fall

Public satisfaction with the NHS stabilised last year after a record fall in 2011, according to British Social Attitudes survey data published by The King’s Fund.
Report

British Social Attitudes survey 2012: public satisfaction with the NHS and its services

The topline results and satisfaction trends relating to the NHS and health care issues from the British Social Attitudes survey 2012.