Pressures on accident and emergency (A&E) departments hit the headlines last week, with the Prime Minister and Leader of the Opposition trading statistics across the despatch box at Prime Minister’s Question Time. But what are the facts about A&E attendances? 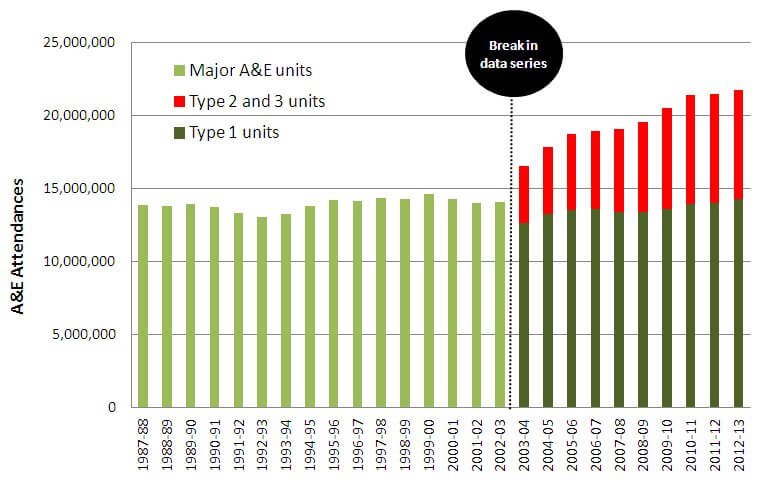 While the Secretary of State for Health, Jeremy Hunt, has suggested that changes to the GP contract around 2004 are to blame for the rise in A&E activity, the facts about accident and emergency workload statistics are not straightforward.

As Figure 1 also shows, in 2003/4 – when the large increase in attendances started – there was a change in the data series. Until 2003/4, statistics on A&E attendances included ‘major’ A&E units only. But around this time more, smaller units – including walk-in centres (WiCs) and minor injuries units (MIUs) – were introduced with the intention of diverting less serious emergency cases away from the larger, more expensive A&E departments, and the statistical collection was changed to record attendances separately for ‘type 1, 2 and 3’ units. Type 1 essentially reflecting major A&E units and types 2 and 3 defined as the smaller, walk-in and minor injuries units, together with specialist emergency departments.

While the NHS has experienced a phenomenal increase in accident and emergency workload over the past decade, over the past 30 months this increase has started to level off. Figure 2, for example, shows weekly attendances between November 2010 and April 2013 together with a trend line. The trend increase over the whole period is around 3.5 per cent – about 1.3 per cent per year. 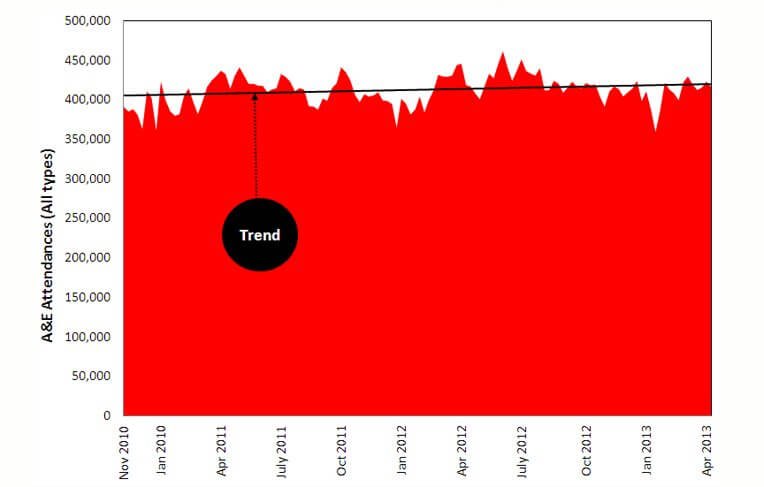 Over the past decade there has certainly been a huge increase in work. But this is partly attributable to the changes in statistical collection and a degree of ‘supply induced demand’ as new routes into emergency care (WiCs, MIUs) opened. In addition, the possible substitution of some types of care (a visit to the GP) by others (a visit to a minor injuries unit) may have increased A&E attendance statistics, but given that WiCs and MIUs are generally not open out-of-hours, it is not easy to see how the rising workload of these services is linked to changes in GP out-of-hours arrangements, as implied by the Secretary of State for Health.

The increase in A&E workload has slowed in recent years, so the question now is not so much how to slow the speed of the increase, but how close to capacity the system is. The recent figures showing that the target that 95 per cent of patients should not wait longer than four hours in A&E is being breached on an increasingly regular basis is indicative of capacity problems amongst other things. Slowly raising the temperature does eventually boil the frog.

as an emergency nurse I have found that many patients are unable to access their Gp.

I am trying to find A&E admission rates at ward level, specifically in three Boroughs of London: Redbridge, Camden and Brent and for the period 09/10 going forward (and ideally with London as the comparator). Does anyone know if this configuration of data exist?
With the release of figures that demonstrate a sustained rise in the elderly population, have you any further thoughts on this matter?

As I stated above in May last year

'The data that is missing is the data about complexity.

Reading this (interesting) post made me think about how I have changed how I use the NHS in the last 10 years. My local health centre typically has a 10 day wait for appointments, and refuse to do work like dressing changes. As a consequence, I no longer visit the GP (unless it's for the kids), but instead use a mix of a walk-in centre and a minor injuries unit, both of which are near the office. Both of them have opened in the last 10 years: as a consequence of poor local health provision, my "stats" have moved from GP to "A&E". Given that the walkin has a wait time of 2-3 hours (nearer 2 tbf), I also try and limit that interaction, relying in the chemist for minor problems. Overall I take the least problematic route!
Hi,

Not sure if appropriate here but can anyone point me to hypothesis based analysis on the drivers of increased AnE attendances based on a whole system modelling of unscheduled care?
I have seen GP referral management protocols, GP and ENP streaming, UCCS, tariff capping, QOF etc. I have tried historically to ensure data collection with common currencies across the whole local unscheduled care system through contracts but am met with the 'we do not collect that data", " we cannot afford to collect that data", contracts signed on an envelope without the detail and poor quality, unincentivised national data collections that aim to capture data that truly can't answer the questions we need to be posing. I understand providers will only collect mandatory fields in data sets that link to payments, when will we be more intelligent in our approach to this?
Any recommendations gratefully received as I see report after report and dashboard after dashboard and yet nothing really changes in content.
Any yes to publishing standardised rates data!

If we are in "time to think differently" mode, i was interested in Camilla Cavendish comments in the Times a couple of days back. She pointed out that the excellent University Hospitals Birmingham Trust had soaked up around 60% of the additional self-referral/999 activity across the City over the past couple of years, and argues that the marginal tariff for emergency admissions was perverse. In other words, if the public vote with their feet and pitch up at their local acute provider because they know it is any good and will look after them well, isn't it perverse to penalise the provider financially because the local population choose to use it. How about recognising that people have no confidence in alternatives and allowing the local acute care provider to grow its income by providing timely, responsive services that people want to use, instead of penalising it for the help seeking behaviour of the local public. Are we committed to genuinely patient centred services and choice? Or are we only committed to these ideals if they choose "care closer to home" or "ouside hospital". Stop demonising acute providers for failings in the rest of the system

David Oliver
All very interesting. Everyone talks about 'demand' but not 'need'. These are two very different things, and it is disingenuous of the government to shy away from the need to educate the public about managing minor illness and injuries appropriately, while at the time time fuelling demand by hinting at the promise of unrestricted access and by bringing online more services (NHS Direct and 111) to heighten health anxiety among the population.
Patrick, thank you for your comment. The data sources have now been added to this blog.

Jen
This is an informative article, thanks for this. But what data are you using? There aren't any references unless I'm looking in the wrong place.
I would be astounded if the national roll out of the 111 service does not result in a significant increase in attendance at type 2 & 3 units. In Oxford, where the service has been running for some time, an astonishing number of people with trivial problems are being directed to A&E by relativel untrained staff using cumbersome and unvalidated algorithms