There will be important differences between clinical commissioning groups (CCGs) and primary care trusts (PCTs) – it could hardly be otherwise, given the radically different context in which CCGs will be operating. But in terms of the population size they cover – a hugely significant issue for any commissioning body – CCGs and PCTs look increasingly similar.

We have known for some weeks now that the average size of CCGs looks set to be considerably larger than originally anticipated – the median population covered by the 212 CCGs preparing for authorisation is 226,000, compared to 284,000 for the 151 PCTs they replace.

But many have assumed that while the average size of CCGs may not be so different, one thing that will be different is the degree of variation. The analysis below shows that this is not the case.

There is certainly significant variation between CCGs – with a 13-fold difference between the biggest and the smallest. But what is often missed is that the same is true with PCTs – Hampshire PCT covers a population 14 times larger than Hartlepool PCT.

The graphs below illustrate this similarity. In the first, each line represents one PCT or CCG (figure one). In the second, the horizontal axis has been standardised to allow direct comparison (figure two). What these figures show is that the distribution of CCG sizes – though not exactly the same – is not as dissimilar from PCTs as we may have thought. 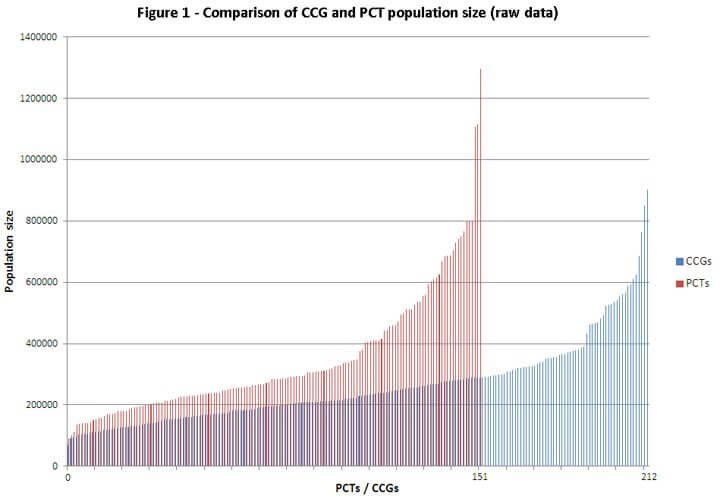 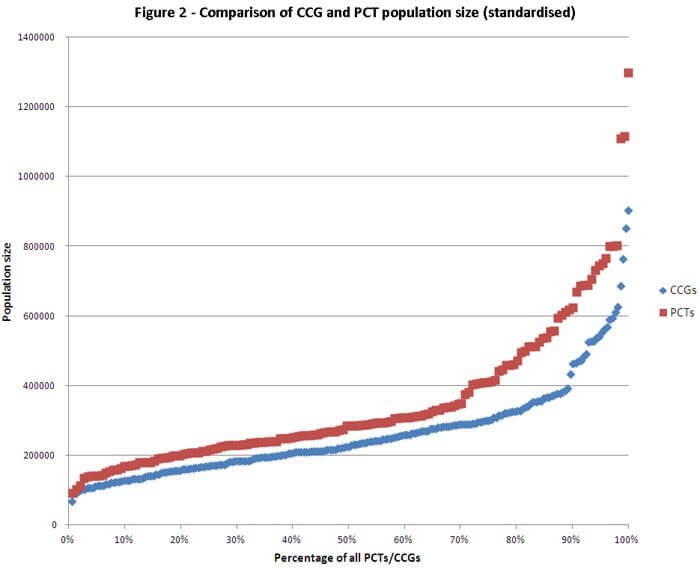 There are, however, some important caveats to bear in mind

First, management resources will be lower for CCGs, and as a result of this more of their functions will be shared between CCGs or delegated to commissioning support services and other organisations. So the organisations themselves will be smaller than PCTs even if the population size they cover is comparable. In some cases the extent of sharing or delegation of commissioning functions may raise the question of whether the size of each individual CCG is the most important issue.

Second, while the degree of variability may be similar for CCGs and PCTs, the factors driving it could be very different. PCTs are administrative constructs, whereas the shape and size of CCGs has been influenced by a number of factors, including clinical flows, perceived ‘natural’ population groups, the pattern of professional relationships across a local area, and existing administrative boundaries. A CCG may be small (or large) for different reasons than those that determine PCT size.

The analysis shown here does not imply that the way CCGs function or the outcomes they achieve will be comparable to PCTs – that remains to be seen. What it does illustrate is how pragmatic considerations can shape the implementation of policy and take it in very different directions from those originally envisaged.

'and take it in very different directions from those originally envisaged'

Are you sure, about exactly what was originally envisaged ?

I 'gleaned an understanding', that one of the functions of the 2 statutory lay persons, and the one statutory nurse, on CCBs was to introduce a different perspective from, and independence from inappropriate influence by, the GPs on the CCBs. That would seem to require, either small CCGs, or 'intertwining' of CCGs, so that these people could truly be 'arms length' from any of the GP Surgeries within that particular CCG/B.

That is very tricky, with single CCGs covering entire cities - or did I misunderstand something ?
The last paragraphs are thought provoking. CCGs seem to have developed in a more "emergent" manner than did PCTs. In a complex organisation like the NHS, it is possible that this might have some benefits over a more planned, top down approach...will be interesting to see how this pans out.
CCGs also have fewer staff because they don't have public health departments, don't commission specialised services, offender health, general practice, optometry, or dentistry!
Great blog, Chris. It would be great to follow up with an analysis of income distribution - whether CCGs are more or less socioeconomically homogeneous than PCTs. I think there's an assumption that they are, but it would be good to test.
Very useful, Chris - thanks.

Calum, are you somewhat cynical, in a sort of 'general way', as I am, then ? Or was that a narrow point, that the institutions invariably get in the way of things like 'bottom-up' control ? And that you cannot easily have at the same time responsibility at the top, and decisions at the coal-face ?

I do sometimes struggle, with claims made that 'this evidence supports our view', when I often cannot see a direct connection between the quoted evidence, and the policy change it is claimed to support.
CCGs must be very like PCTs since they will carry out many of the same functions. Doctors on the CCGs will essentially be board members, one or two enthusiasts in a CCG may spend much of their time with the CCG, but for the majority of doctors the CCG will be peripheral to their work as doctors.. If a change in the balance of services is proposed by one practice someone still has to look at demand across the CCG, waiting times, use of specialist facilities etc., in order that a decision is taken on the basis of evidence,
Thanks everyone for the comments. Calum Paton and Mike Stone both raise a question about what was originally envisaged. Clearly different people have held diverse expectations about CCGs, but there was certainly an initial feeling among many that CCGs (or GPCCs, as they were set to be at the time) would be significantly smaller and more numerous than PCTs. The government always carefully refused to give a number, but early indications were that there could be over 400. The management allowance made that unfeasible.
'Chris Naylor - Fellow, The King's Fund
20 Jul 12'

Chris, you know much more about this than I do. But I can remember 'trial groups of GP Surgeries' 'proving the concept works' as a claim coming from ministers - so were any of those trial groups of GPs, anything like even 1/400th of the country ?

If not, what exactly were they proof of - it cannot have been of the likely success for a system with CCGs of the type of size you mention, surely ?

Community pharmacy is a critical part of primary care in England, but its role and relationship to the wider NHS is often poorly understood. This explainer looks at the community pharmacy sector in England, explaining how pharmacies are contracted and funded, the types of services they provide and future trends in the sector.
Long read

A key part of the NHS long-term plan, primary care networks (PCNs) will bring general practices together to work at scale. But what are they? How are they funded and held accountable? And what difference will they make? Beccy Baird explains the latest form of GP collaboration.

Commissioning is the process by which health and care services are planned, purchased and monitored. Here we look at the commissioning process in more detail, the organisations involved and how it is changing.