The British public's satisfaction with the way the NHS runs took a nose dive in 2011 – falling from 70 per cent (its highest ever level) to 58 per cent. This was the largest fall in any year since the British Social Attitudes survey began in 1983. If that wasn't enough, what makes this drop even more notable is that it comes after almost continuous annual improvements in satisfaction since 2001 (2004 was the one exception). 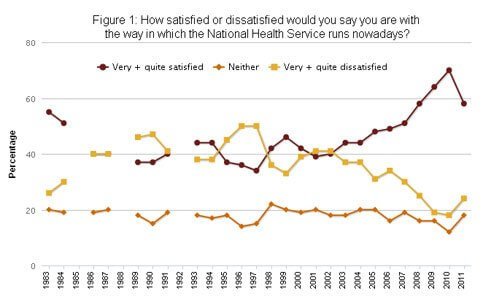 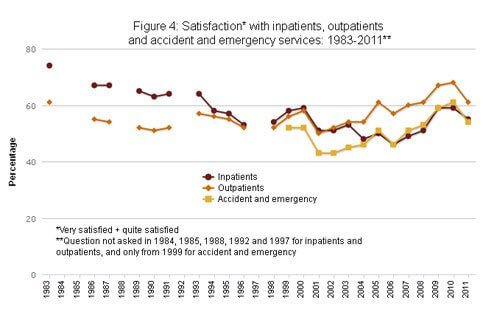 The one service to buck the trend was dentistry with a 5 percentage point rise in 2011, continuing increases in 2009 and 2010. 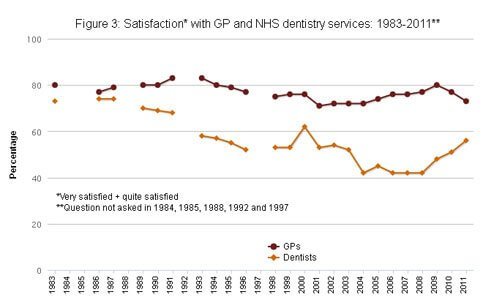 But despite the good news for dentistry – probably a reflection of increasingly better access to dentists carrying out NHS work – and while one data point doesn’t make a trend, the overall picture is disappointing.

Interpreting satisfaction polls can be difficult. Should we, for instance, take the drop in satisfaction as an indication of a drop in the performance of the NHS? Probably not. Waiting times and rates of health care acquired infections – two key performance measures for the public – remained broadly unchanged or, in the case of MRSA and C. difficile, continued to fall over the time the survey fieldwork was carried out (June to November 2011). Despite some well-publicised failures, there is no evidence of deterioration in the quality of care according to patient experience surveys.

However there are other factors which could provide an explanation. For example, we know from analysis of past surveys that there is a link between expressions of satisfaction with the NHS, the political party people identify with, and the party in government. The year 2010 saw a change of government and although satisfaction rose overall, a breakdown of the figures shows this was driven entirely by Conservative and Liberal Democrat supporters' attitudes; satisfaction among Labour supporters was virtually unchanged compared to 2009. However, in 2011, not only did Labour supporters’ satisfaction fall dramatically – so too did satisfaction among Conservative and Liberal democrat supporters. This seems to suggest some other factors influencing attitudes towards the NHS, as well as an element of political partisanship.

Newspapers, television and other media are key sources of information for many about the NHS. So what was trending last summer? In England at least, headline news was a very polarised and heated debate about the government’s proposed reforms of the health service. Reports of opposition to the reforms were high profile and, regardless of the merits of arguments on both sides, will have no doubt contributed, at a minimum, to a climate of uncertainty in the public’s minds about the NHS and its future. Government rhetoric about the relatively poor performance of the NHS compared to other countries and the need to cut bureaucracy (used to support their case for reform) will have also contributed to this.

Apart from media headlines and unease about the possible impact of the government’s reforms to one of Britain’s best loved institutions, the other notable policy factor that is likely to have filtered through to the public’s consciousness is the virtual, real-terms freeze in NHS funding and the associated programme to improve productivity. However, the language associated with this is unlikely to have been reassuring to many: If the NHS says it is making savings, many may well hear the word 'cuts', for example.

Put all these factors together and we start to see a picture emerging: public discontent and worry – not necessarily with the way the NHS is performing now, but with its future – which sees its expression in lower levels of satisfaction.

As for the future, the 2012 British Social Attitudes survey will be in the field this summer with headline satisfaction results available early next year.

Given the controversy about the health reforms will still be fresh in people’s minds, as will the industrial action being taken later this month by doctors over pensions, the worry – both for the government and the BMA – must be whether this year’s dip in satisfaction with the NHS and GP services is a one-off or a sign of things to come.

British Social Attitudes survey 2011: public satisfaction with the NHS and its services

The topline results and satisfaction trends relating to the NHS and health care issues from the British Social Attitudes survey 2011.

My wife was in hospital for 5 months last year, 10 weeks in intensive care. Her treatment and the care was first class. Our local GPs are excellent, however making an appointment to see a particular GP is getting increasingly difficult. I know it is the holiday period, but I have had to wait for a month to see my GP to review whether I can drive again now that I've linked the symptoms to a particular drug. I think that a lot of the negative reporting of the changes to the NHS hasn't helped.
There is an extraordinary comment in the analysis of this report -" other things (including external factors such as media stories and more internal factors such as NHS staff attitudes and behaviour) will impinge on patients’ views of their stay in hospital, which will be independent of the actual quality of their care. ". How on earth can staff attitudes and behaviour be considered as independent of actual quality of care? Surely staff attitude and behaviour is the foundation of the quality of care?
Amanda
Most people's experience of the NHS is good, but there are too many instances of very poor performance particularly for older patients. The results probably reflect the public's nervousness about the massive changes taking place in the NHS and don't understand them. Publicity of the opposition to the changes from doctors and nurses will have influenced the responses. Time will tell if things actually improve.
I agree public confidence in the NHS has fallen due to the cost cutting, (sorry efficiency savings) and complicated reforms being made. We are also hearing many stories from around the country about hospitals struggling due to staff shortages and everyone seems to be saying the same thing, the care was good but they felt the staff were very overstretched and there have been reports of many unfortunate 'incidents.' This is no surprise as many front line posts have been made redundant and in order to save further money management I would think are cutting corners. I fear it can only get worse with staff morale low now and further major changes to be made, this will only be the tip of the iceberg! It is definitely getting more difficult also to make a timely appointment with your own GP.
while surveying public confidence in the nhs I would ask if those in hospital unable to speak out for themselves have been heard ?my treatment at worthing hospital has been first class,however the treatment to my friend (82) who totaly disabled and unable speak for herself was very upsetting she was not given enough drinks and was given food that was not vegetarian her care there (food wise ) was very poor .I believe had I or her daughter not gone into the hospital every meal time to feed her she would have starved through lack of care while bored staff on 12hr shifts watched the clock waiting to go home.
It does not surprise me. PCTs have spent billions, particularly in east London borough but health inequalities remain, and are getting worse. There is hardly any appetite to improve their performance, still wasting money on consultants and short-term temp staff. All PCTs which are now clusters [ELC, ONEL etc] have very top heavy structures with manangers from predominently White backgrounds who don't live in east London. They have hardly make any progress on their equality performance in terms of workforce let alone health inequalities. CCGs will operate in the same fashion so don't hope anything to improve soon- they will show middle finger to diversity and disregard their equality duties altogether!!!
Slightly concerned about the validity of your data.
We do not have a UK NHS service. NHS England and NHS Scotland now bear no resemblance to each other. The public in the rest of the UK are often misled by English based stories on the NHS which bear no relevance to what is happenning outside England. I would suggest that you carry out four seperate studies with larger samples which are analysed individually to get a true picture of what is happenning across the UK.
Hi Joe

A couple of points
1.The survey is not UK, but britain, ie England, Scotland and Wales
2. The public may, as you say be 'misled' by England-based stories....or they may not. I don't know. But i do suspect there is some media 'leakage' as it were between countries. We note this in our report by the way.
3. The survey is not carried out by the King's Fund, but by NatCen social Research who have been doing it since 1983. Sample size was smaller in 2011 for the satisfaction questions than in previous years which meant percentages based on Welsh and scottish respondenets alone would not be particularly robust, hence we combined them in fig 8. increasing the sample would be great - but it costs quite a lot, so we had to make a decision to go with what we were able to afford i'm afraid!
4. Regarding changes in satisfaction between England and Scotland+Wales, our report also suggests that other factors - eg funding squeeze - may have played a part in drop in satisfaction in the latter two countries (as it might also in England of course)
If only the government would trust dedicated NHS workers to do the work that they are trained to do and not spend so much tax payers money on regulation - CQC (useless organisation) now taking on 8500 GP practices from April 2013. They are a bureacratic nightmare which causes organisations to spend zillions on staff and paperwork in order for them to write a report. It really is a sledgehammer to crack a nut. I am sure there are some poorly performing organisations which PCT's will already know about, so why not leave the good ones alone to carry on seeing and caring for patients. This would allow much more money to be spent on patient care which is what all doctors, nurses and NHS staff want.
on a slightly different subject i await a reply from the GMC with regards to a complaint about a Dr Elizabeth Cripps so called assessment during an ATOS Medical that totally flew in the face of previous reports, they initially said they could do nothing i await a further reply