It is strongly rumoured that the ‘Quad’ (the regular meeting of the Prime Minister, Deputy Prime Minister, Chancellor of the Exchequer and Chief Secretary to the Treasury that discusses important coalition issues) will convene this week to consider the government’s position on the Dilnot Commission’s recommendations for social care funding.

Despite the coalition’s pledge in its programme for government that it recognised the urgency of reform, almost a year has elapsed since Dilnot reported. Whispers from Whitehall – see the BBC’s report last week – reflect deepening pessimism that the government will act. The King’s Fund has made the case for radical change since its landmark report by the late Derek Wanless in 2006 and many people have worked tirelessly to push the issue up the policy agenda. So it will be deeply disappointing if the issue gets kicked back into the long grass.

There’s never been any doubt that the success of longevity – for younger disabled as well as older people – would come at a price and any proposals for reform will require more money, a daunting ask in a worsening economic climate. But setting aside the Treasury’s congenital predisposition to resist any demand for additional public spending, do their concerns about the Dilnot proposals stand up?

Their big worry seems to be that capping people’s maximum contribution to their care costs would involve spending public money to protect the inheritances of wealthy babyboomers when other public services are being cut. But as the graph below shows, if Dilnot were implemented around 75 per cent of care spending would go to those in the lowest 60 per cent of the income distribution. This includes those with relatively modest assets exceeding £23,250 who are disadvantaged most by the current system, especially those just below the median who lose nearly 90 per cent of their assets. If the Treasury really is concerned to ensure any extra spending should not benefit the better off (a commitment to social justice many will find laudable, if somewhat surprising) social care seems a strange place to start, representing a tiny sliver (about 6 per cent) of all public spending on older people. And of course the very poorest will continue to get their care free, so it is virtually impossible for any reforms to improve the position of this group. 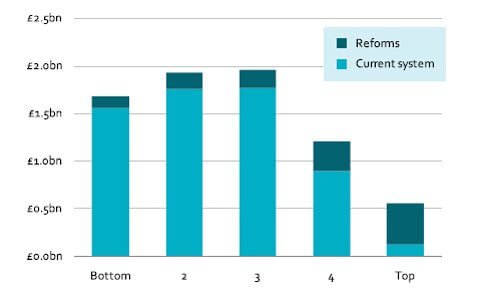 Source: Volume 2 Fairer Care Funding – Analysis and evidence supporting the recommendations of the Commission on Funding of Care and Support.

It is worth noting that no one dare question that the NHS should provide free or expensive care for the relatively wealthy – we apply a different principle whereby need overrides personal income or wealth, thus removing people’s fear of catastrophic costs. Dilnot’s proposals apply the same principle to social care. And the overall distributive impact of extra social care spending will depend crucially on how, and from whom, the money is raised – a subject on which there has been little open discussion about the options.

The other apparent objection is that the Dilnot proposals do not address the extra funding needed for demography or the existing unmet need. But the authors of Dilnot’s terms of reference were at pains to exclude those questions and concentrated instead on ways of sharing the costs in a fair and sustainable way. To argue that the proposals should not be implemented because they don’t answer questions that were never asked seems not only to move the goalposts but to dismantle them completely.

Rejecting Dilnot on these grounds does nothing to change the simple arithmetic that care costs will soar as more of us grow older. Without reform they will fall indiscriminately on councils, individuals and their carers, providers and the NHS. There isn’t a no-cost option.

Dilnot has come up with a sensible and coherent framework for sharing the costs in an explicit partnership that protects people from catastrophic costs, offers a better deal for people with modest assets and allows everyone to plan ahead. The urgent challenge now is to identify where the total quantum of resource – for Dilnot and demography – could come from. There are lots of options. In our 2010 analysis Securing good care for more people we showed how attendance allowance and some universal benefits could be reformed. The Institute for Fiscal Studies and others have looked at changes to tax reliefs and national insurance contributions. Estate tax or ‘care duty’ are other ideas. Many of these will be unpalatable, unpopular and deeply controversial. But the consequences of indecision and delay will be worse still.

Well, the issue of funding and the specific (and eminently sensible in my view) recommendations of the Dilnot report would seem to have been kicked into the long grass. Plus ca change as they say. However, there is, i believe, an important point to make which picks up Richard's gloomy but correct prognosis - that is, that the public need to support any plan to fund social care, not only in terms of a financial contribution, but in 'ideologically'. Dilnot understood this and his ideas were to my mind based on a recognition that people are for the most part ready to accept that a radical solution is needed to the issue of how to meet the spiraling costs of social care - they are also anxious to see the issue made a priority. Unfortunately it seems our politicians, and the mainstream media, are less concerned (hence the empty seats in the House while Lansley made his speech, and the lack of any proper debate on Newsnight). Is there any better example of how seriously out-of-touch they are? I doubt it.
i have spent all my life working in industry , as management , sales ect . about 7 years ago my best friend asked me to help him out restructuring his business (providing supported accommodation for vulnerable adults with mental health issues).
i have been totally amazed at the lack of help and services available for these service users. having not worked in this sector before , it has opened my eyes ; how in emergencys social workers , cpns and other front line agencies are not equipped to solve any problems when there is a crisis , and front line staff (support workers \) have to deal and cope with problems on a daily basis... it has made me realise if you havnt got any family , friends , ect batting in your corner these days , YOU ARE IN TROUBLE...... THE PEOPLE AT THE TOP NEED TO SPEAK TO PEOPLE LIKE ME ,,,AND I CAN PUT THE TRUTH OVER TO THEM
I actually sat in on a Health Committee meeting chaird by Lord Lipsey on June 29th, which had been arranged by insurance company Partnership'. the point of the meeting was to discuss alternatives to Dilnot because apparently, Dilnot was too expensive.

In his opening address Lord Lipsey actually said, and I quote, "Dilnot does not leave enough room to sell insurance products."

When I was asked to speak I made it quite clear that this country spends £50billion a year on interest repayments to private banking cartles, £40bililion a year on waging war and has just spent £7billion (the amount need to fund Dilnot) on an olympics ceremony.

We have the money and the resource to provide social care for everyone in this country that needs it - and Lord Lipsey agreed that public money is being misappropriated at a higher level and that that needed to be addressed.

As I encouraged everyone in the room that day, I say to you now - you need to go to the root of the problem, which is not Dilnot, or the social care model (which would work perfectly if government were not so corrupt). It is central government itself and companies like Partnership who are able to buy their way into government and change laws and policy simply in order to turn a profit.

Government should be closed to those with commercial interests and her priorities reassessed, so that the needs of the people are always put before profit.
By the way, has anyone else noticed that all links to the Dilnot report and all supporting documentation on the DH and gov.uk websites have disappeared? If anyone has any working links, or the actual pdfs of any of these, I'd appreciate it if you'd send/list them! Thanks!