The public health reforms mean that health improvement services will be the responsibility of local government from 2013-14. To pay for it, funds will be transferred from the Department of Health. It has decided to base the overall sum on how much the NHS as a whole has spent on these services in the past, with some uplift for inflation. Once it has determined the overall sum, it then has to make the tricky decision about how much to give each local authority – whether to stick with the historical pattern, or to allocate it on some other basis. How it decides on local allocations and how fast it moves to implement the changes in allocations will have big consequences for local authority public health services.

This explains why the Department has been undertaking much feverish work over the summer and autumn to systematically tot up, for the first time, how much the local NHS actually spends on public health. The resulting report sets out how the health improvement spend in the NHS in 2010/11 – about £2.2 billion from the overall public health spend of £5.2 billion – maps to local authority boundaries. This report makes interesting reading.

The good news is that individual primary care trusts' local decisions are correlated with population size as we would hope – the more people there are in an area, the more that area tends to spend on public health. However, it is clear from even the most cursory of glances at Figure 1, that there is much wrong in the details of how current NHS spending on public health varies between areas. London Councils have been quick to point this out; spending in London ranges from £19 per head in Bexley (£4.4 million in total) to £117 per head (£27.8 million in total) in Tower Hamlets. The average spend across England is £40 per head but in England, as in London, there is huge variation – Kent's population is over twice the size of County Durham's yet NHS spending on public health in Kent is lower. This is because each primary care trust has made its own decisions on how to allocate its NHS funding between public health and other priorities. Those decisions may be based on rigorous analysis of local needs, on purely historical grounds or on higher local priorities being given to treatment rather than prevention. Since the Department has not been in the business of telling the local NHS how much it should spend on public health or of collecting statistics, until now this variation has been invisible, unlike variation in access to high-profile routine NHS services, such as operations or drugs. 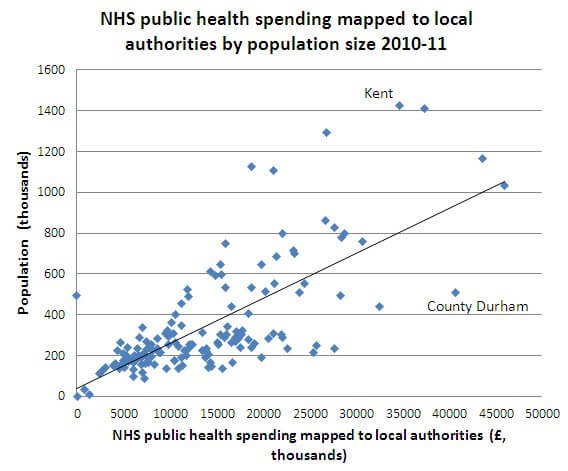 So what happens next? There will be a national cap on the public health budget for the first time as it is handed over from the NHS to local authorities. The centre therefore has asked the Advisory Council on Resource Allocation (ACRA) to help it decide which local authority gets what from the overall pot.

No doubt ACRA will think long and hard about allocation, so that the 2013/14 budget – when local authorities' responsibilities go live – will be distributed where it is needed most, rather than where local NHS decisions have historically left it. Figure 2 shows how the 2010-11 spend per head correlates with one driver of public health need, the index of multiple deprivation. Again, the line encouragingly goes in the right direction with relatively more being spent in deprived areas. But again there is wide variation. For example, Birmingham has much higher levels of deprivation than Kingston-upon-Thames, but they spent about the same per head on public health in 2010/11. 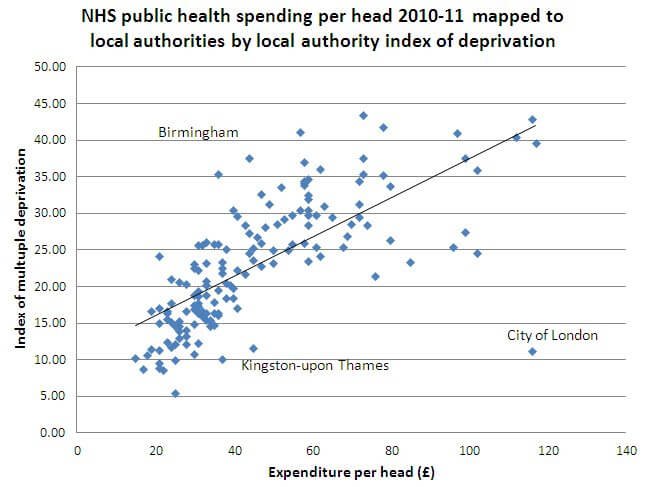 Whatever formula ACRA comes up with, the Department has a dilemma in how fast it implements it. From a national perspective it should move quickly, sending the capped budget where it is needed most. But putting myself in the shoes of a Director of Public Health who had fought hard to see higher than average NHS resources invested in public health in my patch, I would take some convincing that my residents should effectively be penalised under the new system as the fruits of my efforts are re-allocated to areas that historically had not prioritised public health. What makes sense and is fair nationally, under a capped budget based on historical spend only, smacks of unfair treatment locally. For this reason, it seems unlikely that the Department will move quickly to ACRA's formula – although its protestations that these mappings should not be interpreted as predictions for 2013/14 does suggest some movement.

The real shame in all of this is that controversy could have been avoided had the Department asked ACRA the broader question 'how much should be spent on public health and how should it be allocated?' as opposed to simply 'how should existing NHS spending be allocated?' This would have lifted the arbitrary £2.2.billion cap and allowed quicker movement of funds to where they really need to be. Unfortunately, with public health allocations the old joke in response to 'How do I get to Manchester?' rings true: 'Well, I wouldn’t have started from here.'

This blog was also featured on the Public Finance website.

How sensitive to population size are Public Health needs - and needs for spending?
In the Kent/County Durham example, the total amount seems fairly similar (OK, Kent slightly lower!) but looking at the population, Kent has a much higher population.
Two questions:-
1. what are the additional costs for a larger population
and
2. in a CCG with a small population - so limited budget - if there is no scalability, should the public health costs be prioritised over all the other calls on the local health economy?
The 10-11 snapshot which gave rise to this notional 'cap' on funding can also be significantly distorted at local level. In my own area, as examples, spend on health checks was £20k in 2010-11, in the current year it is £1.4m! Adjustments to the Local Authority figures have also been made at average 'national' levels irrespective of the local data (e.g. the transfer of the responsibility for abortion/sterlisation services). Other splits, because of a lack of an objective basis, were purely arbitrary (e.g. the notional split of funding of childrens services between 0-4 and 5-19). The combination of these is a potential significant shortfall on funding even a standstill position.
Mary, these are good questions. Some public health spending is scalable, such as some types of information campaign, but a lot of interventions clearly aren’t since they depend on individual intervention. We would therefore expect to see higher spend in areas with higher population size, as we do. But there is arguably too much variation in spending around this general finding, if local areas’ decisions are focussing purely on local need. Some of this variation will also be related to the answer to your first question, some of Kent’s lower per capita spend may be due to it being much more efficient in how it spends its budget. Frankly, although public health cost-effectiveness studies are starting to appear we know next to nothing about how efficient different areas are in translating the spend they get into better public health outcomes. On your second question, each area will need to make that decision itself, but in the future this should at least be more transparent and open to question as data like this becomes more available - and open to scrutiny as in Nick's response. One of Public Health England’s new roles is to provide this sort of benchmarking information so that local areas can compare themselves to others, it is hoped that it will also tackle the efficiency question head on.
I would really like to know how one CCG to another determine how much money is spent on the varied health departments. For example, the area has been given £X amount and they divide so much to diabetes care, so much for dealing with obesity and operations or how much £ for IVF?
As i have been looking into the dreaded postcode lottery of the NHS on can not fathom how this is worked out? Would you be able to answer this for me please?