The latest results from the British Social Attitudes (BSA) survey, carried out during the summer of 2010, show the highest satisfaction rating for the NHS in Britain since the survey began in 1983. A low point in 1997 of just 35 per cent satisfaction has now doubled to 70 per cent. And with only 18 per cent saying they were very or quite dissatisfied, net satisfaction is also at an all-time high of 52 percentage points. 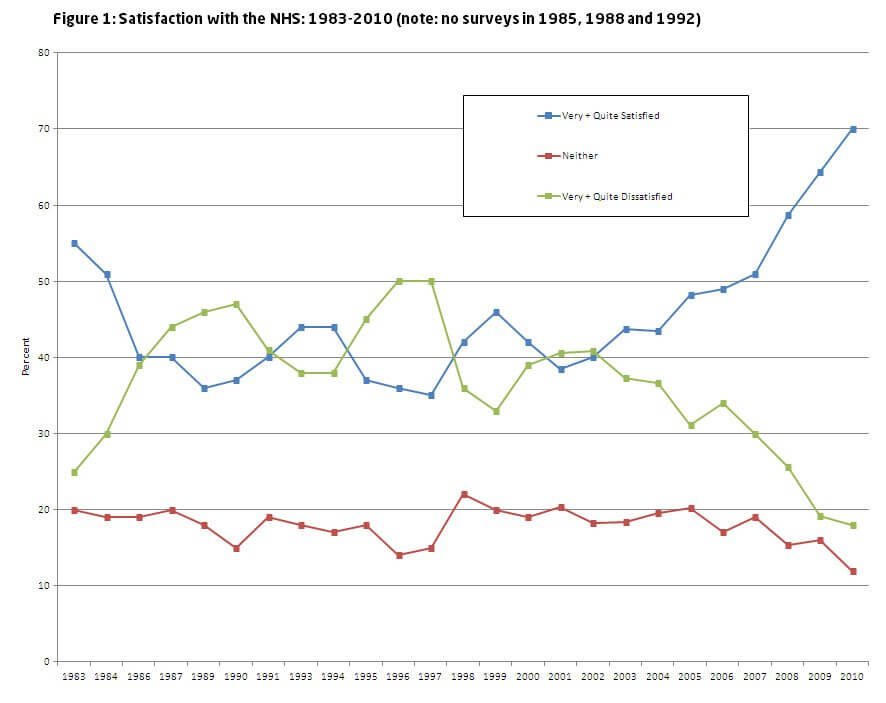 As figure 1 shows, there is a remarkable gap between those who express satisfaction and those who are dissatisfied with the NHS. We have now had a decade of year-on-year improvements in satisfaction. So are yesterday's figures, as the BSA's 28th report states, simply a continuation of this trend?

A slight fly in the ointment for the NHS is that, while satisfaction has increased, dissatisfaction has not decreased much since 2009 – down by just 1 per cent. The new figures reflect more people getting off the fence as it were, with a drop in the proportion of those expressing a neutral opinion.

A crucial question, asked by those who have sought to analyse previous BSA surveys, is what drives or lies behind trends in satisfaction. We know from past surveys that people who have had recent contact with the NHS tend to express greater satisfaction than those with little or no contact. We also know that there seems to be a link between expressions of satisfaction, the political party in power and the political allegiance of those surveyed: if the party you support is in power, you tend to be more satisfied with the NHS.

It surely can't be a coincidence that the huge jump in satisfaction expressed by Labour supporters in 1998 and 1999 came after Labour came to power in 1997? And what do we see in 2010, just months after the new coalition government was formed, but satisfaction amongst Conservative and Liberal Democrat supporters jumping by around 8 per cent, with Labour supporters flat lining. It's not all about politics of course. It's interesting that even under Labour governments, Conservative and Liberal Democrat supporters have expressed big increases in satisfaction with the NHS. 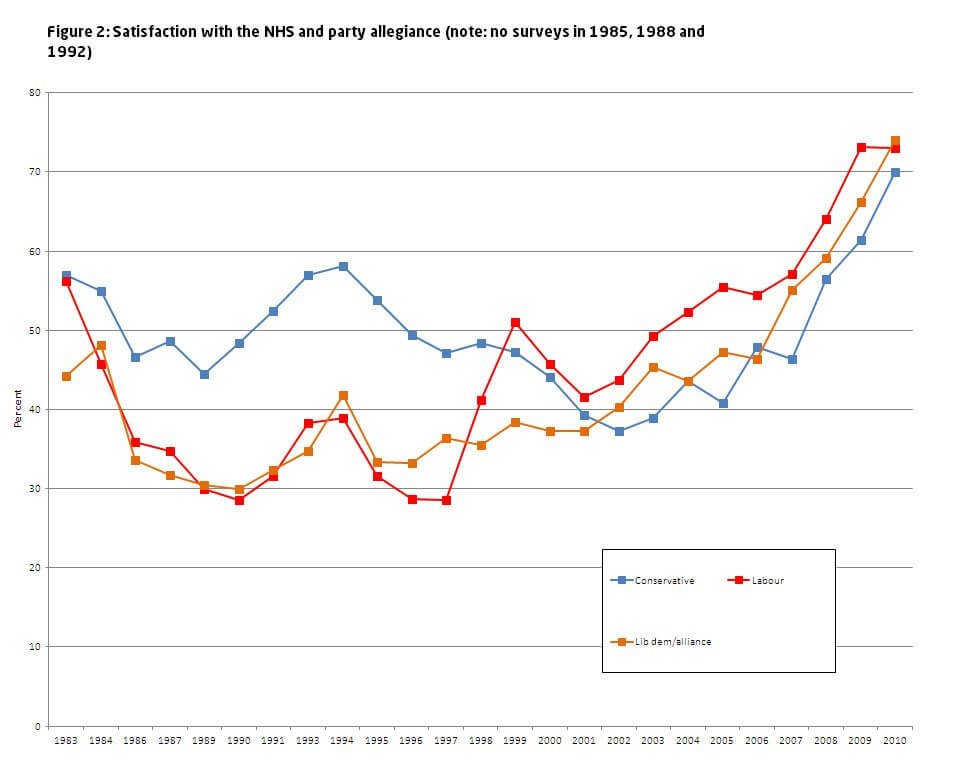 Overall, the NHS should be extremely proud of these satisfaction rates – even satisfaction with dentists has increased!

It will be fascinating to see where these trends go next. BSA data for 2011 – a survey now sponsored by The King's Fund – has already been collected and next spring we plan to publish headline figures, with more detailed analysis towards the end of the year. But at 70 per cent already, and with wide public debate and concern over the coalition’s plans for NHS reform, can satisfaction get much higher?

In regard to service delivery - you would have to suggest that these findings and the continuing upward trend over the last decade - would translate to the public not supporting the radical changes that have, and are about to begin. This seems especially relevant by the finding that those who use services tend to have greater levels of satisfaction.

Could there be a gap for research that asked the public specific and fundamental questions about the direction of the Health & Social Care Bill? Although perhaps this should have been commissioned some time ago!
Google "Growth Negligence" if you would like to discover what older people think about NHS cancer care, which we have just researched.
My forum is increasingly concerned about the number of reported cases of operations being postponed, in some cases, many times - with patients called again and again for pre-assessments that never lead to operations. The operations are vital for older people's well being eg knees, eyes, hips. In some cases, people are offered private operations and told that there is no money left for NHS operations.
What happened in 2002...? Something great it must have been!

How will the autumn Comprehensive Spending Review address the short-term and long-term needs of the health and care system, especially when the future is so uncertain? Jonathon Holmes considers the Chancellor’s options.
Press release