Following the Office for Budgetary Responsibility's (OBR) new estimates for general inflation in the economy, and in particular revisions by the Office for National Statistics (ONS) in the way the GDP deflator is calculated, real changes in NHS funding for the English NHS have now changed.

While the amount of extra cash the government has spent or plans to spend on health care remains the same £14.84 billion for the five years from 2010/11 to 2014/15 (inclusive) – the amount of this increase now likely to be swallowed up by inflation is £13.85 billion. This means there is now £610 million more to spend in real terms than previously estimated.

So, while the cash stays the same, what it can buy increases but largely as a result of technical changes in the way inflation is measured by ONS. While these changes, according to ONS, produce a more accurate measure of inflation, they do not of course change actual inflation.

For the NHS at the front line, the Chancellor's announcement of a further cap on public sector pay of 1 per cent in real terms each year for two years beyond the current real pay freeze will mean more money for other things in the NHS assuming that pay would have increased by more than 1 per cent in the absence of a cap. 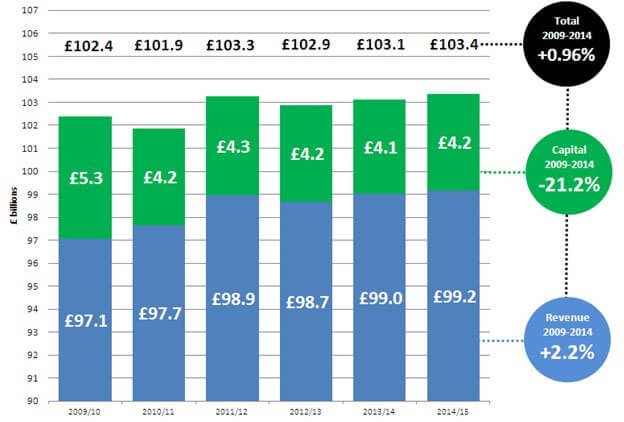 Sending this to my Conservative MP Caroline Spelman (Meriden)
Do those millionaires on the front bench, able to use the private sector for their medical needs, realise that the NHS is in sharp decline for all other British residents ?
Interesting analysis, however it appears to be based on the presumption that inflation in healtcare is equal to general measures of inflation. This is not the case. Healthcare inflation consistantly outstrips general inflation measures, so the net result is a potential decerease in real funding. Or am I missing something?
Russell, I have used the GDP deflator as this is the traditional measure used by all governments when presenting public spending in real terms. However, you are right to point ouyt that the NHS experience of inflation will be different as it buys a particular basket of labour and goods whose rate of price change (inflation) will be different from that of prices across the whole economy. over the last 35 years or so, NHS-specific inflation has averaged at 1% higher than the GDP deflator. However, we can't assume this in any one year or over the next few years in particular. The public sector pay freeze for eg will probably mean that NHS inflation will be less than the GDP deflator (hard to say by how much). So, over the next few years my guess would be that purchasing power in the nHS will be slightly better than the real figures produced by applying the GDP deflator.