After unprecedented increases in the number of staff over the past decade and a half – from 840,000 to 1 million – the NHS workforce in England is under considerable pressure. All NHS organisations, whether providing community, mental health or acute services, have to meet challenging productivity targets, and hospital budgets are also under pressure through reduced activity and lower real-terms tariff prices.

Added to this are government ambitions to cut management costs by 45 per cent by 2014, in part through the abolition of primary care trusts and strategic health authorities by 2012/13. It is clear that the size and structure of the NHS workforce – which accounts for about half of the total NHS spend each year – looks set to change.

The beginning of this change is perhaps evident from the latest compulsory redundancy figures, released by the Information Centre in October following a request from the Department of Health to review the accuracy of the figures. Since July 2010, when the coalition government released the NHS White Paper, the number of compulsory redundancies in the NHS in England has increased in three successive quarters.

While these figures might seem small for a workforce of approximately 1 million, it should be noted that these are only compulsory redundancy figures and therefore do not include voluntary redundancies or posts that have been vacated and will not be filled.

With compulsory redundancy figures only available at a national level it is difficult to measure this data in any further detail. It would be particularly interesting to look at local variations and at any further factors contributing to changes in workforce numbers. The data cannot reveal whether the redundancies are the result of organisations cutting staff and services in response to financial pressures, or whether they are the result of genuine planned productivity improvements, where fewer staff are needed because a service has been improved by reviewing pathways or through the use of technology.

While this data cannot distinguish between these two cases, the figures indicate one aspect of how the NHS is responding to the productivity challenge. 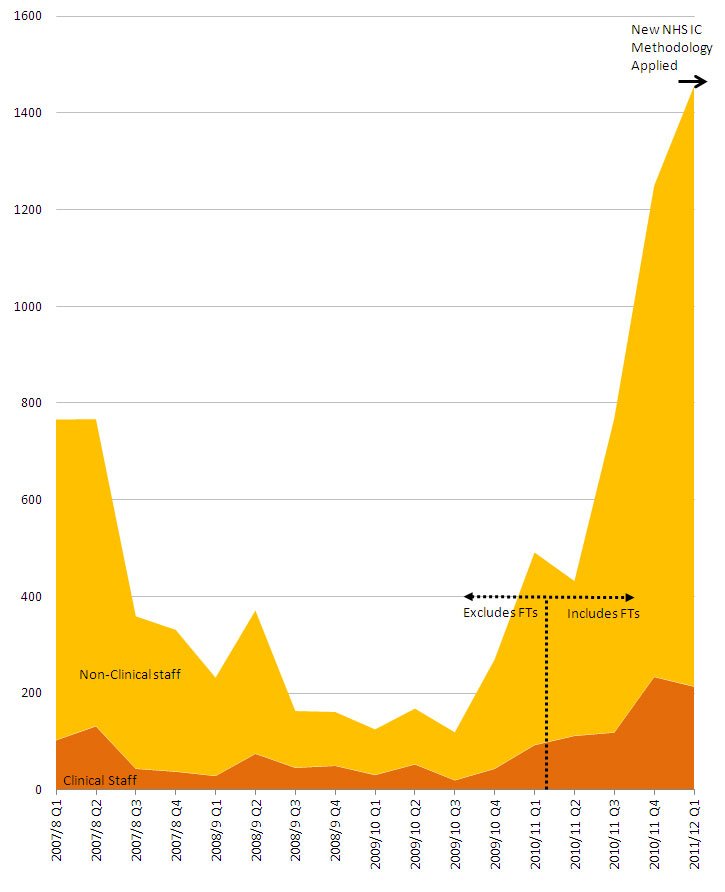 We are 3 academics at The University of the West of Scotland carrying out a research study on Redundancy - to what extent have people been protected by their legal rights? Having read your blog posting, I was hoping you might assist us in gathering more information. We are aiming to publish the results through a law journal.

We would very much appreciate if you would post this note below on your site.

Thanks for your help in advance.


This questionnaire is being issued for a law research project which is taking
place at The University of the West of Scotland.

Many of us have personal or family experience of redundancy and most often this is
financially difficult and a cause of anxiety and distress.

We want to get information to understand to what extent people are being protected
in redundancy situations by having their UK legal rights observed.

We would very much appreciate if you could take the time to complete the
questionnaire. You are not required to give your name; you cannot be personally
identified, unless you choose to, so your confidentiality can be completely
assured.

At the end of the questionnaire, there are several links where you can find useful
sources of advice on many aspects of redundancy.

Whether this questionnaire is relevant to you personally or not, we would also
very much appreciate if you could pass this questionnaire onto others, please just
forward the e-mail. It is important for is to have as many responses as possible,
from across the UK.

The purpose of the questionnaire is to gather information which we intend to
publish in a law journal. Journal articles of this type can be used to influence
future changes in the law and are especially influential where there is a large
amount of evidence (e.g. in this case through a high response rate to a
questionnaire), so your response is of value.

The questionnaire should not take long to complete, if there is any question you
do not wish, or feel you cannot answer, please just skip that question and
complete as many questions as you can. On most questions there is a box if you
would like to add any information.

Please use this link: surveymonkey.com/s/PHNW7WK and you
will be taken to the questionnaire.


Thank you very much for your help!