'The £20 billion funding gap and the UK's low current spending could be seen as opposite sides of the same coin. Should we want to, the UK could increase spending on health to meet the increased demand. That is, we could simply pay the £20 billion extra that the NHS is currently having to so painfully excise from the cost of services.'

So said Tom Moberly, the Deputy Editor of GP newspaper, in a recent blog post on the Nicholson challenge. But is he right?

Much of the £20 billion funding gap is accounted for by the need to improve the quality of health services. Improvements in quality – and to an extent, volume – could certainly be achieved, as Tom Moberly suggests, simply by spending more; in fact, spending roughly £20 billion more over the next four years. This is indeed an option, and it would move us along the ranking by one place on the OECD (the Organisation for Economic Co-operation and Development) scale (see below). 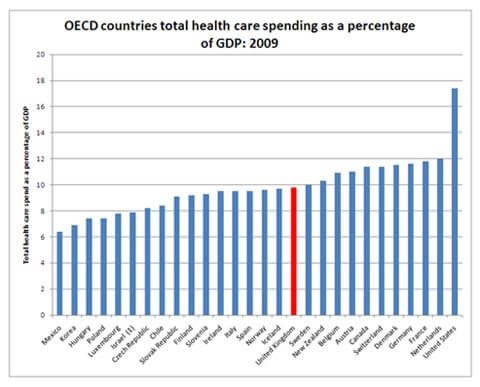 The obvious question, however, is what we would be expected to forgo in order to fund such spending. Some options include: reduce council spending (already being cut by around 27 per cent in real terms)? scrap the Trident refit? cut spending on schools, roads and welfare payments? increase taxes? borrow from the financial markets? Well, you pays your money and you takes your choice.

What we spend on health care is undoubtedly a matter of choice (as opposed to an act of God). But, especially in the short term, the opportunity costs of spending more are anything but inconsequential.

The reality is that the NHS has received one of the best settlements of any spending department, but still, it's not great when compared with what it would like to spend. The task it faces therefore is not an obsessional splurge of cost-cutting, but finding ways to generate more value for patients when the simple option of spending more is – for now at least – not available. The fact that the NHS may be relatively efficient at producing health care (as Tom suggests, with reference to a recent Commonwealth Fund survey), is neither here nor there in the circumstances. Regardless, it is inconceivable that the NHS is currently operating at the absolute frontier of its production capabilities – as variations in everything from lengths of stay to waiting times, GP referral rates, prescribing and day case rates among other things, would suggest.

Over the longer term, and as the economy gets back to higher rates of growth, we may – in fact, I suspect, will – choose to spend more on health care. But the productivity challenge never goes away. Striving for the best use of its (always) scarce resources (relative to the demands on them) is an ongoing priority for the NHS – made even more urgent in the current situation.

'Much of the £20 billion funding gap is accounted for by the need to improve the quality of health services...' seems to be a rather glib statement.

The figure of £20bn has achieved traction - a year ago it was £15-20bn (significant margin there?) The basis for the number remains fag-packetty 'based on historic health inflation trends, an ageing population and new technology, bit of Wanless thrown in to inflate a bit more...' all factors with degrees of uncertainty bigger than a large thing.

None of it seems to take account of current economic circumstance. Circa 70% of NHS pending is staff and there is a pay freeze for the majority. Drugs companies are reacting to climate and drugs cost inflation will reduce. The ageing population - difficult to cost the effect of a population a year older than last year on next year's costs (if anyone has done this please show it to those people who talk of this £20bn)

And some of Wanless assumptions re waiting times, patient accommodation etc have clearly been dropped.

Yet the NHS beavers away, having laid off the staff qualified to do so, to make savings that add up to £20bn. And how many of the QIPP schemes stand up to scrutiny? As long as they add up to £20bn, and central pressure pertains, then poor decisions are made and quality most definitely suffers.

Too many cuts are being made without rational consideration because of the blind faith in a figure of £20 bn.

So ask not if the £20bn is affordable, first ask what figure is needed then manage quality to fit. Hitting a, potentially significantly, overstated target (whilst sacking the people best qualified to move on this) is undoubtedly the worst way of improving quality with resources available.