An important issue in understanding trends in waiting times – and what may be influencing changes since June – is seasonal variations. Hospital activity, for example, has long shown peaks and troughs at certain times of the year – most notably at holiday (troughs) and post-holiday (peaks) periods, especially in December/January and also at Easter and in August/September.

Similar patterns can also be seen in the way waiting times change over the year too.

For month-on-month changes in median waiting times, there is a noticeable seasonal pattern, although the timings and strength of the peaks and troughs vary between the three stages of waiting (patients still on waiting lists, patients treated in putpatients and those treated as inpatients), and between years.

For median waiting times for patients still on waiting lists there are notable peaks in August and December and troughs in September/October and February. 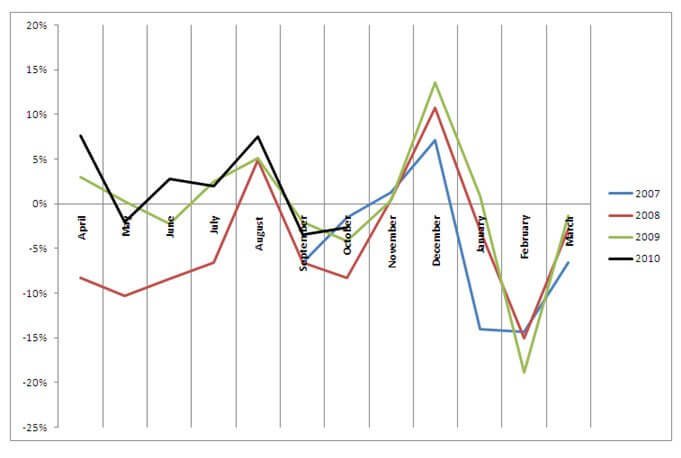 The seasonal pattern for median waits for outpatients is also clear from the figure below. However, the timing of the peaks and troughs is different, with notable peaks in January, April and September and troughs in December, February and October. 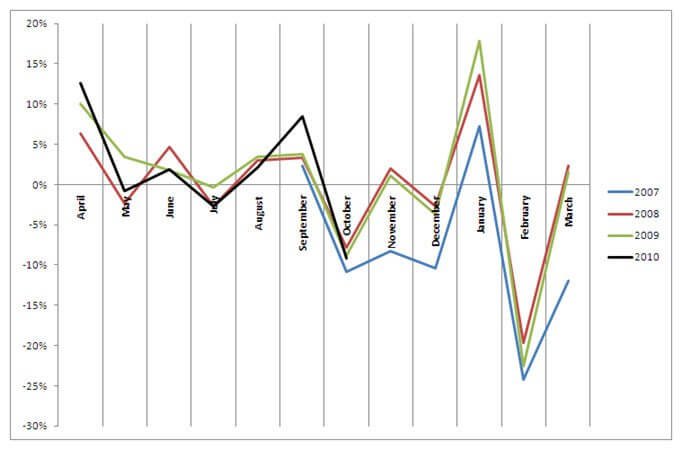 The seasonal pattern for inpatients is similar to that for outpatients. 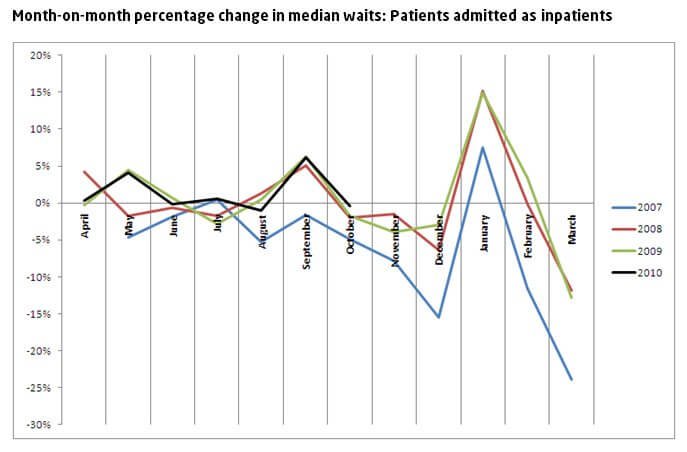 The seasonal trend pattern that is evident visually is also clear statistically. The table below shows the correlations between pairs of years for each stage of waiting and shows strong positive associations – ie: changes up or down from month to month in one year, move in a very similar way to changes in another year. 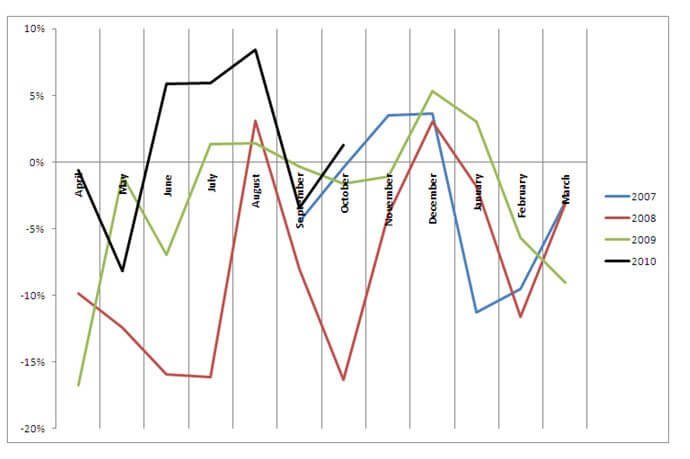 Statistically, the weaker and more erratic seasonal pattern is evident too, as the table below shows, with correlations varying between years and also changing also changing between a positive and negative association.

Some predictions for the future

As subsequent waiting times data are published we will update our analysis to see if seasonal effects continue to be an important factor in changes to median waiting times, and whether they continue to play a relatively small role in explaining changes in the proportion of patients waiting over 18 weeks. We will also see if our predictions for median waits turn out to be correct.

All graphs adapted from Department of Health: Referral to Treatment Waiting Times Statistics

We will be collating and commenting on key aspects of NHS performance, including hospital waiting times. This page shows the results for April 2011.

John,you have produced an impressive analysis of key statstics but what of the patient experience?to give you an example,I was told I needed to be refered Nov 2010 as a Consultant to Consultant referal, but since all these changes that means you have to go back and starting blocks agian via your GP.I received an appointment via choose & Book for Feb 2010 was seen and had further tests early march with a follow up appointment in early june 2010,3 appointments and cancellations later!! I got my test results Nov 2010.Whatever analysis is made this is not a good patient experience and could also be a patient safety issue.Nine months to receive test results for what is quite a serious condition.Perhaps further work is needed on consultant to consultant referals.
Agreed.
Sorry first date should read 2009 not 2010
John,
Thanks for sharing this analysis, i found it interesting as i too have investigated "seasonality" within an orthopaedic service. I found the term seasonality quite daunting and i investigate this strictly with a statistical test for seasonality. I then found out that the data that was provided was not actually seasonal though it did conform to some pattern that appeared seasonal. I would be interested to hear if you tested your data for true seasonality or whether you interpreted the pattern as seasonal from a visual perspective. The question behind your analysis is intriguing, what causes this apparent variation/seasonality? I would conjecture that the main causes in the build up of a queue is not only variation/seasonality in demand but clinicians cancelling clinics for various "summer" or "winter" reasons coupled with clinicians taking leave
Kris
No, I havern't tested the seasonality of the data statistically - difficult to do as we only have a few years' worth of data. I have used the term 'seasonal' somewhat broadly simply to decribe (from eyeballing the trends plus a few basic correlations) what appears to be some regular patterns at certain times of the year. These patterns will be a combination of demand and supply factors (with, I suspect, a bias towards the latter).

Veena Raleigh examines trends in life expectancy at birth up to 2020 and the impact of Covid-19 in 2020, gender differences, geographical inequalities, causes of the changing trends since 2011, and how the UK’s life expectancy compares with other countries.
Press release

'Roughly 1 in 12 people in England are awaiting NHS treatment': The King's Fund responds to the latest NHS monthly performance data

Deborah Ward, Senior Analyst at The King’s Fund, comments on the monthly performance data on A&E, referral to treatment and diagnostics.
Press release