When the Spending Review was announced in October, the NHS budget faired reasonably well in comparison to other departments, with a real-terms increase of just under 0.1 per cent per year.

But it now seems likely that inflation may eat in to or even reverse the small real-terms increase in the NHS, going on the latest inflation forecasts by the Office of Budget Responsibility (OBR).

Its latest economic report, published on 29 November, revises its June forecasts for the GDP deflator. This is the general measure of inflation that the Treasury uses to calculate inflation-adjusted or real figures, and is the measure used in the Spending Review to calculate NHS funding in real terms.

As the cash rise in the total NHS settlement announced by the Spending Review was 10.21 per cent by 2014/15, the small real-terms increase of 0.34 per cent over four years is now forecast to be a small real cut of around 0.25 per cent – equivalent to an average annual real cut of 0.062 per cent. Compared with this year, this translates into a real reduction of around £0.25 billion by 2014/15 compared with this year's budget (see figure below). Broadly, despite the revisions to the GDP deflator, the NHS is left more or less in the position it expected: with essentially flat real growth in funding for the next four years.

However, as the OBR acknowledges, there is of course uncertainty about any economic forecast, and remains to be seen whether the GDP deflator turns out as predicted by the HSJ.

Of more direct importance to the NHS and its purchasing power is its own experience of inflation over the next few years. While the pay freeze lasts, NHS-specific inflation will remain low – probably at or just below the level of the GDP deflator. Less certain however is how pay and prices will change beyond 2013/14.

While the changes in inflation forecasts do have an effect on the reported real terms changes in the NHS budget, the reality remains that it still faces an unprecedented challenge in improving its productivity. 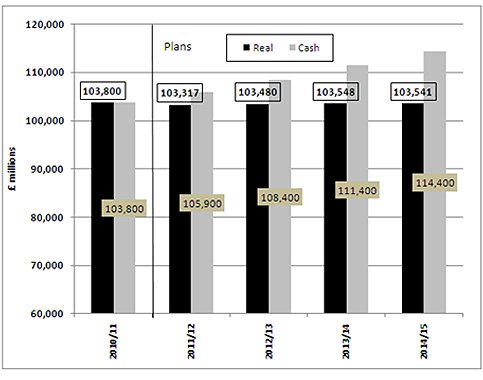 This blog also features on the Health Service Journal website.