Patient demands and the desire to improve the quality of NHS services will outstrip NHS funding growth to the value of around £21 billion by 2013/14. If this gap is to be filled it will require improvements in productivity – making every health care pound work harder. Improving productivity is not about 'cuts' or 'savings', but rather, finding ways to do more with the same. 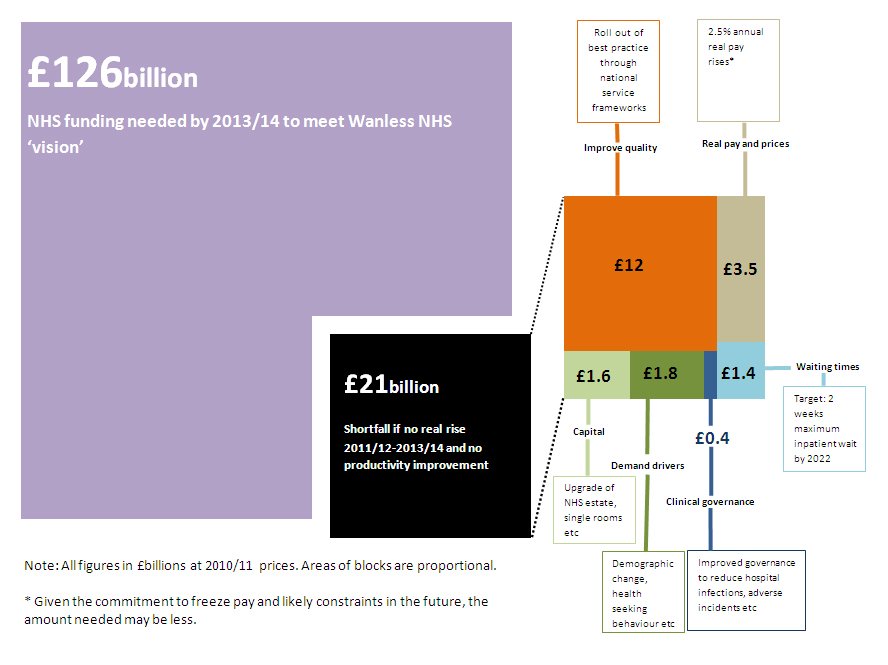 The figures in this patchwork square represent the monetary value of the productivity improvements required to meet Sir Derek Wanless's 'vision' for improvements in staff pay, reductions in waiting times and improvements in the quality of services. A closer look at the potential funding shortfall raises a number of questions.

First, are some of the original Wanless aspirations and assumptions set in 2002 either already met now or no longer considered appropriate – with the implication that further increases in funding for some areas is no longer needed?

It might be argued, for example, that having achieved its 18-week maximum waiting times target, and with waiting times no longer the public concern they were, the increased funding of approximately 1.4 billion over the three years to 2013/14 estimated by the 2002 Wanless Review to reduce waiting times to a maximum of 2 weeks by 2022/23 is no longer necessary.

It might further be argued that much of the capital and clinical investment objectives set out by Wanless have also been substantially met – a further £2 to £2.3 billion.

Second, given the exceptional circumstances of the current recession, is there a case for reviewing some of the assumptions underlying the increased funding suggested by Wanless?

For example, the assumption of a 2.5 per cent real annual pay increase for NHS staff over and above general inflation in the economy is, with the prospect of zero real additional funding for the NHS overall, untenable. The cost of this Wanless assumption will form the bulk of the real pay and price effect cost of between £3.4 and £4.2 billion.

Overall therefore, through a combination of a pay freeze and policy decisions not to further reduce waiting times or invest in new capital for the next three years, the cumulative funding gap by 2013/14 could be reduced from around £21 billion to between £12 and £14 billion – equivalent to annual productivity improvements of around 3.5 per cent to 4.5 per cent. Such gains remain challenging however, and rely on difficult if not contentious decisions on pay.

This diagram and an unabridged version of the text first appeared in Healthcare Finance, May 2010.

Our 2007 review of NHS funding and performance, led by Sir Derek Wanless.

John - What do you think the coalition government will do about Practice Based Commissioning? The Tories seemed to be commited to a model that is closer to fundholding. In the 1990s fundholding appeared to generate efficiency savings, although they were outweighed by start up costs (Audit Commission 1996). Presumably the start up costs would be much lower now, as much of the managerial expertise and IT is now in place. A key issue would appear to be incentivising GPs to engage in this process; something the PBC model has failed to achieve, (King's Fund, 2007, 2009). Will Cameron grasp the nettle and allow GPs to profit directly from efficiency savings, or will Clegg veto this?