Hugh Alderwick worked in the United States on sabbatical from The King's Fund. He was awarded a Harkness Fellowship in Health Care Policy and Practice 2017/2018 by The Commonwealth Fund in New York. Hugh spent the year carrying out research into the role of health care systems in addressing patients' social needs, working at both the University of California, San Francisco and Berkeley.

Hugh joined The King's Fund in 2014 as Senior Policy Advisor to Chris Ham. He has published research and analysis on a range of topics - including NHS reform, integrated care and population health, and opportunities for the NHS to improve value for money. He provided policy advice to organisations within the NHS and carried out a review for the Department of Health on measuring the performance of local health systems in 2015.

Prior to joining The King's Fund, Hugh was a management consultant working with the NHS. He also worked on Sir John Oldham's Independent Commission on Whole Person Care, established by the Shadow Secretary of State for Health in 2013. The Commission looked at how NHS and social care services could be better integrated to meet people's physical, social and mental health needs, and made recommendations for policy and practice. 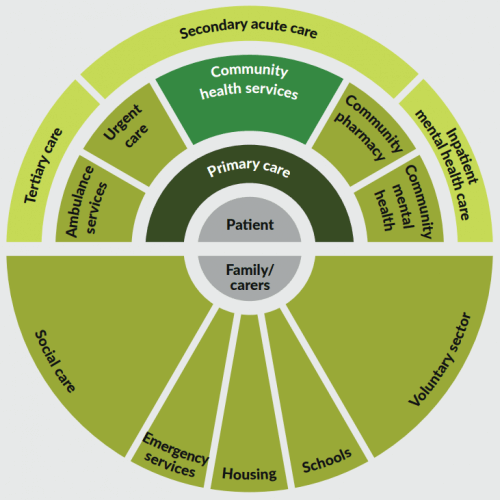 Reimagining community services: making the most of our assets

This report looks at the current organisation of community health services and considers how the health and care system needs to change to meet the needs of populations now and in the future.
Report

Making the case for quality improvement: lessons for NHS boards and leaders

At a time of significant financial and operational pressure, local and national NHS leaders need to focus on improving quality and delivering better-value care. We make the case for quality improvement and share lessons for NHS boards and leaders.
Report

Sustainability and transformation plans in London: an independent analysis of the October 2016 STPs (completed in March 2017)

Sustainability and transformation plans (STPs) are key to the future of health and care services. This report, commissioned by the Mayor of London and based on work completed in March 2017, looks at the five STPs in London, their contents and common themes.
Article

Yet more performance ratings for the NHS: new STP ratings are narrowly focused and centrally driven

In July NHS England published its first 'progress dashboard' for the 44 new sustainability and transformation partnerships, but these new ratings are narrowly focused and centrally driven, say Hugh Alderwick and Veena Raleigh.
Report

Leading across the health and care system: lessons from experience

This paper offers those who are leading new systems of care some guidance on how to address the challenges they face. It draws on the Fund’s work on the development of new care models, sustainability and transformation plans, and accountable care organisations.
Article

Sustainability and transformation plans for the NHS in England: what do they say and what happens next?

Plans for the future of health and care services in England hold promise but need time, investment, and a dose of realism, say Hugh Alderwick and Chris Ham.
Report

STPs offer the best hope for the NHS and its partners to sustain services and transform the delivery of health and care, but how will STP footprints transform their plans into reality? Our report identifies the challenges that lie ahead.
Article

This report, for the World Innovation Summit for Health 2016, sets out a framework for developing new strategies to improve population health that join up healthcare systems with other services and sectors.
Slideshow

Hugh Alderwick: Tracking the development of sustainability and transformation plans in England

Hugh Alderwick, Senior Policy Adviser to the CEO at The King's Fund, shares findings from our report on how sustainability and transformation plans have been developed in four parts of the country.
Report

Little is known about the process of developing sustainability and transformation plans. This report looks at how STPs have been developed in four parts of the country.