The current home of The King's Fund, at 11–13 Cavendish Square, was formally opened by our President, HRH the Prince of Wales, in May 1996. However, the building itself has a much longer history, which is outlined below.

The King's Fund building, including the café and information centre, are currently closed to the public due to the coronavirus pandemic. 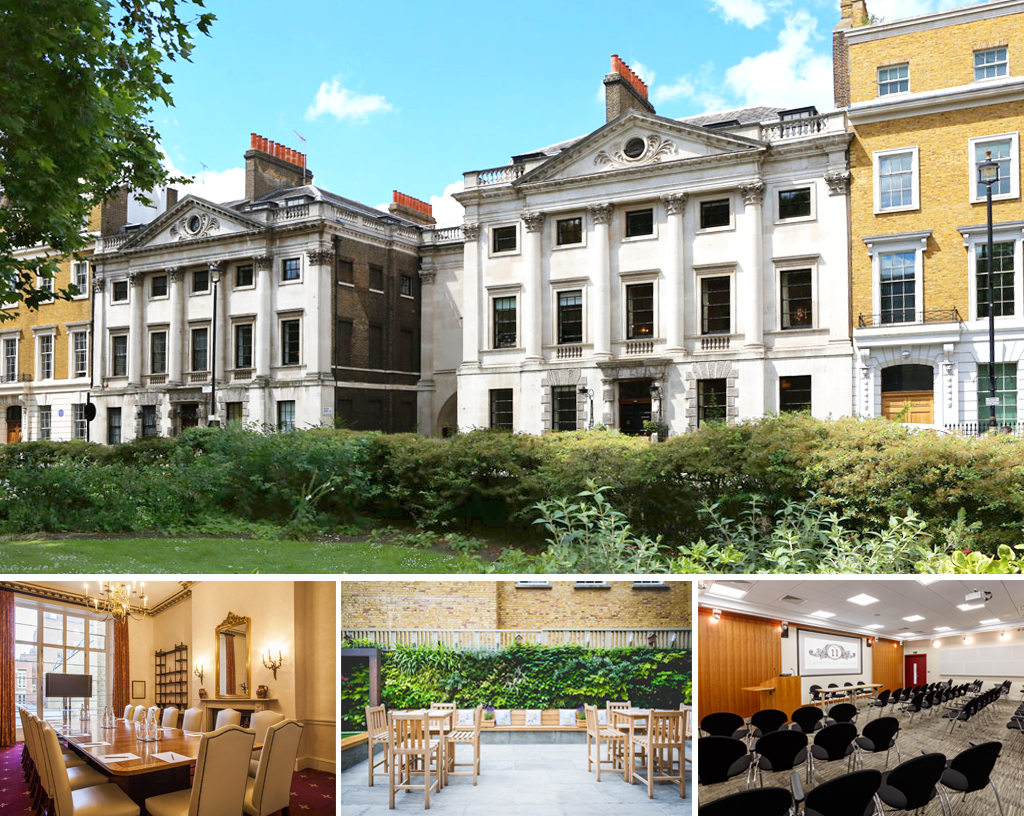 The birth of Cavendish Square 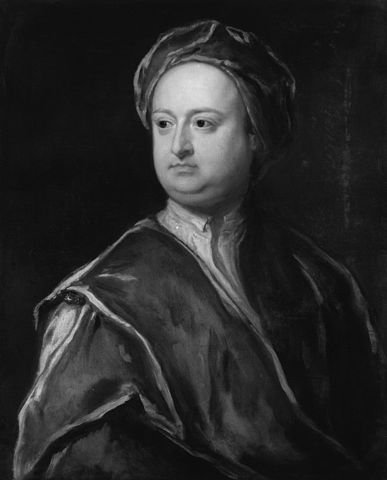 During the first quarter of the 18th century, London saw a period of intense building activity. Great estates were mapped out to the west of the city, including the great Cavendish-Harley estate, conceived by Edward Harley, Earl of Oxford.

Harley and his wife, Henrietta Cavendish-Holles, owned a sizeable area extending north from Oxford Street – the Marylebone Fields. Harley was keen to lease out the land to augment his income, and engaged the services of John Prince, the self-styled ‘prince of builders’, to help him plan the layout of the estate, with Cavendish Square as its focal point. He employed James Gibbs to supervise the architecture, and Charles Bridgman to lay out the garden.

Land ownership in the city was highly political, and the large estates planned during this time were generally either Whig or Tory enterprises. Cavendish Square became a Tory enclave, and the whole of the north side was leased to Lord Carnarvon (later the first Duke of Chandos) in 1720.

Carnarvon hoped to build an enormous baroque-style country house on the site now known as 11–14 Cavendish Square. But in 1722, he suffered great losses in the speculative crisis known as the ‘South Sea Bubble’, and the design was never realised. He later commissioned two houses at the east and west corners of the site. 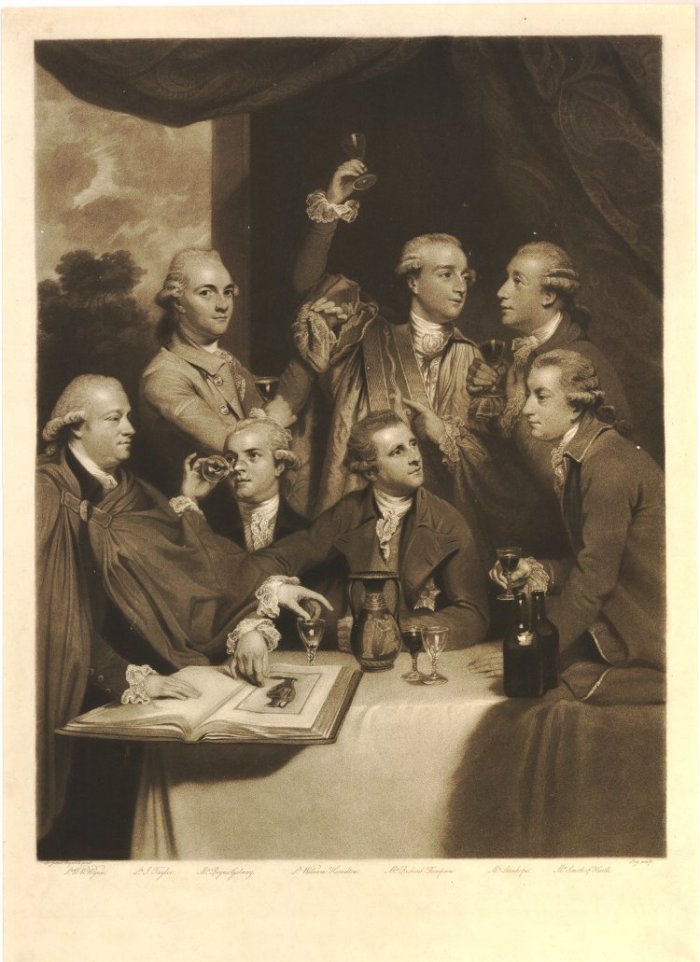 Although Cavendish Square was laid out in 1717–20, it was many years before all sides of the square were developed. Sometime in the 1740s, the vacant space on the north side now occupied by Nos 11–14 was bought by the Dilettanti Society – whose aims as an organisation centred upon the enjoyment of antiquity. Once again, a grand design was conceived – this time based on an Istrian temple – but this was never built.

Cavendish Square never quite rose to the grand heights intended for it. Country estates still commanded greater interest among the aristocracy, and town houses were seen as occasional dwellings for certain times of the year. Dick Turpin, the highwayman, is said to have robbed a farmer just north of Cavendish Square in 1720, but the Cavendish-Harley estate was considered urban even then.

During the late eighteenth century, the site between Lord Carnarvon’s two houses was sold again, this time to George Foster Tufnell, MP. In the late 1760s or early 1770s, Tufnell built houses at 11–14 Cavendish Square, which remain virtually intact to this day.

Speculative building was common at the time. The pair of houses on each side of Dean’s Mews both have very fine five-bay Palladian-style façades of Portland stone. It is thought that Tufnell bought the stone from the Dilettanti Society as a job lot.

He left a wide thoroughfare between the two houses in order to preserve a significant urban axis, which followed on from Hanover Square, over Oxford Street and down Holles Street to Cavendish Square. But the opening only ever led to a mews, which housed laundries, a split-level coach house and a small, walled crescent for turning coaches. 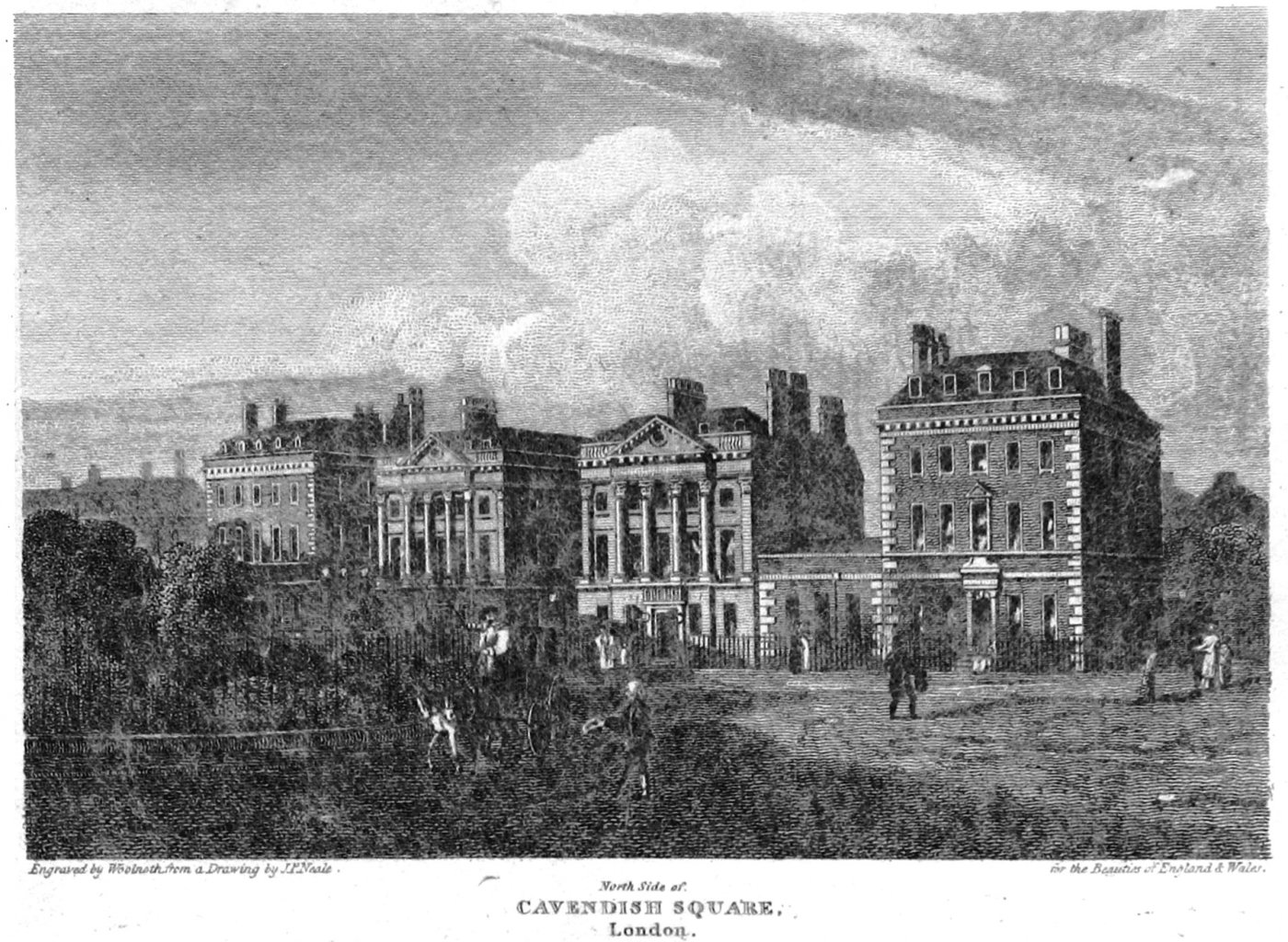 No 11 was acquired by the Convent of the Holy Child of Jesus in 1889, which went on to acquire No 12 in 1891. The sisters had previously occupied cramped accommodation near Marylebone High Street and wanted more space for their teaching activities. They went out to teach in poor schools, subsidising this by running a fee-paying school for middle-class children.

Doorways were put in on each floor to connect the two houses and plans were soon in hand to expand the number of pupil teachers being trained. By 1894, money had been raised to build an extension, known as the New Building, at the back of No 12, comprising a school hall (later a kindergarten), a refectory (later a gym), three dormitories, a classroom and a clothing room.

In 1895, the sisters established a training college for Catholic secondary school teachers. In 1898, they were able to buy No 13 from Edward Tufnell – perhaps a descendant of the George Foster Tufnell who had built it. In 1899, a subway was constructed between Nos 12 and 13, the work being done by a Mr Hinsley, the brother of Cardinal Hinsley. In 1904, the London County Council (LCC) scrapped the system of pupil teachers in their schools and the convent took over the New Building accommodation that was vacated as a result.

Changes and improvements continued. In 1906, a hot-water system was put into No 12 and electric light was installed in Nos 11 and 12. In 1907, a new chapel, sacristy and infirmary were built to replace the earlier chapel that had occupied the two connecting rooms on the right of the front door of No 11. The site for the new chapel was obtained by demolishing stables and cottages in the mews behind Nos 11 and 12. The single-storey chapel had a steeply pitched roof and, just under the eaves along each side, a row of round windows.

During World War 1, the convent escaped damage despite some scares, including nearby Zeppelin raids. In 1932, a large new building designed by EW Banfield was constructed to extend the classroom accommodation and student bedrooms. The buildings, especially No 12, suffered bomb damage in World War 2, evidence of which can still be seen on the exterior stonework. Repairing the damage required the skill of the architect, Louis Osman, who restored the interior of the Georgian house. Osman’s best-known contribution is the bridge link between Nos 12 and 13, and the commission of a sculpture for the façade.

Damages to the building during WW2

Osman wanted a sculpture of the Madonna and Child that would appear unsupported and ‘levitate’ above the arch. In 1952, he asked Jacob Epstein to create a maquette, with the sole specification that the sculpture should be cast in lead from the bombed roof of No 12. 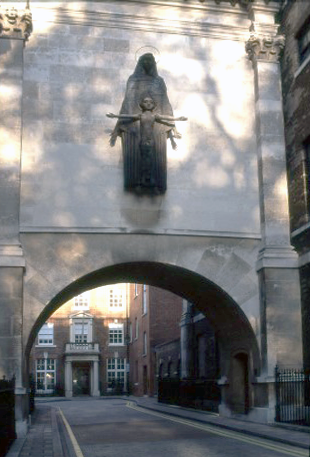 The sisters approved the maquette without knowing the identity of the sculptor, and Epstein began work on the piece. But before he could complete the work, so the story goes, a near-crisis occurred when the Arts Council congratulated the convent on their innovative choice of artist. At the time, it would have been considered near sacrilege to allow a non-Christian to execute a Christian icon. The convent withdrew the commission and Louis Osman, devastated, offered to resign.

But the Arts Council persuaded Osman to try again. The Mother Superior agreed to view the work a second time and, after much contemplation, a compromise was reached whereby Epstein would remodel the Madonna’s head to give her a more serene expression. He also agreed to come before the community of nuns to be ‘catechised on his attitude to the work’.

The figures were cast in lead; three tons were used from the old guttering on the houses. Epstein’s ‘Madonna and child’ was finally unveiled by RA Butler, Chancellor of the Exchequer, on 14 May 1953.

In 1969, Heythrop College, a Jesuit institution founded in 1614, acquired the property. It moved from Heythrop mansion in Oxfordshire into its new premises in 1970. In 1971, it was absorbed into the University of London’s Faculty of Theology, and in 1993, moved to its present location in Kensington Square.

The arrival of The King’s Fund

Nos 11-13 Cavendish Square were bought by The King’s Fund, which had long been seeking a single site for all its activities in place of its two separate sites in Bayswater and Camden Town.

Before moving into its new premises in summer 1995, The King’s Fund commissioned adaptations and new building from the architects Derek Latham & Co. The existing building was a disparate collection of structures, spaces and levels. The challenge for the architects was to create a modern office building that tied in with the 1912/30 building and to link it in a sympathetic way to the renovated 18th-century buildings.

The main entrance was re-located in the axis through Dean’s Mews, looking out on to Cavendish Square. A new stone portico added impact. Inside, a spectacular glazed atrium replaced an uninviting vertical service shaft and toilet block. This now allows light into each of the four floors and draws the visitor’s eye upwards, acting as a pivot for whole building.

To the right of the main entrance, a conservatory unites a variety of spaces. With its flanking courtyard garden, it provides circulation and informal meeting space. 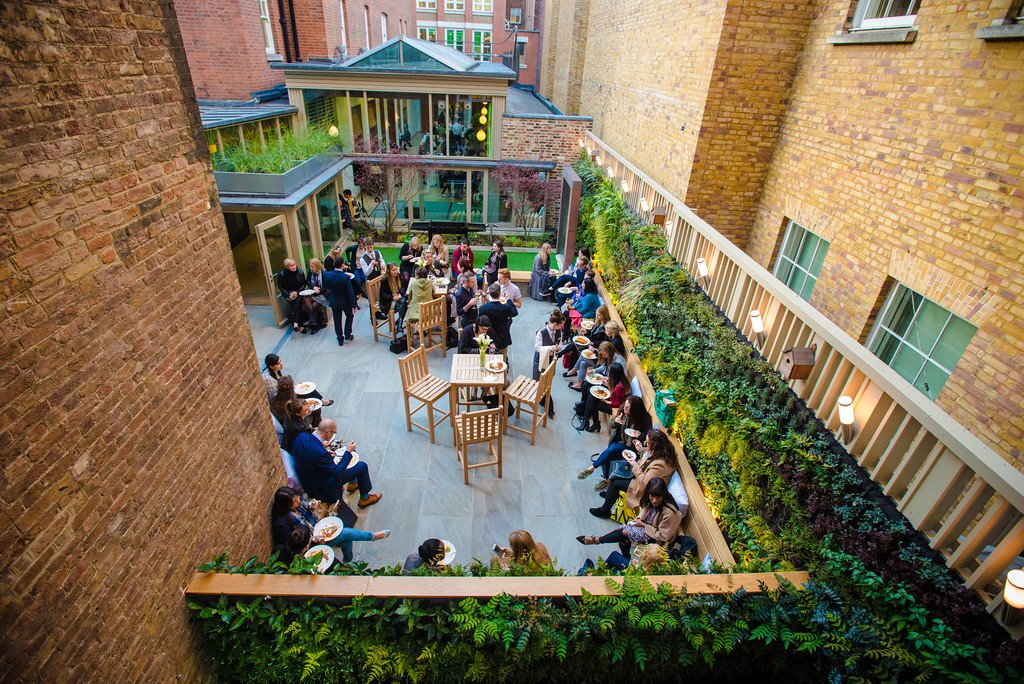 Find out more about the history of the Fund, from our establishment in 1897 through to the present day.
Completed project

2017 marked the 120th anniversary of The King's Fund. Find out more about the rich history of the Fund in our series of blogs and interviews.
Library blog

As we approach an election period when funding for hospitals will be a major issue, it's interesting to reflect on how the great London hospitals were established and funded before the NHS was founded.

Venue hire at The King's Fund